Hello.  I have a course with about 34 slides in it.  I've been moving them around quite a bit and now they are out of order numerically.  This isn't a problem except that occasionally it appears that a slide will add a "jump to next slide" trigger which then throws the Story View out of whack.  Is there a way I can renumber the slides so that they are in the "new" correct order?

Are you talking about your scenes in Story View? See if this helps get the order straightened out.

I'm still in an "old" mindset and so my 34 slides are all part of one scene.  (In retrospect I should have broken them up into a couple of different scenes.)  What I'm talking about is changing the actual number on the slides so that they are in order.  Thanks. 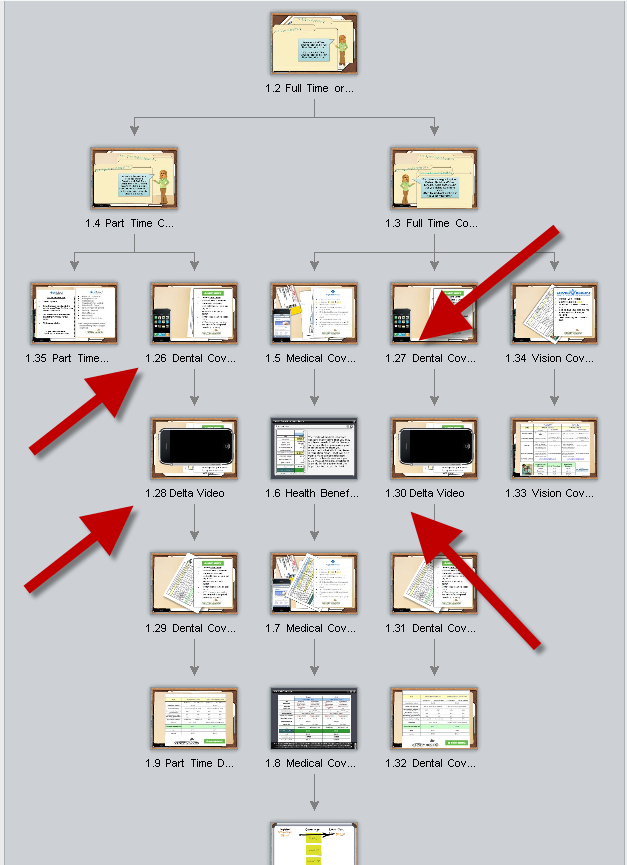 Peter sent the same video and it is helpful for the future - I now realize I should have broken my slides up into more scenes.  But it doesn't talk about if I can renumber specific slides.  Thanks.

I've seen the same thing, but to me, and YMMV

, it's just a number.  As long as the right slide is in the right order, that's the more important thing to me right now.  The learner doesn't see the number and if using the side menu, I can always rename (and renumber manually) as I like in the slide title itself.

Thanks, Gerry.   I appreciate your comments.   I'm certainly a newbie with Storyline so my take away from this is not a "fix" (because apparently I can't renumber the slides) but rather a new outlook at how to develop courses within Storyline so that the slide numbers aren't quite as important.

Well, I can see some folks wanting the numbering to be right so the course menu gets generated with the right numbers.  Just not something I've worried about (yet).  Until I get  that 100+ slide project that needs it.

I'd enter a feature request on this if you have ideas around this:  http://www.articulate.com/support/contact/submit.php?form=feature

I was having a similar issue and saw this conversation. I imagine you have moved past it, but in case it comes up again, here is what I ended up doing:

1.I looked at the menu (in the Player section) to first make sure the slides were listed in the order I wanted them to go in (regardless of slide number). If they weren't I reordered them.

2. Using the menu as a guide (and I ended up taking a screen shot of the menu so I could I have it open while looking at my slides) I used the "jump to" trigger to make sure the user goes to the right slide when they hit NEXT.

3. Back in the Player > Menu >Options, I selected "number entries in the menu automatically" so that way the slides are numbered in order for the learner, even though in the workspace the numbers are out of order.

Thanks for the good suggestion.  I can try that the next time I run into that problem.  Thanks!

So I can get past seeing things out of order numerically (even though it drives me a little nutty) but now I have to manually fix all the jump to the next page settings and if I decide to change the order of anything I'll have to update it.

So am I understanding correctly that there is no way to change the numbering? I read on one forum that you can drag them around in the Story View but that hasn't resulted in any change of numbering at all.

I'm talking about renumbering slides, not scenes so the video posted above has not helped.

Hello I have the same problem.  When using a menu in the player, the slides are out of sequence now that I have rearranged them in Story View.  There isn't an option to manually enter new slide numbers?

In addition, when you print to word - it prints in numberical order and not the order you created in the story view hierarchy,

While I can follow it, the document becomes useless to my clients who can't see out of order.

If you'd like to share your ideas for improving slide numbering in Storyline, our development team is always happy to hear them. Please feel free to submit a feature request.

I found a work around but it isn't pretty and it's tedious but for me it was worth it.

1.) Get a picture of the storyview hierarchy so you know the sequence you created.

2.) Make a copy of the file and work in this test copy until it is complete.  You can always go back to the flawed file if you need to.

3.) Make a duplicate of the slides within the scene in the NEW order you want it to be.   Don't be tempted to duplicate the scene.  It just recreates the same sequence with a different scene number.  NOTE: Every three or four slides stop and move them into a new scene.  Don't worry about the scene number, you can fix that later.

4.) Edit the triggers to jump to the slide you want (within the new scene # for now).

5.) If you have other scenes between the scrambled scene and this new mock scene then you need to delete these slides.

I know, if they are heavily developed, repeat steps 3 and 4 to push them out.

6.) Run a test of the mock scene to ensure that the jumps are working the way you intend them to.

7.) Delete the original scene that is messed up.

8.) Test this scene.  Most of the jumps will work.  I have one series that needed tweeking but it was easy fix because I had my storyview picture as a guide.

9.) Now delete other ORIG scenes until you are back to the order you want.  Ie.  Scene two was messed up for me.  Scene 3 was only a sketch with a few slides that I saved.  The others could easily be created since they were place holders anyway.  and Scene 4 and 5 had one slide each.  So I had no tears deleting those.

Now my slides and the word document are in order.  I learned that creating placeholders to develop later may not be the best plan going forward.  It would be better to draw them in a paper map and when ready to develop then click new slide.  This way the player will sequence the slide # in the right order.

Sorry folks - but this is the best that I could find.  Luckily, I did not have too much developed.  But scene two was so valuable for me, that I could NOT start over.

Yes, that's pretty much the best workaround I could find as well. I do find that, even with the most rigurous of planning, the slides can get out of order ... and sometimes I have no idea why.

So long as you are not too far into a project, however, it usually can be fixed in a couple of minutes. I think the key thing is to, as far as possible, try and make any necessarychanges as you go, rather than wait until the very end.

Did this every get fixed?

I have the same problem. I moved slides around within a scene. But the numbering did not change.

Now generate the menu and the slides show in the numerical order, not the actual order. This is unacceptable of course to the end user.

So now I have to use the various workarounds above?

Not logical. The slides should renumber when reordered.

Please let me know if there is an improvement I missed.

Hi Linda! We've got great information on scene order/numbering, but not slide numbering. It  would be great  if you sent it as a Feature Request.

Did this every get fixed?

I have the same problem. I moved slides around within a scene. But the numbering did not change.

Now generate the menu and the slides show in the numerical order, not the actual order. This is unacceptable of course to the end user.

So now I have to use the various workarounds above?

Not logical. The slides should renumber when reordered.

Please let me know if there is an improvement I missed.

While it doesn't change the number of the slides, you can manually change the order of slides in the menu so that users don't see an incorrect order.

The quickest method I have found is, in Story View, "Cut" the slide that it out of sequence, select the slide that should come BEFORE it, then "paste" the rogue slide. So long as the slide before has a trigger to "jump to next slide" set, it should pop straight in and be numbered appropriately.

Thanks for the suggestions.

It's a great group here! Just pop back in if you need further assistance

Another example - I was just playing with this issue this past weekend.

Basic drag-and-drop should be a function of this application, not a feature. Most IDs experience changes to content and rearranging slides will be an often-used function! This is an issue that needs to be fixed. Thanks!

Or create a new blank project and cut and paste your slides/scenes in the order you want them to appear then delete the old project??