Since we've updated to Version 6 and gone back and republished much of our content we've noticed that the seekbar, pause, and replay buttons don't work the way they did in update 5. They seem broken

Pause Button - The pause button pauses audio and video the way it should but the unpause (play) button doesn't start the audio or video again where it left off. It continues the timeline but without the media. For video you have to click on the video to continue the video. For audio, I can't make it continue where it left off.

We're using Storyline to develop math lessons for kids and kids use the pause, seekbar, and replay buttons a lot to review steps of solving problems and as they work along with the audio/media explaining math concepts and skills. These are important features for us to work correctly.

Is anyone else having these issues?

By the way, we're using Storyline's HTML5 output. Flash is not an option for us.

Thank you, but the revisiting property of the slide is set as " Reset to initial state" still it does not seem to work :(

Could you share the .story file here (even just that one slide) so that we could take a look and see what issues you're describing and how they're impacting your .story file?

Sorry, I could not share the file as it's confidential.

If you're unable to share the file here publiclly you could always look at recreating the behavior in a sample file that you can share or sharing it with our Support engineers here. They can sign an NDA if needed.

I guess the problem was that the file was upgraded from Storyline 1 because I tried recreating the issue in Storyline 2 but I couldn't.

I'm glad you weren't able to replicate the issue so hopefully it was just that one file. If you run into it again while upgrading your SL1 files to SL2, please let us know.

This thread was useful.

Thanks, Amma -- always glad to hear when an older post is still coming in handy! :)

Could you share a bit more details and perhaps your .story file so that we can see what's going on?

As per the discussion we had earlier i am sending you the source file for the same. The main problem I am facing is seekbar (play/pause) is not functioning properly after the second attempt whereas I have already allows the seekbar to YES.

Hi there Bhupendra- we'll take a look at your file and see what's going on.

So what I see in your file is that once you return from any of the layers, the timeline on the base layer has already run out.  If you click the little "restart" icon on the seekbar, the timeline will restart and you'll see the progress in the seekbar again.

Alternatively, if you want that base layer timeline to just restart automatically when you return to it, you can change the triggers on the layers from "hide this layer" to "jump to slide" and just go back to that actual slide.  If you set the slide properties to always reset to initial state, the timeline will restart after each layer is visited. 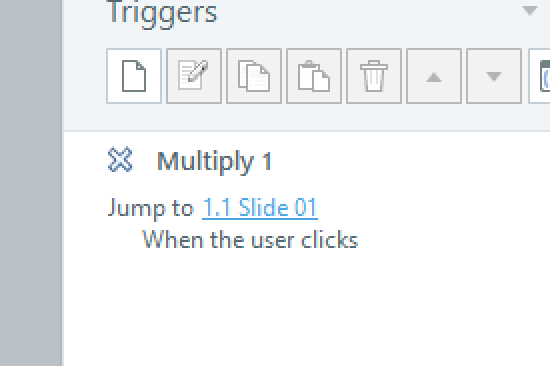 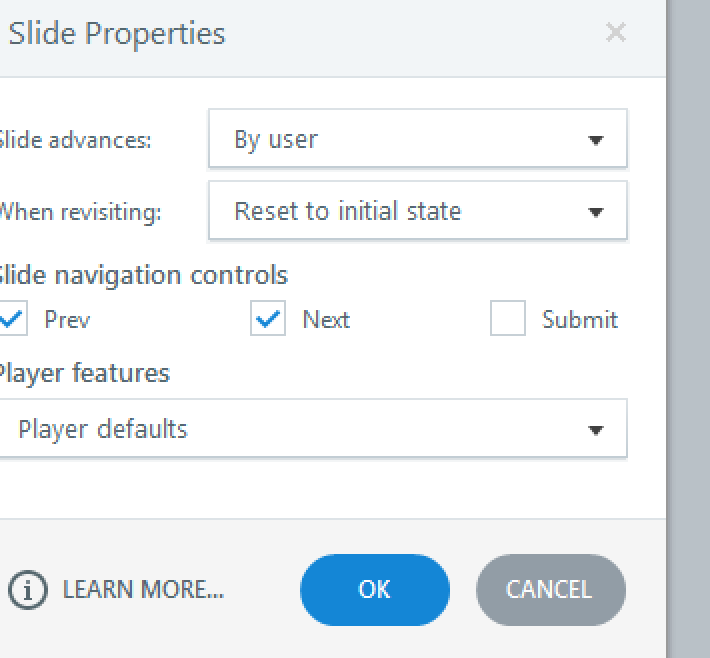 Is that what you had in mind?  Your adjusted file is attached!

Ashley - My team is experiencing the same issue with the seekbar and replay not working.  We have 2 scenes and six slides within each scene.  For all of scene 1 EXCEPT the last slide, the replay and seekbar works fine.  Scene 2 has two slides that don't work.  I looked at the Player, player/slide settings all are set the exact same way.  I checked Content - does one have more than another.  Only one slide is very complex with multiple Lightbox Videos, but the others are just plain Text boxes...  Nothing stands out as to why this is happening.

We're using V3.14.15225.0   We know that a new update was released today or yesterday but haven't had the chance to update as our Net Admin is out and it requires Admin credentials to run the update.

We can see this has been an issue that happened 3 years ago... What was done to fix this.  We're supposed to go Live production with this material and I can't send it out not working.

Thomas. I'll see if I can help. Is there any way you can share your .story file? Or at least the slides that are problematic?

Thank you for the quick reply. Sorry I didn't answer sooner but I was teaching a class and was unable to break away until now.

The Story File is 2GB in size with multiple Videos contained. I'm unable to send through an Email, but I might be able to share the file another way.

I assume that you sent a private message to Trevor.

If you need our team to take a look, you are welcome to share privately here.

Thank you Leslie... I thought when I replied to the Email that it was going to email and not posting here.

Did you happen to get the links I sent you?