Seekbar - seek position not showing during replay for audio on a layer.

Anyone can tell me why the seekbar - seek position only show progression during the first play attempt and not on the replay attempt.

Here is what I have going on:  I have a button that is set to show layer "audio". The layer is set to hide after media completes.  If I select the play button on the first try, the seekbar show progress.  On the second or third, the seek bar - seek position doesn't show up until the audio stop. 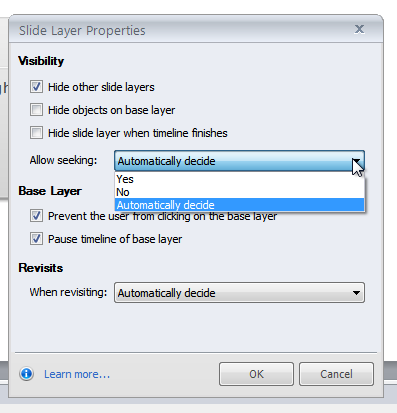 I have those setting check.  I include them on my attached file.

have had a look and I can't see what the issue is...sorry I couldn't help.  I don't normally put audio on another layer so I am not sure what the expected behaviour would be

I do see a similar issue that was reported to our Quality Assurance team in regards to the seekbar on layers not resetting or indicated where the user is if they've used the rewind button.  So I'll link this thread to the issue as well so that our team is aware of other users being impacted.

Has the seek bar issue been resolved?

Looks like an old thread but I am currently having this same problem. Has any progress been made on a resolution to this issue?

Hello Anne - Looks like I responded to a similar thread here.