Set a required visit time that's less than the timeline?

In the courses I offer that are required training, each slide must be visited and a quiz must be completed.

It's frustrating to be held on a slide after we've finished reading/interacting with everything. That said, I don't want learners to be able to simply click 'Next' to blast through from one slide to another to get to the quiz.

All of my slides have the text narrated. I want course participants to have to spend at least some time on the slide, but not have to wait until the timeline (narration) ends. Some slides have required interactive elements; the 'Next' button is disabled until they are visited.

Here are the requirements that learners must meet before accessing the quiz:
1) Visit every slide.
2) Access each interactive element on the slide (where applicable).
3) Spend at least some time on the slide (even if it's ten seconds).

I've got the first two elements figured out, but not the third. Can a trigger be set requiring a visit time that is less than the timeline?  Is there a way to do this, and combine this requirement with the other two?

Thanks very much for any suggestions.

Could you set up a shape off screen and then have the next button become active when timeline ends on shape offscreen?

I would definitely use the method David mentioned, and for those slides that have items you'd want them to interact with first, you could follow this method here.

Thanks for this, David and Ashley.

That trigger is working on its own (very cool). I just need to get it to work with the others (i.e. requiring that they access each interactive element on the slide, and that each slide be visited).

I'll go off and try some other combinations. If I can get that to work, I'll post the process I used here. If not, I will likely be back for more advice!

Did you look at the method I previously shared on how to disable the next button until they've interacted with all elements?

Thanks, Ashley. Yes, I'd read that tutorial before posting, and that helped me set up part of this project I'm working on.

I finally found out that I could set up a trigger to adjust the variable for a specific object when its timeline ends. Here's how that looks: 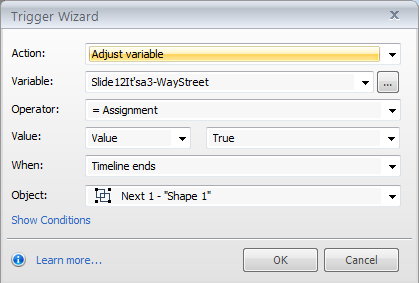 I set up a variable for each slide in the scene, naming that variable the same as the slide, preceded by the slide number.

As David suggested, I created a shape off-screen and set its timeline to the minimum time I wanted to the person to see the slide (much less than the time taking for the narration, to account for the speed-readers out there).

I added in a message that appears if someone tries to click the 'Next' button before the timeline for that object is complete, and if all other elements in the slide have not been visited (as outlined in this thread and the linked clicknext.story file: http://community.articulate.com/forums/t/35045.aspx

Now it's all working as needed!

If anyone wants to do the same thing but finds my explanation unclear, just ask and I'll try to lay it out better.

Thanks, David and Ashley!

Thanks for the update Allan, and glad you got everything working as you wanted!

Glad to be of assistance!