Shift Selection Focus from Timeline to Canvas in Storyline 2

Is there any way to make a selection in the timeline and then keep those elements selected in the canvas/main window?  This would save soooo much time.  If I want to select something in the back of the layer order, I have to move it to the front in the timeline or turn the visibility off for items in front of it.  It would be so useful if I could just select an item in the timeline then use the arrows to move it around (not in the timeline, but move the object's position visually).  I've already submitted a feature request.

While on the subject, an essential feature would also be to have the timeline update according to where the playhead is, in edit mode.  Right now we basically have to  preview over and over to see any changes.  Are there plans to have the canvas update according to playhead position while in editing mode?   I've also submitted a feature request for this.

These two features would save so much time on a daily basis for me.

I can definitely understand how that would make life easier, and that's a feature that I'm sure many of our users would benefit from. Thanks for taking the time to submit a feature request!

And for your second idea, that's one I've seen mentioned a few times in the forums, so you're not alone there! I appreciate you sharing your perspective, as that gives us a better idea of how in demand the feature is.

Thanks for the reply.  I did discover a bit of a workaround for issue one!  You can select an item in the timeline, then press control + enter (or control + shift + enter) to bring up a dialog box.  Then press enter again to close the dialog box.  This usually shifts focus to the canvas where I can adjust elements.  This made me very happy yesterday!!

I would just adjust in the dialog box but it's easier to move items around visually than typing in pixels.

Another great shortcut would be 'move selected item to front/back'.  There's not one currently right?

And yes, there is an option to right-click on an object in the timeline and select Bring to Front/Send to Back. I hope this helps! 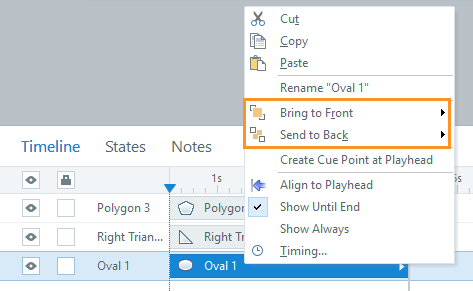 Cool thanks!  I use the right click method but am looking for more of a keyboard shortcut.  It would be great if you could move up/down in the layer stack or to front/back (like in Illustrator).

One more thing, is there a way to move more than one layer at once up or down in the timeline stacking order?  The only way I have found is to group, move and then ungroup - or move layers one at a time.

Ah, I see! Here is a list of all of the built-in Storyline 2 keyboard shortcuts, but that list does not include a shortcut to bring an object to the front or back.

And you're right, there isn't a way to move a "stack" of objects on the timeline. Like you said, you'll have to group them first (Ctrl+G), move the group, then ungroup them (Ctrl+Shift+G).

Awesome! That totally works.  I kind of forgot about the toolbar.

Point at outline on canvas and wait for 4-headed arrow.

Pause long enough to take a breath (This makes a lot of things that don't seem to work in SL function correctly. SL just needs a moment to register.)

If you are accurate enough positioning the cursor on outline, this usually works.