I have attached a simple example. I want for the layer labeled home to show only after I return from viewing the other layers that were triggered from the markers which will now be in a visited state. Is this possible?

I have attached a version of your Story that I believe meets your request.  Basically, I just added this trigger to 2 of your layers. 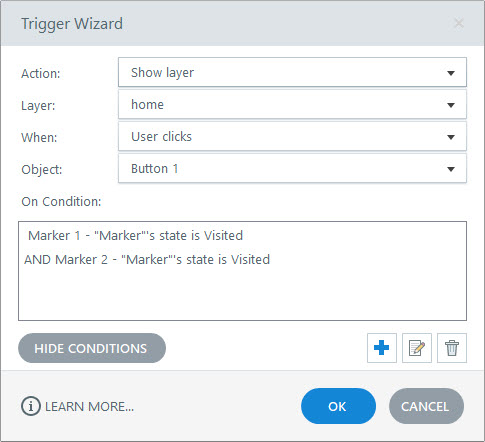 I see Ron did a new version. I was working on another approach, one that adds a trigger to the base layer to show the home layer on start of the timeline when the conditions for the markers are set to Visited.

Different ways to skin the cat...

Ron/David, thank you both very much. Learning a lot more about variables. As some of my "markers" jump to other slides and not just layers (sorry I didn't add that in my sample story) I wound up going with David's timeline approach. Seemed to do the trick. Thanks again.

Ron, you were right on regarding using the timeline method when using layers, that was a bust. However, since I have five total markers - two that show layers, and three that jump to slides, I was able to incorporate both methods and it worked out great. Thanks again to you and David.