We've been using Articulate/SL since about 2009.  We don't like to post negatively but the problems we experience with SL are getting worse every year.

We have reached to the point that we spend hours reworking around issues, posting problem reports, and getting customer complaints.

The bugs in SL delay our delivery schedules.

Today's issue: Creating a "Reset Results" trigger crashes SL.  We've uninstalled, reinstalled SL.  Same thing.  Now it's off to create a new project in the hopes that importing the old project will resolve the issue.

Maybe it will, maybe it won't.

SL Tech support gave us a proposed workaround which didn't work. What we would have liked to have heard from Tech was: Yes, we found the problem and it will be released in the near future. A patch is on the way to you.

This might be a legit bug and it can't detect the Results Slide after closing this alert box. 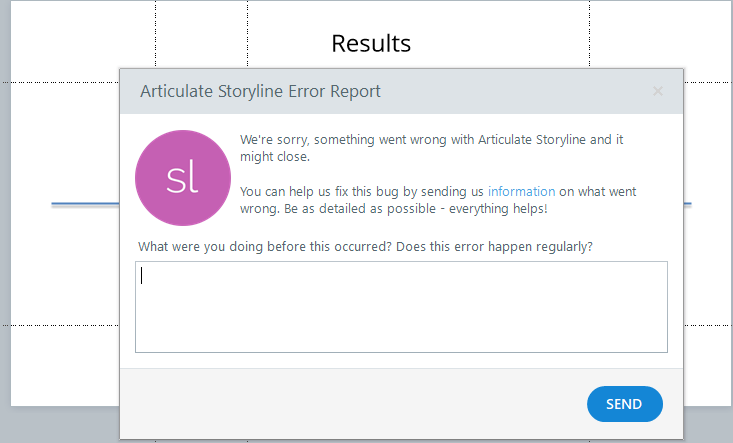 I'm sorry you ran into an error earlier today, and I actually ran into the same testing another customers file. It didn't crash or freeze Storyline, but I saw that error message every time I tried to add a Reset Results trigger to the Reset button she had added. This also is only occurring in Storyline 360, build 3.23.17480.0 so you may roll back to an earlier build if needed.

If I inserted the built-in button from the Results slide, and the trigger was automatically created, I didn't have any trouble with it.

The issue has been raised with our product team, and I've linked that to your case and this discussion. We'll keep you posted here.

I'm sorry you ran into an error earlier today, and I actually ran into the same testing another customers file. It didn't crash or freeze Storyline, but I saw that error message every time I tried to add a Reset Results trigger to the Reset button she had added.

That was a workaround that I was trying for a while.  When an abort message occurs, sometimes, maybe most times, the project is OK, but who knows. As a third party developer, how would anyone feel delivering a published package to a Fortune 500 company when an abort occurs but everything *seems* fine?

In other news, We were copy/pasting some Notes revisions in SL 360 today and it froze so much we decided to reboot after spending enough time trying to get things going.

Funny thing, the reboot made SL issue a prompt to SAVE/DONT SAVE/CANCEL the project.  Of course we saved.

Hi there, Sam and Daniel. Quick update that we just released update 24 for Storyline 360! It includes new features and fixes - check them all out here.

One of the fixes addresses an issue where manually adding a reset results trigger to your results slide caused Storyline to crash.

Here’s how you can update Storyline 360 to take advantage of everything the latest release has to offer. Let me know how you make out!