Slide layer for correct answer not showing up

I am spinning my wheels here.  I have a drag and drop interaction.  With much fiddling, I've gotten it to the point of having 2 attempts, with the try again layer coming up after the first attempt, and the incorrect layer coming up after the second attempt (phew!) but my correct layer is not showing up when the answer is correct (whether it's the first or second attempt).

I'm new to Storyline, so honestly, it's a bit of a miracle that I've gotten this far, but I just can't figure out why the correct layer isn't happening when the correct answer is submitted.

My original thought was to set a variable that would change once the answer was evaluated (by clicking submit) and determined to be correct. But I can't find a way to do that either.

Attached my file (it has a shortcut on the second slide to go right to the slide in question).  Any help would be greatly appreciated.  This is my last issue with this course!

If you rename the layer to correct it should work

Thanks Phil, that seems to have done the trick with the correct layer showing, however, the other incorrect layer isn't showing properly now.

Any insight as to why it needs to be named in a certain way?  All of my other quiz slides have the name as "Yes!" and work fine.  It wasn't even a thought that the name of the layer could be an issue!

I'm experiencing the same issue though I don't think re/naming the layer is the problem. When I preview the interactive slide and match the target to the item(s), and match them correctly and submit my response I get "Incorrect - You chose a wrong response" as a failed atttempt?

I wouldn’t have expected you other layers to work. So it is bonus they do. I think you can set a custom layer in the form. I just keep it simple whenever I can.

Hi Lindsay – Storyline may not recognize which layers you want to use for Correct or Incorrect answers if you have custom layer names. Let us know if you're still struggling with those layers, and we'll take a look!

Hi Iris – it sounds like there's something else going on in your file. Mind if I take a peek inside to see what's causing the problem? You can share it publicly here, or send it to me privately by uploading it here. I'll delete it when I'm done troubleshooting.

Thanks for sending me your file, Iris! I just replied with a Peek screen recording to show you my testing. We can keep the conversation going in your case, if you'd like!

HI there, I am trying to get the Correct response to show up after the last drop in Drop Target 01. But can't seem to make it happen. Can you help me ?

Hi, Elizabeth! Thanks for sharing your file.

On slide 1.2, you need a small adjustment to the trigger. This is what the trigger should say: 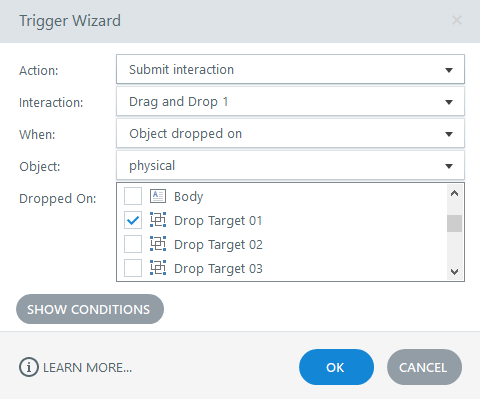 Let me know if that helps!

I see this thread is a bit old, but I I'm having a similar challenge with setting up layers to behave as needed with a freeform drag and drop question and I was hoping to get some help!

There are 6 terms which need to be matched with their corresponding correct definitions.  I've kept the default layers on the drag and drop question format, as well as one additional layer, correct answer.  I only need three layers, one correct, one incorrect, and one that shows the correct answer after two incorrect attempts.

The correct answer layer to show up when the learner has correctly matched all of the terms to their correct definition, regardless of which 'attempt' that happens on.

1. The current setup prompts the incorrect layer to appear regardless of how many attempts the learner has done, and even if the second attempt is correct.  When I remove the other layers except for the correct layer, and then preview, the slide functions correctly when the term is matched with its correct definition.

Thanks for sharing your .story file so that I could take a look.

I walked through your file and recorded this quick Peek 360 video of how you can get this to work as intended.

Your updated file is attached.

Hi Leslie!
Thank you so much for your help, and for the helpful screencast video.
I tweaked the file slightly so that the correct answer layer shows up after attempt count is greater than or equal to one, instead of the incorrect layer as I believe was initially in place.
I need to give it one more view to make sure everything is now still functioning as intended, but it looks like it's what I needed! Anna reached out to me with another possible solution.
Thanks,