Anyone experienced something like this before? I tried copying my layer content to a new layer and it hasn't helped.

Thanks in advance for any help.

Do you have this setting checked on your layer properties? It may be that your layer is pausing the timeline on your base layer. 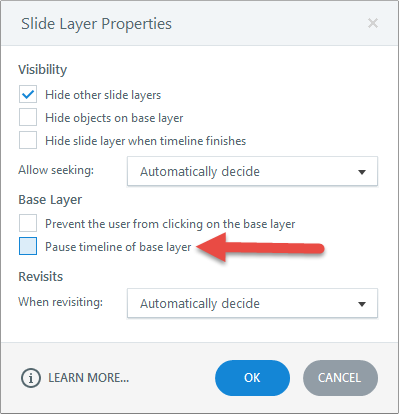 I think the seekbar only follows the timeline of the base layer, so if its being paused then it shouldn't move. Maybe by hiding the base layer automatically pauses it?

Just throwing out some ideas, I haven't observed this issue before.

I doubled checked and no, I do not have the "Pause timeline of base layer" box checked. Here is a snapshot of my layer properties. 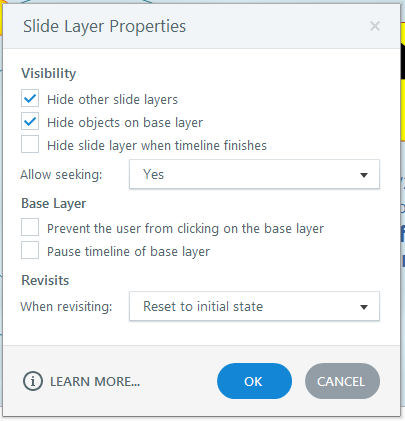 I have the same properties set for all of my slide layers in this project. It is only two slide layers, on my 5th slide, that are having the trouble I explained before. Slide layers on other slides are functioning normally. Very strange...

Hi, Matt -- Sorry to hear of the trouble you are having! Can you please confirm that you are working locally on your C: drive as described here? If you happen to be working on a network drive, you could experience corruption or unexpected behavior.

Also, it might be a good idea to try importing the file into a  new file to see if you find improvement, and it could be helpful to run this  repair if you are still having issues.

Please let us know if those suggestions do the trick, and you are welcome to share your file if you would like us to take a closer look.

I am working directly from my C: drive. I tried importing the slide in question into a new project and it did not help. I ended up using a work-around of making my slide layers their own individual slides, that I will just keep hidden from the player menu. For the moment, I am back in business. If I encounter something like this again I'll be sure to post about it and try the "repair" you mentioned.

Thank you for the response.

Awesome, Matt -- thanks so much for sharing the workaround you are using, and please let us know if you should need further assistance! :)

Hello, I am experiencing this issue as well.  My layers will not appear as programmed by trigger over the video.  I am aware of the work around, but the layer offers me further interactivity I want.  Please advise if this is a bug, to be addressed in an update.

Would you be able to share your .story file so that we could take a look at the issue you are experiencing?

Yes, please advise on this process, or whom to share with.

You are welcome to share right here in the forums via the 'Add Attachment' option in your reply.

The file is attached - the layers are not quite arranged where I want them, so is is a little messy.

Thanks for sharing your file and allowing me to take a look.

The triggers to show the layers should be on the base layer, not the individual layers.

This is why you are not seeing them as expected.

Of course Lynn! Just wanted to mention that replying to the forums via e-mail attaches your signature. You are welcome to pop in and edit if needed.

Fixed the triggers, still no luck! 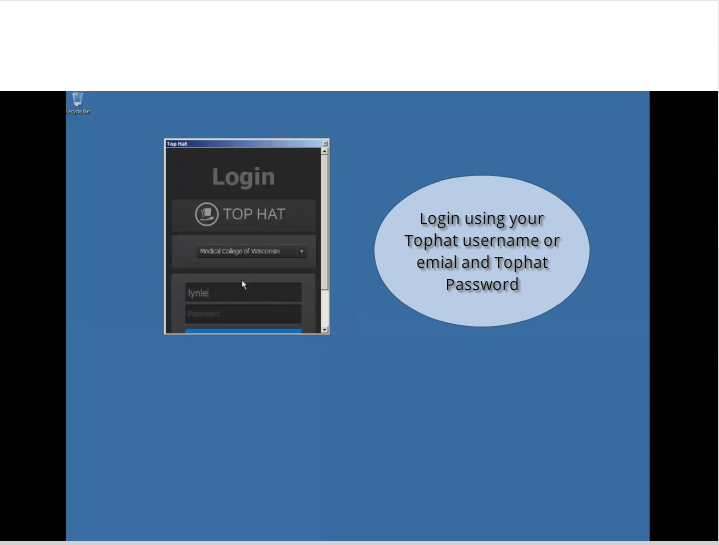 I just checked your first trigger and layer to login.

Hope this is what you mean

So, my mistake was setting the layer to time-code on the timeline?  Should all layers just be set at the beginning of the timeline, and let the trigger define the view-able time?

The timeline that shows when you view a layer is specific to that layer. It governs  when activities take place on the layer, after it becomes visible.

Ah,  thank you, I now see the error of my ways.