I have a slide with several images, each of which have a trigger to show a layer when the image is clicked. I have each layer set up so that when the audio associated with the layer finishes, the layer is hidden and the learner should see the base slide (and they can then select another image). What ends up happening is that when the audio completes, the base slide appears but without the images.

I have another, similar slide in the same presentation but instead of images, there are buttons that the learner clicks. This slide works as it should (the buttons reappear when the audio on a layer completes).

Any ideas as to why the images do not reappear?

What are the trigger settings for ending your layer?  Have you considered light boxes?

Hi. I tried adding a trigger to hide the layer when the media finishes, but the same thing happens. The layer hides, but the images on the main slide do not reappear.

Using light boxes or even separate slides might be what I end up doing.

If you use the "Show Layer" and "Hide Layer" triggers, it should be exactly the original layer should be the same when it goes back. 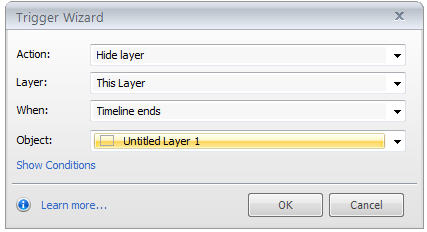 That is what I tried but for for some reason the images are not showing up again.

I ended up using a work around that changes the initial plan for the slide, but communicates the content.

Thanks again for your ideas!

I wonder if there was an animation for your pictures to fade away at the end of the original slide, so they were gone when you returned.

Thank you for chiming in Phil. I changed the slide already, but I do recall checking on that and I am pretty sure there was the arrow (they definitely extended to the end of the time line). I might try to recreate it and make sure they go to the end.