I'm currently using the built in Slide Number feature to display the question number for an assessment/question bank I'm on working on. Specifically, I'm using the slides viewed in scene (Scene.SlidesViewed) variable.

Each question in the question bank contains a variable reference to Scene.SlidesViewed. This part works like a charm; however, I run into issues when reviewing the quiz. The Scene.SlidesViewed variable gets stuck on the last question number. For example, when reviewing a question draw with five questions, the question number is always five. I tried resetting the variable, but then it gets stuck on the value I reset it to (i.e., one).

Is there a workaround for this issue or a better variable to use?

Happy to help! It sounds like you’re using the 'Scene.SlidesViewed' variable in your quiz to display the question number, and that it’s getting stuck when you go back to review the quiz.

Have you tried using the Slide number in scene feature in your question bank while setting the order to Project Order? You can find this by going to the Insert tab, click Slide Number, then select More... 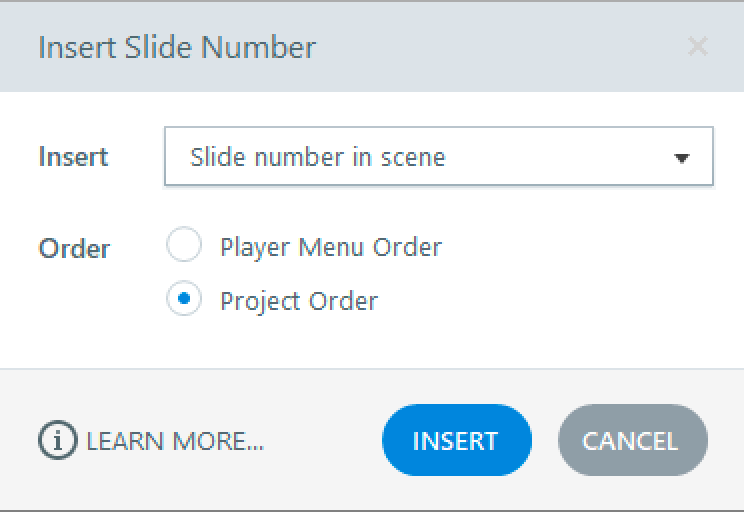 This video shared by one of my team members excellently displays using this method. Take a look and see if it works for you!

Sorry, I was not clear in my initial post. I am currently using that functionality. It works great; however, it does not work when I try to review the quiz. The video does not cover this.

Thanks for clarifying! It would help to take a look at your .story file to see the triggers you've set up and if there is anything getting in the way of their behavior.

Are you able to share a copy of your file with us? If so, you can upload at this link using the Add Attachment button or you always have an option to share privately with our Support Engineers. Either way, we'll delete it when done testing.

Related to this topic, do you have any ideas on how I can transform the variable "scene.slidesViewed" or "slide number in scene" to build a progress bar for each of my scenes?

I currently have a manually built progress bar (slider) for each of my scenes (I set the value of the bar in every single slide) and I just found out about the existence of all these built in variables that potentially I would be able to use to avoid the manual progress bar.

Amaia, I did something similar for my question bank. The trick is to setup your progress bar using states and triggering them using conditions.

I included all instances of my progress bar (10%, 20%, 30%, etc.) in one shape as separate states, then have a trigger on each slide that says something like:

Change state of Progress Bar to State 10% when timeline starts IF variable Scene.SlidesViewed is equal to 1.

Change state of Progress Bar to State 20% when timeline starts IF variable Scene.SlidesViewed is equal to 2.

There may be other ways to setup this up, but that's how I did it and it seems to work fine. To make your life even easier, try building this into your slide master so you don't have to add these triggers/conditions to every slide.

Thanks for your message!

I think this would be a workaround in some cases! I will keep it in mind :)

However, I think in my case this would be almost as manual as editing the slider in each of the slides because each of my sections has a different number of slides and therefore the percentage of the same slider would be a different one for the slide number; unless I changed the slider length in each section, which again is quite manual.