I have created a screen in Storyline with a slider that has three elements (Away From - Neutral - Towards). When the user drags the slider circle to the left, an Away From example appears (this is built into the state).

The above works fine with one slider. However, I have five sliders on the screen (and a total of 10 popup examples). If the user works through the examples in sequence, it works fine as they stack on top of one another. The problem is that if they forget to move the slider circle back to the middle, and decide to review an earlier example, it is hidden in the stack of popups. In the screenshot below (ignore shading on sliders!), I worked sequentially through each slider popup (2 per slider) and then decided I wanted to view the example for Status - Away From. However, it won't show it to me because it's registered that the Fairness (Away From) popup is the overriding one.

How do I work around this? I tried to add a Close button to the states with example popups but Storyline won't let me add a trigger. I thought about adding a hide layer to the circles but I will have to create a crazy amount of layers for it to work and I'm not sure that's the right way. Unfortunately I can't upload my source file because of firewall issues. I may be able to add it from home later. If you have any suggestions at all, it would be great to hear from you. Thanks. Without seeing the actual file it's tricky to provide more than a guess. From your description, it may be better to move the example popups into layer rather than having them be part of the slider states. This way, only one layer at a time would be displayed and that I think would fix the overlap issue.

Hi Michael. That's what I originally did but if the user dragged the slider from one end to the other without stopping in the middle, the popups didn't update. It was only when they dragged the slider circle back to the middle and then to the left or right, that it triggered the popup. I will upload the file tonight with the two versions of what I did. Hopefully that will make it easier! Thanks.

Haven't had any luck uploading it here so I've put it on Dropbox: https://dl.dropboxusercontent.com/u/8480121/SliderEx.zip

I couldn't open your file in SL (v4) so I tried importing but that produced an error: 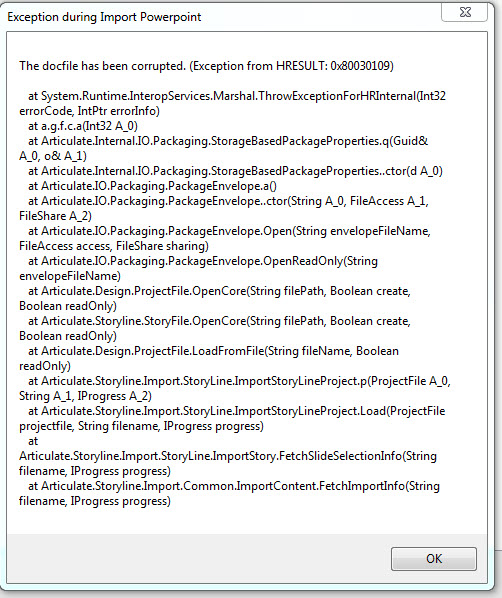 Not sure if this is a Dropbox thing or maybe something connected with the zipping?  The original file is 191Mb and the zip is only 30Mb, so that's a heck of a lot of compression going on there.  If everyone else is experiencing the same issue, could you upload just the slide(s)/scene(s) that need reviewing?

Not having any luck with the Storyline file. It keeps crashing when I try to upload to Dropbox. Might have to resort to Plan B and add a Reset button. Thanks for all your help.