I am working with a slide that has multiple layers that fire as the slider moves.  I've done this successfully once in my training, but for some reason the second version isn't working properly.  I cannot seem to get the slider to function properly.  It doesn't move the way it should when I click and drag.  It delays and doesn't move, then jumps erratically from stopping point to stopping point, in no discernible order as the slider jerks and jumps around.

One my first attempt, the slider is responsive.  It slides as it should and stops at the 4 stops I have set.  But the slider on my other slide doesn't work the same way.  I've tried deleting the slider and starting from scratch, but I ran into the same problem.

Has anyone else struggled with an unresponsive slider?  Does anyone have any suggestions for how to fix this problem?

Hard to say what's happening without seeing the file Jill, but perhaps check this option on both sliders. If that doesn't work, perhaps you can upload the .story fie or even just the slides with the issues so someone can try and help you. 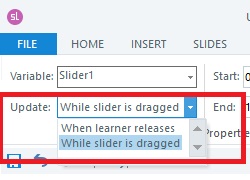