I am still learning my way around Sliders and Variables, so this may be one of those, "Well, Duh!" questions. I know you can set a trigger to act when the slider moves to a specific step, or when between specific steps. My question is, how can you get it to act when it is NOT between specific steps? For example, let's say I want to show a layer when the slider moves and is between steps 2 and 5, then hide the layer when it is NOT between 2 and five. The triggers would, in theory, look something like this:

Since there is not a "not between" setting for the trigger, is there another way to do that? The problem I have is that I have a series of characters that are different lengths, XX - XXX - XXXX - XX - XX - XX. I want to allow the user to easily move the slider to the center of each set of characters to trigger a layer explaining what the characters represent and to hide the layer when the move off. Since they are not equidistant I have set the steps to 0 -48. The result works but a heavy handed mouse user might have difficulty setting the mouse to just the right step to show the layer. Any ideas?

Would this work for you? 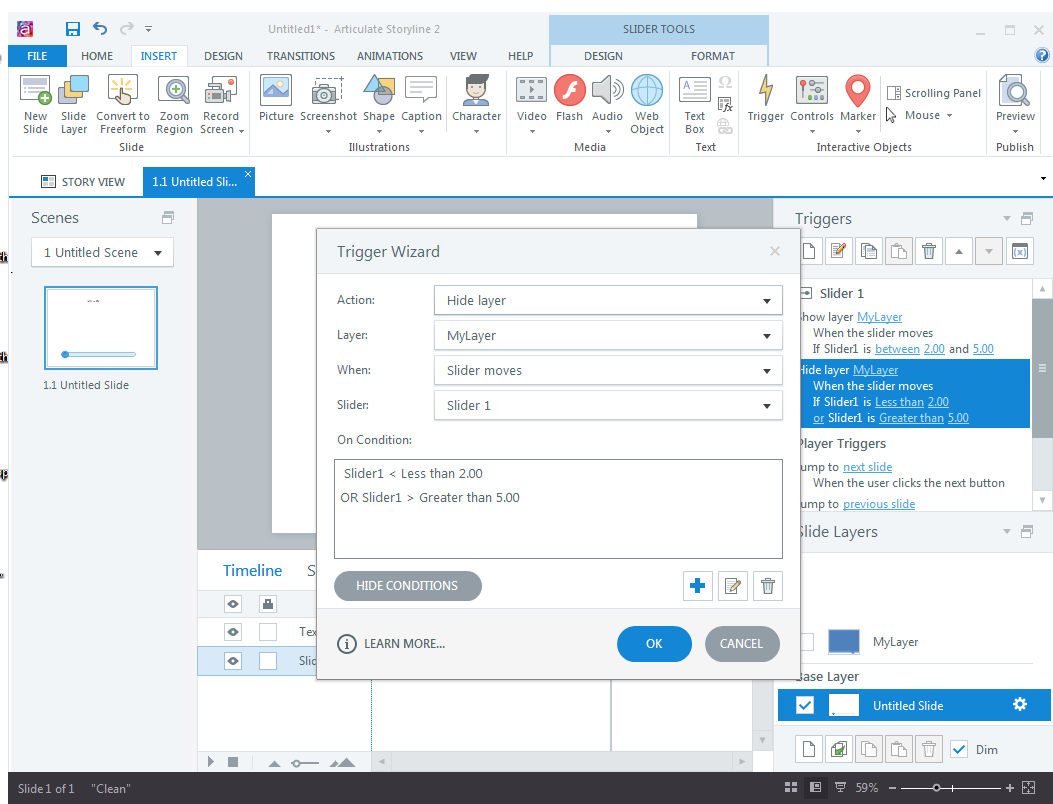 Yes, that seems to do the trick! See, I said it would be one of those "Well, Duh!" questions. I did not even think about setting conditions to accomplish this.

Great to hear that it works for you. Good luck with your project!

Since you are still new to Sliders, I thought you might be interested in some examples, see here.

Great stuff! I especially like the last one where there are two ways to move the thumb. Also, did not know you could set steps in units less than 1. Thanks for the tips!

Glad that Michael was able to assist you here Edward :)

Me, too. Hope I can get good enough to play it forward.

That's what the community is about Edward :) I'm sure you will.

Hey, these are some pretty cool examples of how sliders can be used.

Is there any possibility to see the source file for these, as there are a few of these which I would like to use in my next project.

After spending several hours over the weekend trying to figure out how these were done, especially the last example showing two ways to move the slider - I'd also like to know how he built the custom slider thumb and track, think I know how but would love to see Michael's solution - I, too, would love to see the source file.

Hopefully Michael is still subscribed to the thread to see your requests for his source file, but if you don't hear back you may want to use the "contact me" feature on his profile to reach out directly.