Hi there. I'm going to do my best to explain my situation.

I have a slide in which a 10 step procedure is outlined. So there are 10 buttons, one for each step. When they click on the button, a caption (different layer) appears and explains the respective step. I really don't like how choppy the transition is. When the user clicks on Step 1 button, I want the other 9 buttons to move smoothly off the slide, or fade out, or honestly anything besides suddenly disappearing. I can get the layer to appear smoothly, but I can't figure out how to move the other buttons off the slide without 100 triggers. I was initially thinking motion paths but I would then have to create 9 triggers for each button just to move them off the slide and another 9 to move them back on when the user closes out of a specific step. I feel like there may be an easier way to do this, I just can't come up with it. Any suggestions?

Thanks! Y'all are the best.

See if this helps.

Oh my lord. Thank you SO much!! It took quite a bit of figuring with the audio but I got it settled. Could not have done it without your help.

Glad you got it. Pass it on when you can.

Hi Walt, I'm new to Storyline and was looking for information on transitions the other day. Your solution is exactly what I need in my presentation, but I can't get it to work. I have copied all triggers etc exactly, but I could get only one layer to show, and there was no moving out to the left (i.e. the shapes that hold the title of the layer to go to) when clicking the layer, and moving back in when returning to the Menu layer.

I also tried to copy your shapes, and add triggers to my layers - the shapes float in nicely, my layers show, but when closing the layer the shapes do not float back in on the Menu layer. All I get is an empty page which seems to be the empty base layer. What am I missing here? I've spent half the day trying to figure it all out, but now I'm giving up hope that I can do it on my own.

Any help would be greatly appreciated!

Part of the magic is with the shapes. They have the animations to fly in and out when they enter and exit. They enter when the Menu layer timeline starts and exit when it ends.

The other part is with the timing. The menu layer timeline pauses prior to ending. This is because the exit animation is .75 sec, and at .75 sec before the object exits, it begins its exit animation. The sequence when the menu layer is shown is:

10. When timeline ends, new layer is shown, depending on which object is in selected state

12. New layer hides itself and shows Menu layer, which repeats the sequence from step 1

If that doesn't help, use the gray add attachment button to attach your slide here, and I'll take a look at it.

Thank you Walt, I'll add my .story. I had completely missed to check the animations, but still the entrance and exits do not work for me. Happy to have you look at it.

Set the menu layer to reset to initial state on revisit. That causes its timeline to start from the beginning. 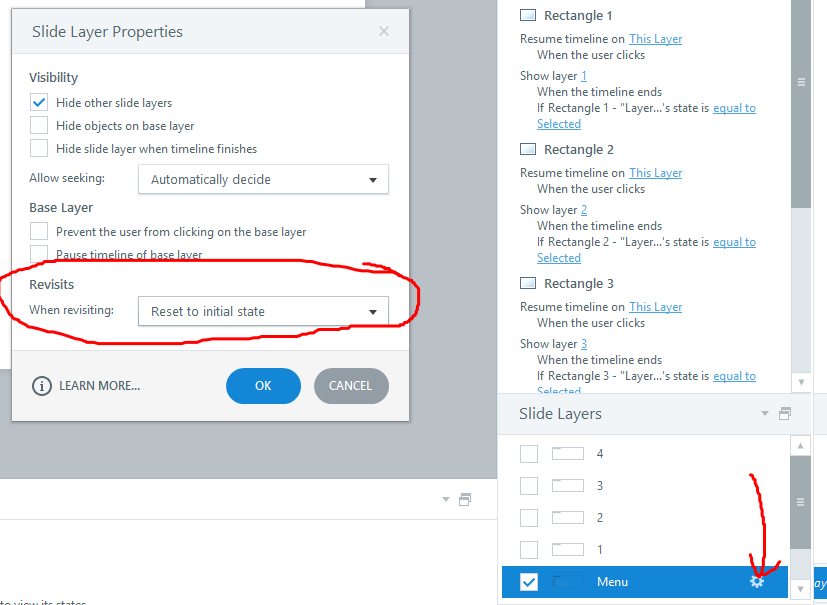