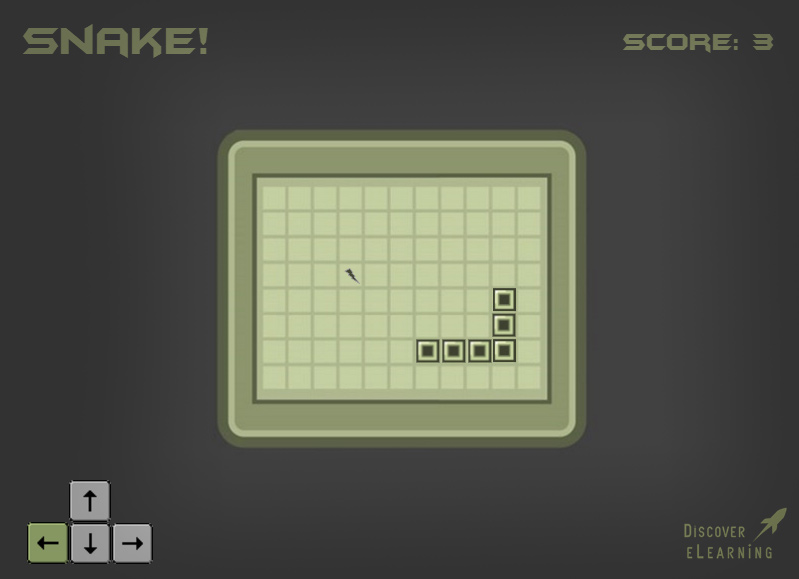 After hearing the news that Nokia were going to be re-releasing the 3310, one of the best phones that I ever owned pre-smartphone era, I thought that I would have a go at recreating the classic LCD game 'Snake' using Articulate Storyline, and here is the result!

Good luck and I hope that you have fun playing!

Only a small piece of JavaScript code was used to produce the game (in order to generate the random position of the food on the game grid), the rest was developed entirely using the built-in features of Articulate Storyline, such as relative motion paths and the new collision trigger which came in very handy!

Super cool Chris! Thanks for sharing :)

This is really great, I have scored 26, is there a maximum score? if there isn't how do you keep generating the snake bits?

Hi Phil, thank you very much!

There is no maximum score but the snake does stop growing at around the 30 mark as this was where I decided to stop. I found it becomes challenging enough at this point even without the snake growing any more!

The squares are generated every time the score changes/increases by each one changing state from Hidden to Normal depending on the score number, if that makes sense.

I planned to get to 30 and check but after about 20 attempts realised 26 was the best I could get.

Really nicely done, love the retro feel, would love it to restart quicker (but also get why it does what it does).

Thanks for sharing, I spent my first 10 games trying to work out how you did it, you have given me some great ideas for building stuff, thanks

Chris, thanks so much for sharing this excellent game example! I've added it to the examples hub here.

This is amazing, is there any way to recreate this in Storyline 2 as my company are not looking to upgrade at this moment in time.

But I still want to develop my skills.