"State is equal to" triggers working in reverse

I have two objects that I want viewed in a particular order. When user clicks picture 4, its state should change to hidden allowing picture 5 to then be viewed. Picture 5 should not be clickable until picture 4 is hidden. The problem is that this is working in reverse. Picture 5 is clickable until picture 4 is hidden. I want the opposite. Triggers are attached. It is early here so... Does anyone see my mistake? I know there are multiple ways of accomplishing this but now it's just annoying that I can't solve this. Thanks. 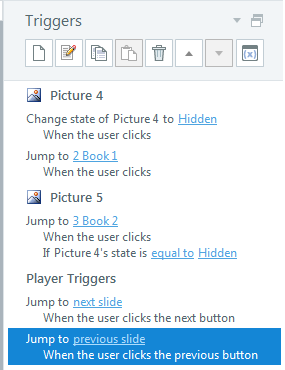 Have a look at the attached file and see if that works for you. The second item starts off in a disabled state and its state is changed to Normal when the first items is clicked. Hope that helps.

Thanks. That is a better way to do it. Still confused as to why the above isn't working. I imported the file into a new SL2 and had the same results. I guess I just can't do it that way.

In the triggers above, it does not look like you have a trigger to change the state of Picture 5 to "normal" How do you have the initial state set? Michaels idea would be a good way to set this up.

I am using Michael's method. But to answer your question, Picture 5 is already Normal. I just don't want the trigger on Pic 5 to work unless Picture 4 is in the desired state. I never did get it to work the proper way unless I reversed the trigger to say "..is NOT equal to Hidden". Then it worked...in reverse. Very odd.

...Sorry. I see now also in my original post that I failed to mention BOTH pictures are (and should be) visible at all times. Both have triggers set but pic 5's link should not work unless pic 4 was already hidden.

Do you want to share a copy of this .story file for us to take a look at? Even just that one slide would be helpful.

I was able to recreate this in a new file I tested. I will be sharing this with the QA team for review. For now the workaround would be to set the item at a disabled state as initial, and have it change to normal when the first item goes to the "hidden" state.

Thanks! I was beginning to think I was crazy.

No, not crazy, just stumbled onto a bug :)

If there are any updates I will share them here.