Hello, I received an error as per screenshot below when opening a story file in 360: 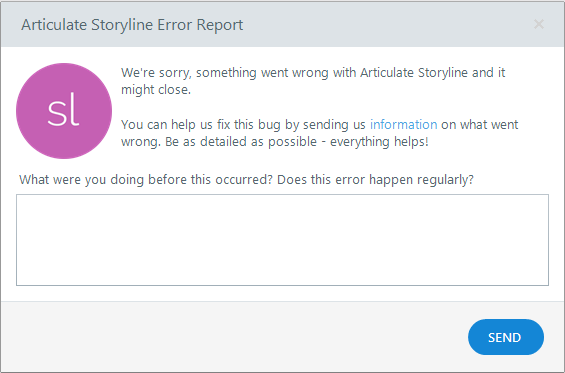 The file was working fine earlier before. Then I received notification from Articulate 360 Desktop App to update Articulate 360 and Storyline 360. After that, I received the error mentioned above when opening the story file earlier.

I can't open any other story file in the same project folder. I can however open other story file from different folder and also create new file. I tried importing the file into a new story file but only managed to import the Quiz scene but not the other scenes that I need.

Tried copying the file into another new folder, still receives the same error. Can someone help me? I've attached the file below.

Thanks for reaching out to our Support team as well and sharing your file with us here.

I see that Vevette is testing your file out and it sounds like from her testing so far it may be an issue with your version of Parallels and Windows 7.

Keep us posted if you're able to install the updates she advised!

Thank you for the follow up. The problem was definitely from Windows 7. I've installed all the windows updates and now my SL360 is working great.

So happy to hear you're back up and running, Mohd! That Windows 7 will get you every time. 😉