I feel like I should know the answer to this question but I’m a little confused.  When using a trigger, what is the difference between “submit results” and “submit interaction”?

Submit interaction would be just for a question/quiz slide, and submit results would be for the overall final results slide submission to your LMS.

My course includes a survey with a results slide at the end and in which the course completion is based. Learners must submit each survey question individually as I have a submit interaction trigger on each page. I was wondering, however, if I still needed to include the submit results trigger on the results slide.

I'm thinking not but a confirmation would be great.

Ohh! Well that explains it! Also, I'd gone ahead and added it back anyway, republished and I'm finally getting my completion! (remember Case #00709693?) :-)

Thanks for all the help Ashley!

Ah - another thread. You threw me off with that Sandi. Glad to hear things are working again!

I finally understood better the difference of Submit results and submit interaction. Thanks!

But I have another question regarding this point. In case of a quiz with a variable (and free) number of questions (the learner can decide how many questions to do), how could I manage the action of submitting result for LMS? Is it somehow possible to call the same results slide more than once?

I'm not sure that I'm following your question? How would you accurately track results if the user picks the questions they want to take? Do you have a sample .story file we can take a look at?

thank you for your quick response. This is my big problem: tracking result. The course is designed like a game and the learner can decide to answer a variable number of question. It is not really important to track passed/incomplete, but rather the percentage/points reached. The idea is to record the result reached everytime the enter the game. I forgot to say that the course shoul be uploaded to an LMS (scorm 1.2) and I am using SL1.

Anyway I attach the sample. I thank you in advance for any advices you will give me. :-)

Leslie I add another last thing... would it be possibile to pass the result with JavaScript like described in this post https://community.articulate.com/discussions/articulate-storyline/can-you-pass-sl-results-variables-on-to-javascript. I never wrote a JavaScript but perhaps you or other can help me..

If you're looking to go the Javascript route, we'll have to defer to the community as it's not something that staff can assist with here.

Thank you Ashley for your feedback. You are right it is difficult, because the idea is that all questions should be tracked, but the learner can decide how many of them to do. In the best case he will do all questions reaching 100% of result (if all are correct) otherwise he will get less, but this does not mean he will not pass. We just want to track the percentage of each learner, updating it everytime he does the course again.

Could you give me some advises on how to get in touch with somebody that can assist me using Javascript within Articulate? I never use Javascript in my life :(

You're there Silvia :) Hopefully the members of the community will be able to chime in and assist. If you'd like to start a new thread, specific to what you are looking for so that the right users will see the request, you are welcome to do so.

Thanks Leslie I have now a BIG problem because I have to solve it... :(

Do you want to track % correct out of total answered?

I can probably give you some javascript for that.

Thanks Snorre, this discussion is a bit older so I don't know if Silvia is still subscribed here. You are welcome to reach out by using the "contact me" button on her profile to message her directly.

Snorre do you have that javascript for me? I need it as well as I have run in to the same problem

In case Snorre is not subscribed here you can use the "Contact me" button on his profile to reach out.

Good luck with your project!

I mostly know the difference, but do you need both?  I'm working on a Survey, but I want to control which slides they are going to, based on their answers from the current slide, but also register and send their answers to our LMS.  I don't seem to be able to control the movement and also have the Submit Interaction trigger.  It seems like the Submit interaction trigger automatically jumps them to the next slide upon hitting the submit button, but I want to  send them to "Slide A" if they pick one answer and "Slide B" if they pick another answer.  I can delete the submit interaction trigger and control their movement through the survey using other triggers, but will their answers actually get sent to our LMS if I only have the Result Slide?  If not, how I can do both?  I've tried a bunch of stuff and nothing seems to work?

Additional Info regarding attached file:  This is True/False or Yes/No survey.  True/Yes are the answer the client is looking for, but if someone answers False or No, they want the learner to provide an explanation.  They want to see this explanation too.   For some reason our LMS doesn't play well with the "Text Entry" option so I really need to use a separate "Short Answer" slide to capture that explanation.

I'm attaching the SL file in case my explanation above doesn't make sense.  Note: it's sort of test file so it's not fully set-up, but scene two is the one I've been playing around with.  Also, you'll see a "Change Answer" layer, which I may just get rid of because of the same issue.  I'm not sure how to get the system to recognize they've changed their answer if they've already hit the Submit button and then of course control where they go from there as well.  Survey's don't have the multiple attempt option that automatically sets up a "Try Again" layer so I was trying to re-create that functionality.

I have tried building using Quiz Questions, but there isn't "Short Answer" or "Essay" option and again, the "Freeform style with a text entry box" doesn't work well in our LMS.   (See the attachment MLS Report for MRL  PNG)- it shows how the "text entry" answers appear in our LMS reporting- they are just jumbled up in the bottom within a bunch coding and its impossible to figure out which question the answer belong to.

Thank you for taking a look and providing any possible guidance!

Actually, I think I just figured it out.  I set-up the branching in form view instead of using triggers and got rid of the "Change Answer" layer.  I'm testing the reporting now, but it flows well in SL so I'm hoping that worked.  I was going to just delete my comment, but figured I'd leave it in case anyone does have any additional advice or suggestions.  Thanks!

If I am tracking course completion by a passing score on Quiz #2 (and I have set up the course so that learners cannot advance to Section 2 material unless they pass Quiz #1), is it necessary to have the trigger, Submit Results, on Quiz #1? Or can I delete it? This is based on questions my client has been asking, they do not want the course to communicate with the LMS until the final quiz).  I tested the issue by deleting Submit Results from Quiz #1, and the scores are still calculated based on the Success and Failure triggers.  So the question is: Is there any reason to keep the Submit Results trigger on a quiz that is not being used to determine Pass/Fail (which is determined by how we are tracking Pass/Fail).

Sorry for this complicated question, it is mostly out of curiosity to understand the precise function of Submit Results. Thank you!

Excellent question! In your Publish settings, you should be able to select which result slide you'd like to track for reporting to your LMS. 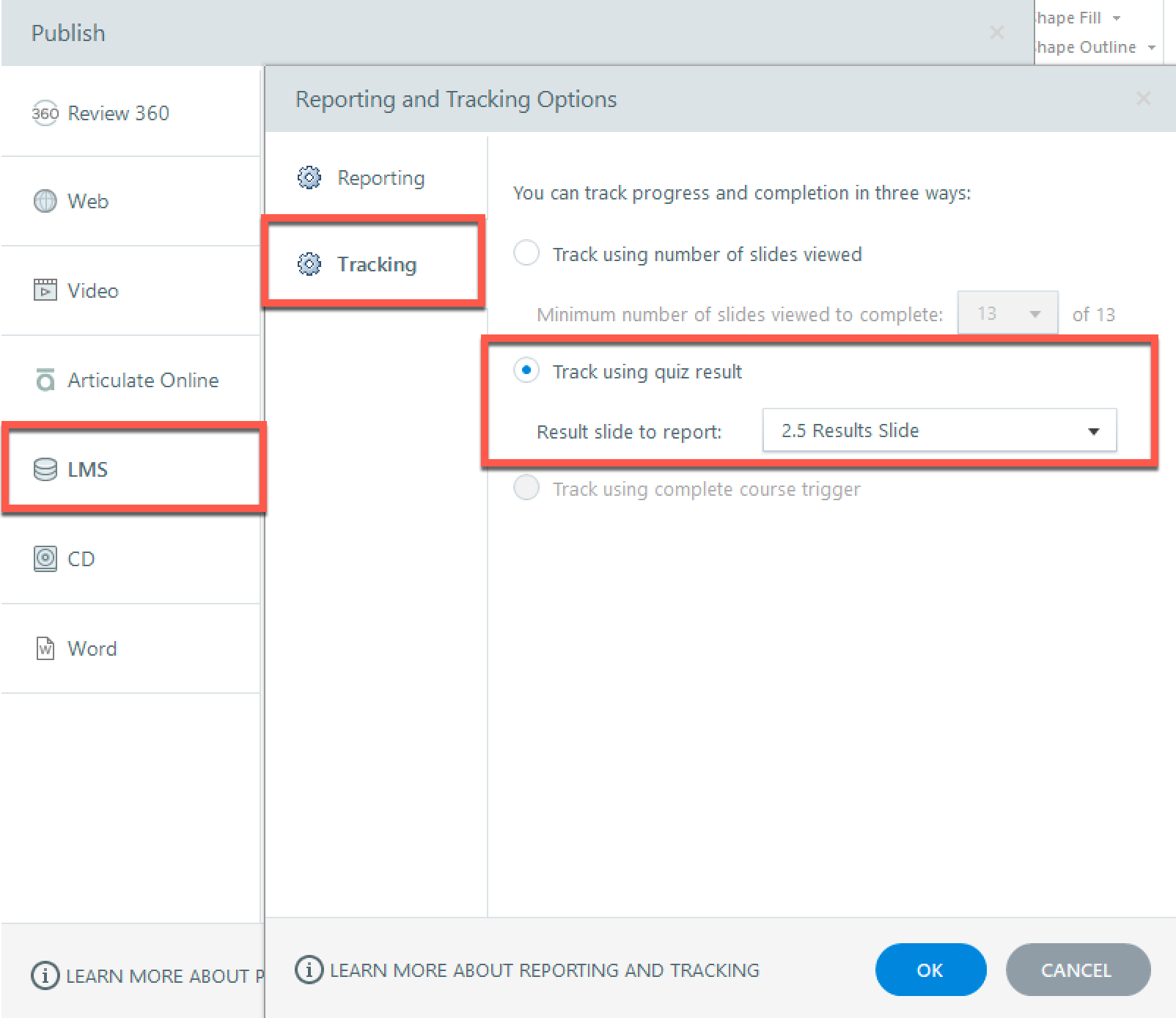 If you selected the Quiz #2 result slide in this window, you shouldn't have to remove the Submit Results trigger from Quiz #1. Though, if you find the scores are still being calculated and you're able to determine whether the learner can move forward or not, then removing that trigger should be ok.

The Submit Results trigger is used to calculate and report scores to the LMS.

Ashley, to be clear if I want essay text to submit to my LMS I need the results slide.

That is correct, David. Are you running into any difficulty that we can help with?