It works with a video imported from a file. But I have to compress a lot my video so it is not too heavy.

So I wonder if I could use a video from a website (embed). I tried to do that but now, I can't find how to synchronize the video with the texts...

In fact, Storyline requieres the user to click on Play to launch the video.

So I don't know how to launch the texts. I tried with a trigger : "show the layer containing the texts when the user clicks on..." but there is not "clicks on the video" ! 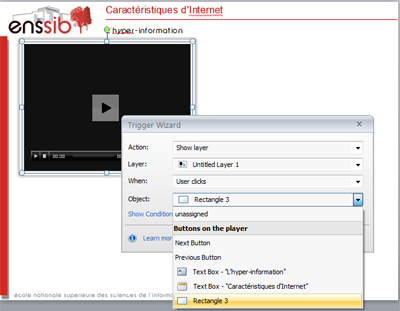 Thank you for advance for your help!

What method are you using to add the video to your slide? If you insert using Insert > Video > Video from Website you can use the "Options" menu to adjust how this video is played. If you select "From Trigger" to play the video, you can trigger the video using an "on click" trigger. Then, simply add another trigger to show the layer that contains the text you'd like to display.

If you're still unable to get this working, you're welcome to share your .STORY file here. I'd be happy to take a look and see if I can get this to work for you.

Thank you for your answer Christine!

Well, I tried to follow your instructions but without success :-(

Now, the video doesn't want to launch and remains white...

I join you my .story if you might take a look at it?

Maybe an other solution is to change, in the embed code, the parameter autostart=0 into autostart=1?

Whatever, a big thank you for your help!!

Thanks for the file

I took a look and I spotted a few things that may be causing some issues.

First, the layer with the text was hidden. I changed this, so it will actually be visible when called.

Second thing I noticed was that the object you were using to show the layer was actually behind the video on the slide. So, if you were trying to click on that rectangle, it wouldn't actually receive the "click" in order to display the layer. I also added a trigger to that object to play the video.

However, I'm running into an issue getting the video to display as well. I tried to view the video and site in the embed code, but I'm not able to access either one. Can you try viewing the video using the original URL and tell me if the page/video loads for you?

I know it's not all fixed yet, but I'm going to attach the modified version of your file. If you click on the video at this point, the text will show up now when they're called on the timeline.

I'm so sorry for the delay but I didn't know you answered me.

However, thank you for your help!

Now, the text displays correctly but I still have a problem to launch the video. I think you're all right: there's something wrong with my video server.

I'm going to investigate in this direction.

Thank you again for your support!

No problem at all, we're all having a little trouble with notifications right now. We had to make some changes to the thread subscriptions, due to some spam attacks on the forums. For now, if you respond to a thread, be sure to click on that link at the very top to resubscribe to the thread.

You're very welcome! Please let me know if you find anything after investigating the video. I'd be curious to see what's going on with it, too.

Thanks very much Claire :)