I'm unsure if the two issues are related but they always appear together.

2) using multiple zooms across slide to create transitions the initial zoom disappears from the timeline (but is still there as the second zoom is still named "Zoom 2") occurs when there are 2 zooms on a slide which encounters issue #1.

I've had these issues happen many times in the past and so far there is no way to correct them. Once a slide is affected by this "curruption" the only way to fix it is to delete the affected slide and recreate it.

Issue appears on slide 2.4 of attached story file. I didn't want to par down any of the file to avoid changing any conditions.

Thanks for sharing your file here!

For Issue #1, it seems like the timeline is stuck at ~13 seconds, which is the length of the "invisible" zoom region. I deleted Zoom 2 and noticed that an empty place still remained on the timeline for a Zoom region. Select that empty place, and delete it. Now you should be able to adjust the duration of the timeline.

For Issue #2, you'll want to be sure you place 2 zoom regions side-by-side in the timeline, like they are shown in the image below. After placing Zoom 1, click Insert Zoom Region to add Zoom 2. You'll notice that the duration of Zoom 1 shortens to .5 seconds - click and drag to adjust the duration to the desired length. 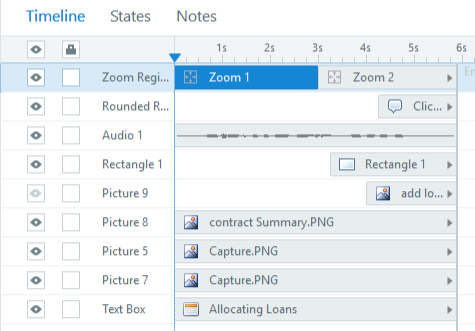 I have made this change in the attached file. Take a look, and let me know if it works for you!

That is pretty much how i had it set up before the issue appeared. When i pasted the popup which lengthend the timeline it caused the "zoom 1" to dissapear. I'm assuming that the timeline resizing resized the zoom as well and since there was already zoom2 there they would have overlapped so it made zoom 1 turn invisible??? this is still an issue as I used duplicating the slides to get the zooms to line up to give smooth transitions between the slides if the only way to fix the issue is to delete the zooms I'm going to spend more time trying to get the zooms to line up than just recreating the whole slide since there is nowhere to just put in numerical position/size for the zoom region.

I can't say for certain what caused Zoom 1 to disappear, as I've never seen that happen before. I tried to move things around in your file to see if I could make Zoom 1 disappear, but nothing I did removed the zoom from the timeline. If you would like to work with a Support Engineer one-on-one to investigate this further, you're always welcome to contact them directly using this form.

In regards to your frustrations with not being able to input numerical position/size for the zoom region, I hear you. It's an idea that would make working with zoom regions easier, and I know many users in this community would like to see that feature added to Storyline.  Can you please share your perspective with our product development team in the form of a Feature Request?

I can easily recreate the issue. Taking screenshots ill post in a moment.

Slide A: 2 zooms touching to create a transition. Zoom 2 is set to ‘show until end’ 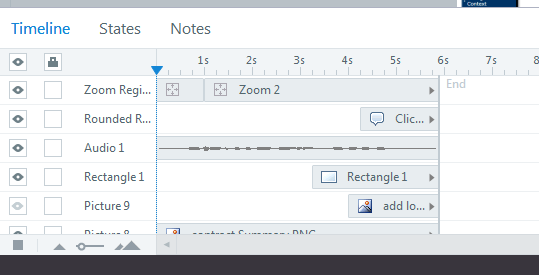 Slide B: Copy an object from another slide that begins later in the time line (copied circled object)

Slide A: pasted object (note it extended the timeline and put the object where it was in slide B)

Slide A: Moved pasted object on timeline to earlier point.

Slide A: attempt to resize timeline and see Zoom 1 disappear and timeline get stuck.

100% recreation everytime. I even attempted on another machine with the same results.

Thanks Ryan for the steps - I'm going to take a look at this and see if I can get the same thing to occur.

I did want to mention that the object extending the timeline does look to be working correctly based on the initial timeline of that element, so that it's going to match that when you copy/paste it onto another slide.

I recorded a quick Peek of the behavior I'm seeing and I'm not able to replicate how the slide zoom disappears.  As I mentioned in the video, I'm on Windows 10 using Storyline 2 Update 11, which is the latest update. If you're on another update I'd first recommend going through the download and update of Storyline and then trying to recreate the behavior on a brand new file. If it doesn't happen on that new file, it would indicate something occurred on the original file on your system and you could look at importing it into a new project as described here to try and resolve some of the odd behavior.

Let us know how things are going after taking a look at those recommendations!

You missed the last 2 steps. I didn't rescale the timeline I moved the pasted object to start earlier in the timeline then tried to drag the end of the timeline back to where it had originally been. I'll post a recording momentarily.

Shoot - I did do that on the first one before I recorded...same thing. Sorry I got distracted while doing my recording...but any additional information you can provide and go through those steps would be helpful!

Here is a recording of the issue.

Thanks Ryan for sharing that - I was moving the object and then dragging the timeline, and inadvertently had set the zoom object to not show until end - so that's why I wasn't seeing it! For what it's worth, it seems to happen even before dropping the new object in, but it makes sense that's when you'd run into it. In the meantime, it looks like changing them to not show until end will allow you to redo the overall timing element and then you could reenable that setting.

I'll get it reported to our QA team to investigate further and will keep you posted here!