I am having a difficult time getting bullets on screen to animate correctly. I have them flying in from the bottom and they are timed with audio. However, even though I have each line on cue with audio, the first line of a separate bullet keeps coming in on screen with the second bullet. This happens even though that line is not set to come on screen until later. I have manually timed the animations and it still didn't work and then i deleted the entire text box and re-typed it in and then reanimated and and re-timed and it still does it.

Is this a limation of Storyline? That bullets just cannot be timed that way?

Hi Michelle, the timing should work.  I've attached a simple story file to show it to you in action.

I know that if you make them seperate text boxes, they will animate that way, however, if I have a single text box and want to animate each bullet in the text box on cue of the audio, it doesn't work in my files. I am finding that Storyline has more bugs then I predicted.

You are right - the timing does not work  when you use a single text box. The text is displaying based on the animation animation speed and ignoring the placement in the timeline.

So I guess the only way around this at this point is to put each bullet in a separate text box.

I'm curious.. You say "they are timed with audio" and "I have each line on cue with audio".  In what way did  you accomplish this?

As far as I am aware, there is no way to set up the timing for individual bullet points within the same textbox.  As Nancy said, the best you can do is set the speed of the animation.  This is not a bug, it is simply limited functionality.  It works as intended.

I'm hoping they do allow for more timing options in the future such as are allowed within Presenter, but for now separating the bullets into individual text boxes is the way to accomplish this.

Hi Josh - this is what Michelle means -

When you have more than one paragraph in a text box and set the animation to fly in by first level paragraph Storyline places each of the paragraphs on the timeline as shown in this example. 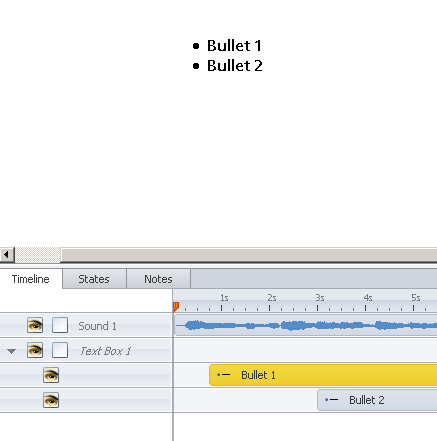 I'm a bit late to this party but I am having a related issue and cannot find any forums about it.

Is this a technical issue or am I doing something wrong?

If there is already a forum about this, please forgive me.

Hi Josh, I have not encountered this myself and don't recall anyone else mentioning it in the forum.

Do you find this all the time or is it when you use a particular animation effect?

I'm not seeing it happen with a particular effect. It even happens if there was never an animation assigned to it. It's almost as if toggling the animation effect refreshes the timing and sync's it to match my adjustments. I'll create a new post to see if anyone else has caught this. Have you found any workarounds? The good news is that we know a temporary solution. The bad news is that it takes 5 extra clicks each time you adjust the timing!

I'm having a similar problem with timing multiple bullets in a single text box.  As you can see from the screen capture below, I have a text box containing 2 bullets: Approaches to... and Indicators of performance.  I have the animation set to fade in by first level paragraph.  However, I'm only seeing the first bullet (Approaches to...) on the timeline.  The second bullet (Indicators of performance) does not appear.  I'd like to be able to time my bullets to the audio without having to pull them out into separate text boxes.  What step am I missing? 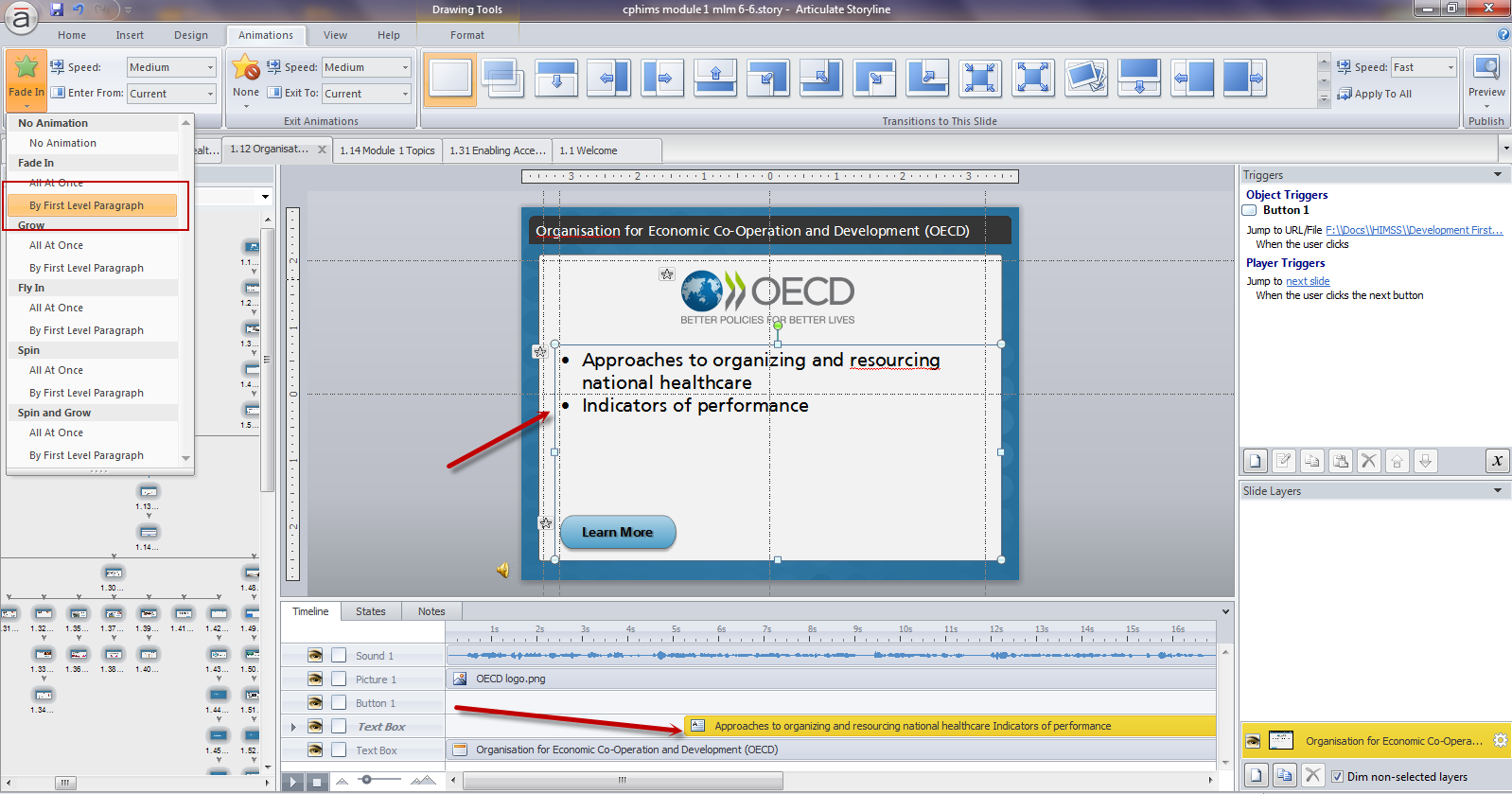 Did you expand the text box to see the individual bullet points? 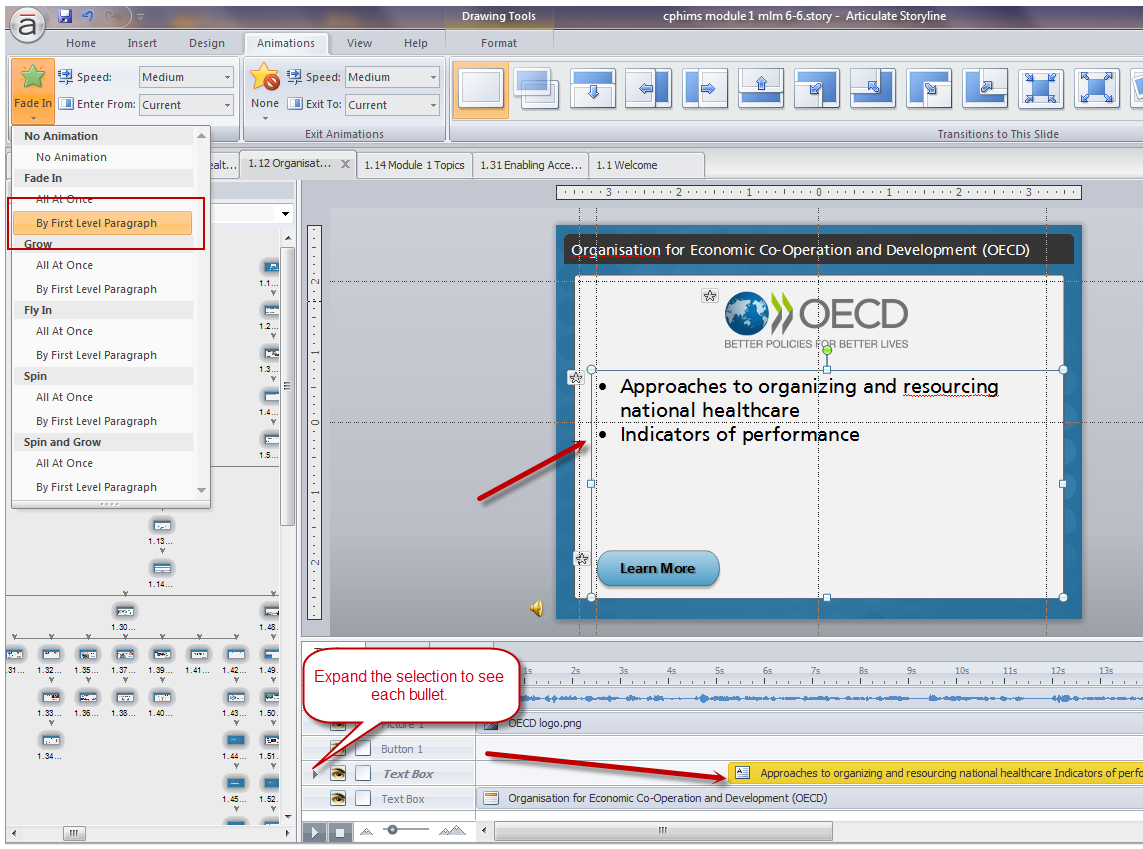 That's a helpful trick.  I didn't see that documented anywhere and didn't recognize it as an option.  Thank you.