The way I imagine achieving this is - have a clickable, transperant object who's state changes "Hidden/Visible/Hidden" as the objects I want to be clickable come on screen / leave screen.

The problem is - if I want the course to pause after each click, or if the user clicks and pauses the video - the slide timer continues forward.

So how can I link the object Hidden/Normal state change triggers, to a time in the video itself?

What happened when you tried your ideas?

Can't find a way to try them.  It seems those features haven't been implemented yet.

There is one way you can achieve the functionality,  instead of changing the states you can keep the objects in layers and keep the layer setting to pause the base timeline and call this layer when you want to pause the course that is as you explained above on click right, i hope this may solve your problem

Hi, Simon -- Looks like Prashant has some ideas you can try!

Please let us know if that does the trick for you, and if you would like community members to offer additional design suggestions, you may want to post your question and .story file over in the Building Better Courses forum, as well. Best of luck with your project. :)

I must agree with Simon here, having the option to add a trigger "When Media reaches X time" would be a fantastic feature! I am struggling with finding ways to keep my questions in sync with my media, because the questions are cued on the slide timeline, and not on the media timeline. This effectively means that if a learner scrubs forward or backward on the media, or even if they have to pause it for some reason, the questions pop up at the incorrect times, because they are linked to the slide timeline and I cannot link them to the media timeline.

My media is on the base slide, while the questions are set up as layers that are triggered by cue points. If cue points could be added to the actual media, or if a trigger could be linked to a specific time on the media, that would streamline the process tremendously!

Is this something we could hope to see in a future release?

This is an incredibly frustrating 'feature', the disconnect between the slide timeline and the video timeline. I recently had to recreate a PowerPoint slide where things were triggered at certain points in the video, and the only way I was able to do that was to replace the video controls with my own (thus not allowing the user to scrub), and have the buttons pause and resume both the video and the timeline simultaneously. This keeps both timelines in sync, but does mean the users can't scrub, rewind or fast forward.

EDIT: sample attached. Please excuse the ugly, I removed all the branding. The first trigger is at about 28 seconds so it's a pain to preview but you can see all the behaviours and cue points.

Even if the video plays later, like in slide 3, the timeline of the slide and the video are in synch. Scrub and pause, and the layers come on at the same point in the two videos. The point is that this is a problem only when the start point of the video is under user control, and not program control. The only real problem is that each layer has to run its timeline before it disappears, and that is solved in Scene two.

The user starts the video (Preview Scene 2) at their leisure, which puts the timeline at a random point. That is overcome by having that click start a new slide, rather than start the video, and now the video's timeline is back under program control. The jump is seamless from the viewpoint of the user, and I think involves less work than creating custom play buttons.

I solve the problem of the layers not disappearing when the timeline is scrubbed by putting the layer objects on the main slide, where they are under timeline control.

I think the behaviors of the first two cue points are the same, and seems to save a lot of time and frustration.

Note: I did put a still frame from the video under the video on slide 4 to hide the blue rectangle because the video has a fade in.

I only implemented all that time and frustration because when the video starts automatically as the slide starts, if you pause it, the slide timeline continues and the cue points are triggered regardless. Example attached :) (slide 2). Pause the video after the slide loads and you'll see what I mean, I hope.

I see your player has a seekbar on the second and third slides and wonder if this has something to do with the discrepancy - also curious as to how on earth you got that there, when the player controls clearly have seekbar unchecked!

Oh wait - I think that IS the difference, because on none of your examples have you reinstated the player controls on the video. You're relying on the player seekbar (which explains how it controls both timelines) - that's interesting, wouldn't have thought of that. I'm not convinced I'd get away with that considering the layout requirements of this course but it's something I'll bear in mind in future - but I'm still REALLY curious as to how you got the seekbar on there?!

Each slide gives you the option to override the global settings. 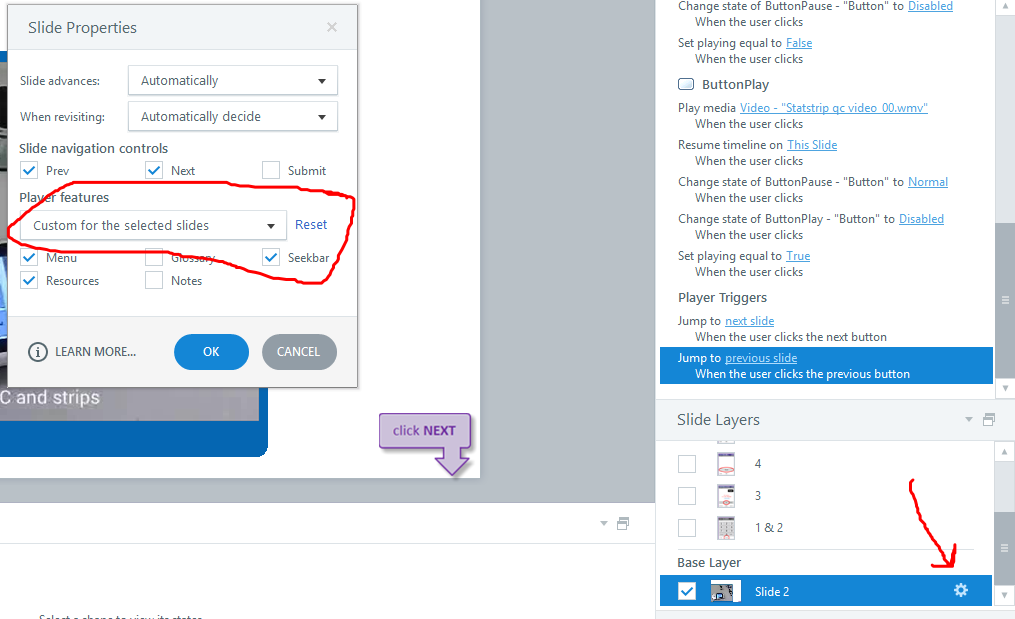 Ah - hadn't spotted that, the options are only visible once 'custom' is selected. Many thanks :)