Today I was giving a demo on creating a simple badging system in Storyline and it didn't work as expected. I put my demo together yesterday and everything worked fine then. In the class, some people found that it worked and for others it didn't.

I created two quiz questions. I have a variable set up to store a number with an initial value of zero. On the Correct layer for each quiz question, a trigger adds 1 to the variable. I know this is working because I set up a reference calling the variable and it gave me a result of 2 after I answered both questions correctly.

On my master slide, I have a badge icon with an initial state of hidden. Here's where I kept running into a problem: I was trying to create a trigger to change the state of the badge icon but when I clicked OK nothing was saved in the Triggers menu. This was strange as it worked fine for me the previous day. I'm suspicious that it's some kind of bug as I was able to do it eventually after testing other types of triggers.

It would be great to clear this up so I can report back to the demo participants. Thanks in advance.

Hi there, Arend. It sounds like you aren't able to create triggers on your slide master. Is that right? Can you tell me what version of Storyline you're using?

I did a quick test in Storyline 360, and I was able to save a trigger to change the state of an icon to normal when the timeline start on a variable condition.  To note: your slide master triggers won't show on the trigger panel in your project slides.

If you can attach your project file, or even a quick mockup, I'm happy to test it out!

Looks like this was still in Storyline 2. I'm downloading 360 now (sorry, I'm not in SL much these days).

It seems to be a sporadic thing, as I was able to do it before I did the demo, and eventually got it working. I'll have to find out if the participants who had the same problem were in SL2 or 360.

Thanks for confirming! Could you share a sample file here so we can take a closer look?

If you'd rather not share it publicly because it contains proprietary information, you can create a copy of the course. Then, delete all but one or two slides, and replace or remove slide text. All we really need to see is your slide master set-up and base layer triggers. 🙂

Here's a copy of the example. The variable is called connectedBadge and there are triggers on each of the Correct layers for the two questions. All that needs to be done is add the trigger to the Master slide to change the state of the badge icon when connectedBadge reaches 2 (this is where the problem occurs).

As I said, the problem seems to occur intermittently so you may not be able to reproduce it.

Adding this trigger will do the trick! 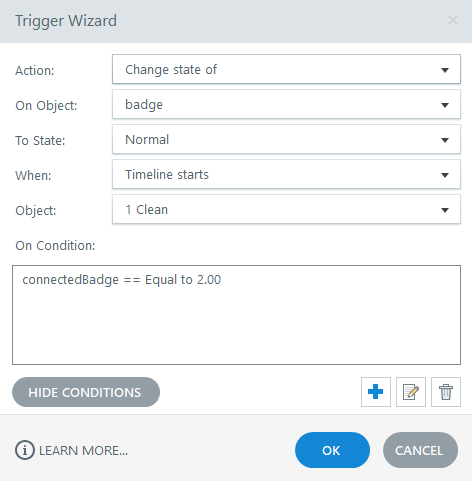 Have a look at the updated sample I attached, and let me know if it's working for you. 🙂

That's exactly what I did. As I explained, this only works intermittently. Sometimes I create the trigger using the wizard and when I click OK it doesn't save it. That's why I was asking if this is a bug.

Thanks, Arend. To double check, are you working on this file from your local hard drive? Also, are you on the latest update of Storyline 360? To verify, click the Help tab, then click About Storyline. You should see 3.9.13567.0 in the bottom-right corner.

I have tried adding the trigger multiple times, but I haven't seen an issue where the trigger doesn't save. If it happens to you again, could you record a Peek of the behavior and send it to us? That would be really helpful!

I'm suddenly unable to repeat the problem, so I'll keep an eye out for it again and will record when I see it.