Since accessing objects state is not possible from javascript I decided to do boolean variables reflecting the down state of a number of pictures (the internal hover and down states added manually to a picture object).

After a while I found a solution to this but it doesn't work as I expected it to do in all cases. 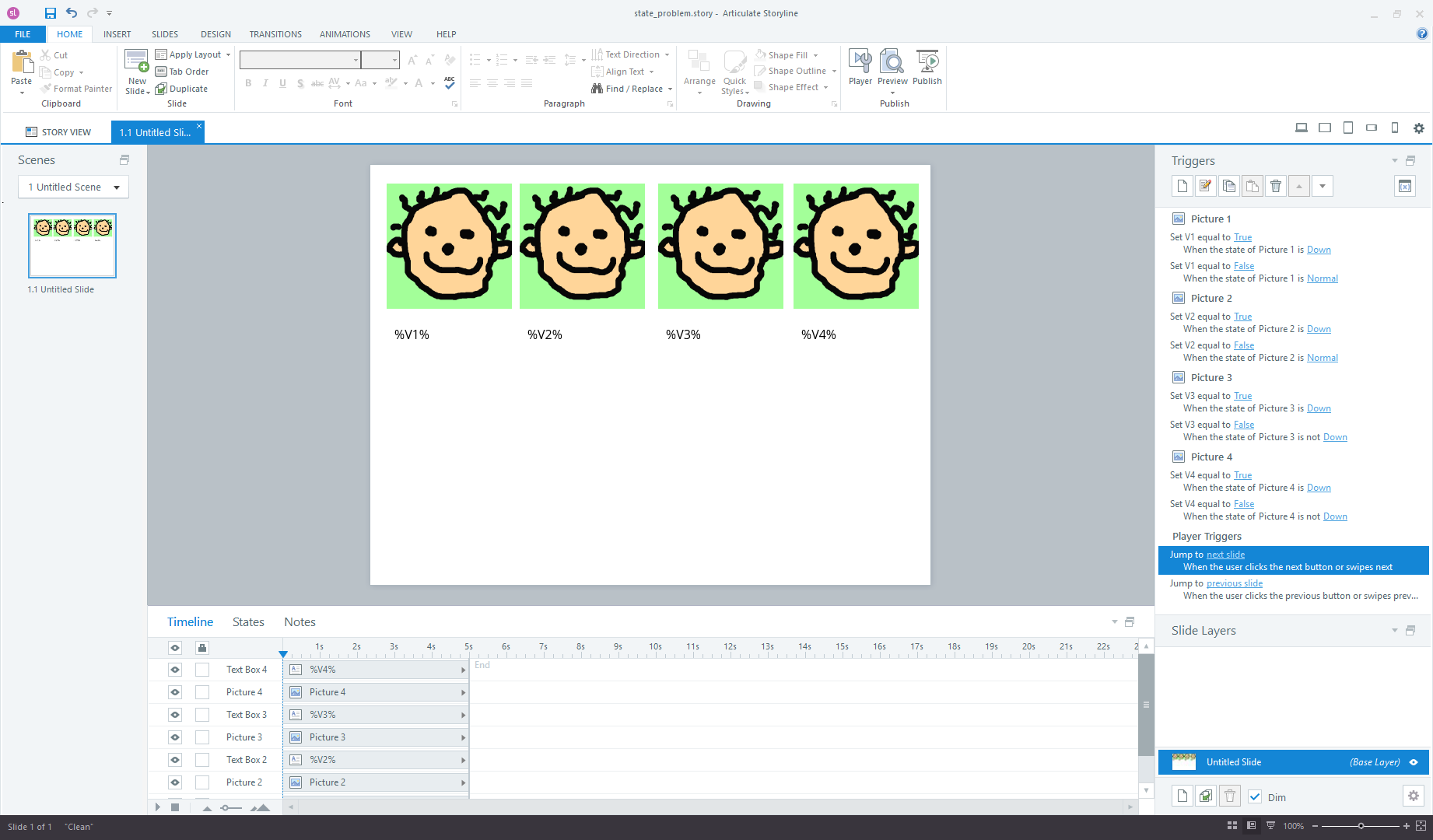 As you see in the screenshot I have four picture objects, what you don't see is that they have a hover and down state. You see the triggers I have inserted on each picture to set and clear the boolean variables displayed below each picture.

Picture 1 and 2 would probably not work as intended anyway since they check for state normal for clearing the variable and I have a hover state, but even that doesn't really seem to work as should be expected since leaving the picture doesn't clear it either.

Picture 4 works as expected, but not picture 3. The triggers are displayed the same in the trigger panel but are set up differently and I can't understand why nr 3 doesn't work as well as nr 4.

Just commenting so it is known that this has been an ongoing issue impacting multiple users... I have been unable to get triggers that check the states of multiple items to ever work. Clearly the intent was to have that function, but no matter what I or my team members have tried, it just won't trigger.

Perhaps this issue will be addressed thanks to your documentation of it.

We have also been having this problem where it will not allow us to continue. Is there any update on this or whether this will be fixed in any update?

Hello Lead, and thanks for following up!

I'm sorry to hear you're facing a similar issue. Happy to work with you on this!

Could you share more details of your current setup so we can understand better? If you're able to share your file here or do a quick Peek 360 screencast of the issue for us, that'd be great! Or, if you prefer, you can connect privately to one of our support engineers, and they can help determine a cause.

I just wanted to share that we are no longer seeing the bug reported where the trigger using "when the state of none" is not working using the latest build of Storyline (3.61.27106.0).

If you're using the latest version and you're still experiencing this issue, please reach out to our support team through a case.

I am sorry to let you know that the projectfile I attached before still does not work as expected.

I see that you've attached a few files to this thread. If you're still experiencing this issue related to "When the state of none" trigger, please share the affected file with our Support Engineers in a support case.

They'll take a look to determine next steps.

Got this answer from support

Thanks for contacting Articulate Support!

I am sorry that you're seeing the trigger element "when the state of none of" not producing the expected behavior. I'd be glad to help!

Thanks so much for letting us know about this issue. I’ve logged it as a possible software bug.

From here, I’ll meet with my team to take a closer look so we can determine next steps. Sometimes my team catches errors in my logic and we don’t have a bug after all. Of course, if that’s the case, I’ll let you know!

Depending on priority and risk, some bugs can be fixed quickly, while others take longer to resolve. Here's more information on how we identify and tackle bugs: https://articulate.com/support/article/How-We-Tackle-Bugs

I’ll let you know as soon as we have an update on this issue. Thanks so much again for letting us know about this, and I’m sorry if it’s slowing you down.