variable "use count" - not adding up

I made a game (like chutes and ladders) that users will play within an eLearning. Unfortunately I just checked my use count and saw something concerning. I have 9 people/avatars that a learner can select as their game piece at the beginning of the game. Throughout each slide (game square), the game piece switches to that face for their game piece. Theoretically, each of the 9 variables for the 9 avatars should have the same use count. Correct? Well.. they don't. And I can't think of an easier way to check where I made a mistake other than going through each and every of the 50+ slides. Ahh!

I think the Alanda variable is drastically less because each of the avatar objects are labeled "avatar.alanda" (initially I was going to have each avatar a separate object on the timeline and variables hiding the 8 avatars that weren't selected but then I realized doing states would have been much easier so I went that direction but I never went and relabeled my one remaining object on the timeline to a more generic title like "avatar" and just kept them all "avatar.alanda". It's got to be something along that reasoning... except to test this theory I went and renamed a few of the objects "avatar" (dropping the .alanda) and my use count remained exactly the same. Thoughts? How do I make sure the avatar alanda is accounted for on every one of the slides?

Because it's so close to the other variable use counts, I'm assuming this was just a user error and on two of my game slides there's no variable for Lou. How do I find the two slides without going over each and every slide's variables?

The problem with Alanda is not the name of the objects. 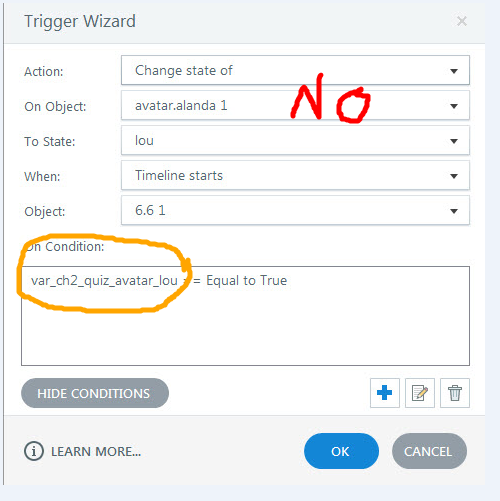 It is the usage of the variable (like in the condition on this trigger) that is being counted.

It will still be a daunting task, but if you click on the number behind the variable, you will get a list of every place it is used.

What I don't understand is each one of the 60-some slides has the same 9 variables .. change state avatar to name 1 when timeline of the slide starts if variable name1 is equal to true type of thing. In theory, each avatar's variable should only be used 60ish times. I can't figure out why they're as high as 120.

Regardless I did actually start to compare the use count pop up boxes but I copied/pasted two into two diff word docs so I could compare side-by-side a 120-count with the 118- or 56-counts and they were 21 pages long. At that point it would be eaiser to go slide by slide.

But I really don't understand why they're in the 120s now that I think about it more. 56 ish seems to be much more accurate! AHH!

(I'm happy to paste the file if someone would be willing to take a look...)

Story file for anyone willing to help!

Walt, you've done so much work already and I can't thank you enough!! I'm struggling interpreting the data, though.. I'm so sorry to ask this but is there any way you could tell me specifically where I went wrong?

At the bottom. I highlighted some of the slide names, so you can see the pattern. I'm not sure about the slide naming convention and where everything goes, but I think you are. It appears you have established a convention and have been consistent in its use, so that will make it easier for you.

I put in the blanks where there slide with Karen's triggers, but none for Lou.