I know Visited vs Selected states has been discussed before, but in researching an issue I was having, I made an observation that doesn't seem to have been brought up before and I thought it might be helpful to somebody.

I've had the same issue with visited and selected button states. I hope they take your solution into consideration with the next update. Thanks for the insight Chris.

Thanks Matthew, I don't think I ever submitted this as a Feature request though, kinda forgot about it. We both should probably do that.

You can both feel free to share your thoughts here in regards to a feature request, and as a reminder here is the information on how states are defined and shown - and there isn't an option to show more than one state at a time.

Thanks Ashley.  While showing more than one state isn't an option, Storyline actually does show both the Visible and Selected states simultaneously by default. You can see it in the image below. The third button has been visited, indicated by the green light. The second button has also been visited AND is the currently selected button, and Storyline rightly shows both the Visited state (green light) and the Selected state (blue light). 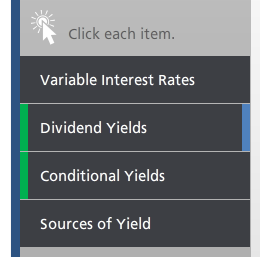 If I move the "lights" (just colored rectangles) so that they partially overlap, you would see that the green rectangle (Visited) would be showing on top of the blue rectangle (Selected). That happens no matter which stack order I put them in when authoring - Storyline always shows the Visited state on top of the Selected state. In a perfect world, Storyline would show the Selected state on top, as that should visually take precedence over the Visited state. Then I could position the two rectangles on top of each other instead of separating them out as I have done as a workaround.

Thanks for that detailed explanation - definitely a feature request is the way to go here if you haven't done so already. What takes precedence in the mind of those who code this all is well above my understanding, so I'll leave it those who know best. :-)

Thanks Ashley.  It's really just a nice-to-have. Not a mission-critical function. :-)

Sometimes those are the easy features to work in though, so definitely a feature request will help ensure the right people are aware of it. :-)

Cool. Will do. Thanks Ashley.

Any update on this? Is it still like this in SL3?

Thanks for following up! Like previous versions, Storyline 3 shows the Visited state on top of the Selected state. You can read more about the built-in states in SL3 here.

Let me know if you have any other questions!

Hi there, and thanks for chiming in!

Storyline will show the Visited state on top of the Selected state by default. Does that sound similar to what you're seeing in your project?

I uploaded a video of both states. However, i would like to hare reasons a person would use a selected state vs a visited state.

Did you mean to attach a video to this discussion thread? If so, could you click here to open the thread, then use the gray Add Attachment button?

I would use a selected state wherever  I wanted to show the suer where they are for example in a tabbed interaction the selected button could be a different colour to show the active tab.

In the same setup I would likely use a visited state on every tab so I know when all of the tabs have been selected.

I am distinguishing Visited vs. Selected for the reason Phil mentioned. I am working in SL 360 and I have updated. I have 2 different problems with the states depending on whether the states have been created with a different shape color or with a different picture. On the slides with pictures my Selected  state does not show at all - only the Visited state shows. On the slide with different shape colors, the Selected state shows once I click on the shape but it stays like that after I click on another shape. It never automatically changes to Visited. I can think of a workaround creating a visual looking like a selected button on a relevant layer but it is a workaround a feature that is advertised as working.  Seems to be a bug.

Can you share the .story file so we can see what you are wanting to accomplish? Or maybe some screen captures?

Part of the issue you are having may be related to how Storyline shows visited states and Selected states simultaneously, and part of the problem might be how you have set up your shapes as sets (or not). If you can upload the SL file or some images, we could see how you are setting everything up and can offer some targeted suggestions.

Chris, could you explain please how to set up the shapes as sets please. I saw this posting earlier but have not seen the option to do so when right clicking. If that does not work I will share some screenshot. Thank you!

Hi Tamara. When you right click an object, you should see the option for Button Set.  You can then add the object to an existing button set or create a new button set to add it to (see imaeg below).

Regarding your other issue of pics not showing Selected State; are you sure they have a Selected State? You might have to add that state to the pics.

Chris, I really appreciate you stepping in and trying to solve my issue. I tried setting those sets as you showed but that did not work.  I do have all the 3 states as you see in the file attached. When I click on one it shows me the light yellow (Visited) and  I can see a little bit of my red Selected state showing if pics in the states are not perfectly aligned. So this is exactly what you were describing earlier. Your workaround with extra lines worked in your case by in my case it should show the exact same shape of either one color or another.

The Button Set function worked perfectly on tabs created through different shape colors though. So I am half way there! Thank you, Chris!

...but in my case it should show the exact same shape of either one color or another...

Unfortunately, because of the way Storyline layers Visited state objects on top of Selected state objects, you won't be able to do what you are looking for since you are using separate pictures for each state, at least not using the built-in SL functionality.  You would have to create your own states and use triggers to change states back and forth as desired to show selected vs visited. That could get messy and be a maintenance headache.

Much easier to use separate indicators for your Selected and Visited states that don't overlap (like I did).

Or, instead of using different pictures for each state, have the original pic as Normal state, and then use Storyline's built-in color editor to adjust the color of the pic for the different states.  May or may not get acceptable colors using the built-in color options, but might be worth a try.

I see, thank you very much Chris! It was important to know the limitations of the SL. I will create the elements looking like Selected buttons on the Relevant slide layers that will show on top of the visited ones.

Glad you worked out a solution Tamara!

Came across this discussion today after trying to create a button with both visited and selected states. I agree with Chris -- expected behaviour would be the 'Selected' state being top of the stack order rather than visited.

As an aside, it is possible to have all five of the built-in states shown at one time, but once a button becomes 'visited' that state will always be top of the stack. See the attached file for a little demo I made to clear it up in my own head.