Testing content today for a launch...got a report (and included screenshot) that the volume control was underneath the slide content. This isn't happening on my computer (PC, using Chrome) and there aren't any reports of similar issues here.

I believe this user was on a Mac system, using Safari - but I am waiting back for confirmation.

Any ideas? I don't really even know where to start since it's basically the vanilla Storyline Player (with colors changed). 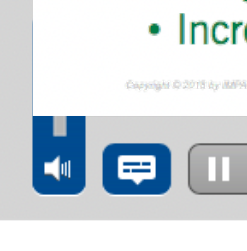 Curious what you were able to find out about your user?

If you would be able to share your .story file I'd be happy to take a look.

The user (one of our testers) was using Safari on a Mac. I'll check with him to see if he's still having the issue (the exported project was overwritten shortly before I found out about the glitch - so it's a new version up on our LMS currently) on the off-chance that it was an error in that one export process. I'll check with the clients to see about sharing the story file.

Hi all, I have the same problem on Chrome. Any suggestion?

This conversation is a bit dated, but we would love to understand what you are experiencing in your course.

What version of Storyline are you using?

With your permission, I'd like to take a look at your project file to investigate what's happening. You can share it publicly here, or send it to me privately by uploading it here. I'll delete it when I'm done troubleshooting.

Customer brought this up as well recently. It's happening to our courses in Chrome on Windows 10. Using Storyline 360.

We were seeing the same issue on our end, and we've since fixed this issue in a recent update of Storyline 360.

Are you on the latest update of Storyline 360? To check, click the Help tab, then click About Storyline. You should see 3.26.18364.0 in the bottom-right corner.

If you find you need to update your software,  just launch the Articulate 360 desktop app on your computer and click the Update button for Storyline 360. Details here.

The funny thing is it doesn't happen to everyone. We have a couple of guys, one in Windows, another in Mac... both using latest Chrome, and it's working fine on their end.

I have the Storyline before that update. will test it with the new update.

However, it's weirder than I thought. I accessed an old course in our LMS (2015 so we could've used SL1 or SL2). One module (SCORM package), the slider issue is present, but on the next one, it's working fine. In my teammate's laptop (Mac + Chrome) there's no issue with the volume slider.

I tracked down the SCORM packages, extract them in my local drive, opened them in my browser, and both modules have the slider issue.

Ultimately, you'll want to republish your course with Update 26 to prevent this from happening in any player or window size. Let me know if you have questions about that!

It's not the window size. I'm viewing everything at the same maxed out size.

Yeah I suppose republishing would fix it. Just curious as to why it works on some, and not on some despite being published using the same old version of SL.

Keep us posted on how it goes, Calvin. We're here if you need help along the way!

looks like the new SL didn't fix this problem for us. but it is the window size... or to be more specific, the resolution of your display. scaling is messing things up. If you view it in a wide monitor or a wide display, this issue will show up.
Zooming in will solve the problem.
We also noticed that in Windows 10 -

Locking the player at optimal size didn't solve this problem.

Update: Looks like locking the player at optimal size worked but make sure you clear your cache when testing.

Hey, Calvin. Thanks for the update, and I'm sorry to hear you're hitting this problem again.

I created a simple slide in Storyline 360 Update 26 with an image covering the background. The player is set to scale to fill the browser window.

Do you notice that the volume slider is hidden behind the image when you view this link?

Do you have a link you can share with me so I can test your file on my side?

hi alyssa, revisiting this. do you know what's causing it? why did the problem started showing up recently? do we have to republish all of our old courses with the latest storyline?

Just got another report of an old course (2017), aside from the volume, some elements on screen are not showing up. again it's happening to some people while others are seeing it ok. for example, using chrome on my office laptop i'm seeing the problem, but it's working fine on my home laptop using chrome. both laptop are on windows 10.

i made a video of a sample bug (not the volume slider but a text onscreen). When i zoom in to 110% i can see the text but below that, it disappears. again, this happened on my office laptop using chrome.

So sorry you're still dealing with this. We've seen two similar issues in Storyline 360, so let's tackle each one.

We're happy to give you a second pair of eyes on your file, if you'd like. You can send the file to us privately here, and we'll delete it when we're done troubleshooting.

Any updates on the volume slider appearing behind slide content issue?

We're still seeing an issue in Storyline 360 where the volume slider appears behind the slide content in Safari and Chrome on Windows. Specifically, this happens when player size is set to Scale player to fill browser window.

Does that sound like what you're seeing? What web browser were you using when you noticed this problem?

Yes, I can confirm this is still happening, just updated to Build 3.31.19951.0 and the volume slider in Chrome is still a problem, if you scale the window size down it appears and as you scale the window to full screen view it cuts off the upper half of the slider, you can still use it though. This does not happen in Edge or Firefox. This happens with all project files, so not just one, and this doesn't happen in the preview panel.

Thanks for providing that image and confirming this issue is still occurring.

From previous cases, it looks like select animations cause this issue. Are you using the same animation in every course?

It would be helpful to take a look at your file. You can do that by sharing it here in this discussion by using the "Add Attachment" button. Or if you would prefer to share the course privately, use this link to share with our Support Engineers.