Any Data on Use of Avatars as Guides in eLearning Titles?

I was in a discussion with a colleague who doesn't see the value of a "guide" in eLearning titles. She called the use "cheesy". While I have seen my share of "cheesy" avatars, I can see the value in having something for the learner to focus on here and there, like at the beginning and end of a piece but possibly also somewhere during the interactive presentation. I stated that I couldn't offer any data on how using a guide improved the learner experience, but that "in my gut" I thought it to be true, generally speaking.

Anyone have any thoughts about it? Any hard data?

Oh, the content is what has been ILT for our software package for Fortune 500 accounting customers. Pretty dry stuff, so my thought was to liven it up a bit.

In the research, these guides are sometimes called "pedagogical agents" or "avatars."

Clark and Mayer's eLearning and the Science of Instruction summarizes some of the research, although you can find snippets of that elsewhere as well.

You can see a snippet from a book here describing a learning outcome improvement and increased motivation (summarizing from Clark and Mayer).

On the other hand, this study found that pedagogical agents were more effective for K12 students than for older students.

A search on Google Scholar or other sources will give you many more references.

I have found that often when someone doesn't see the value of a particular design element, it is because he or she hasn't seen examples of that element used well. Research can point to whether using a "coach" character is generally helpful or harmful, but even if the research suggests it's helpful, you still have to use it well. Or, said more succinctly, you have to avoid being cheesy with it.

From a practical standpoint, I have sometimes found "coach" characters to be very useful. For example, if I'm creating the course as an interactive story, I may have a small handful of characters. Many of these will be foils for the learner. That is, they will give bad advice or suggest wrong actions that the learner must reject. Or they may be playing the "fool" to the learner's "genius" role, meaning they ask the dumb questions like "Why do I have to use an electrically insulated tool here?" to which the learner will have to choose an appropriate response. This creates the problem of how to let the learner know if he or she did in fact give the correct response. The "fool" character can't be a reliable source of that information, because we've already established that he doesn't know. So this is an example where it's useful to have an established expert coach character who stands outside the story proper who can pop in and authoritatively provide advice and feedback.

There are other advantages to having such an expert/coach character too, including greater flexibility to insert additional information about topics (information that probably wouldn't come up in the main flow of the story), better ability to call attention to important points, and so on.

Here's an example I did recently: Working Safely with Compressed Gas 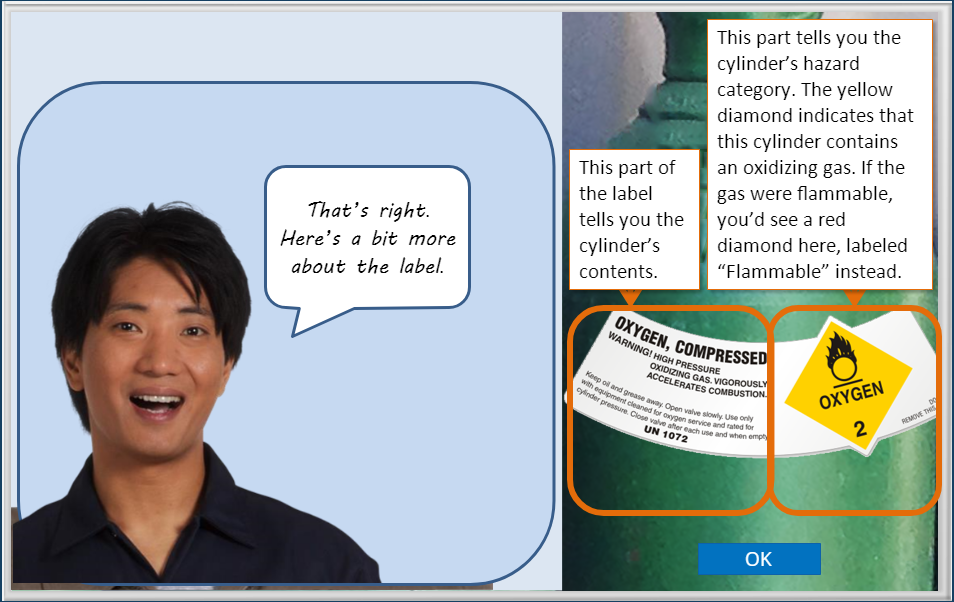 You have to get through the first half-dozen slides at the start before you get to Module 1, where the real story begins. You'll see that the expert/coach character, Quan (from the Storyline 360 stock character library) doesn't appear frequently, but he does help establish when something is right or wrong and he does offer additional information about certain things (for example, about the two main parts of the printed label on the cylinder in the screen-shot above).

Anyway, you can take a look and see if it gives you any ideas about how you might be able to use an expert/coach character in your own courses. I guess this is more "practice-based evidence" than "evidence-based practice" but hopefully it still helps.

Thanks, Christy and Ray. Your links, examples and experience are quite helpful.