I have recently managed to persuade our organisation to purchase  Articulate studio '09. I love everything about it but have always had accessibility issue in mind. So I just wanted to get some ideas on how best I could implement accessibility on my new eLearning project. The project involves authoring our training materials into SCORM packages and uploading them to Moodle.

Any ideas or suggestions how best to implement accessiblity on our courses?

Look forward to hearing your advices, suggestion and examples where possible.

Here is the link that you might want to read if you are interested in accessibility issue. If possible, read the main article and the entire comments as well. Then, you could have a better understanding of what is going on.

I have reviewed and used this method above for our projects at Harper College. It works as an alternative solution to the Flash presentation; but the Microsoft Word document that is produced should be modified some to create clear document structure, by means of Heading styles and the document map(2007 and earlier) or navigation pane(2010+), and Alt-text created for each of the images. Linking to the transcript, is alright, within the presentation, but isn't much help if the assistive technology cannot navigate the Flash presentation properly.

Once this has been done, I usually save to PDF, and make sure the reading order is working correctly by testing with the Read Out Loud option. If this is not working properly, it can be fixed fairly quickly with the Touch-up Reading Order tool in Acrobat Professional.

Other steps  that I do to ensure accessibility of the PDF is as follows:

I am looking forward to seeing whether it will be any easier to ensure for accessibility in the next version of Articulate Studio on Storyline. Features I would like to see: Fields for adding Alt-text for images, labels for form fields and buttons, output to semantic HTML, ARIA landmarks for HTML5, and ability to add notes or directions to Engage and Quizmaker interactions.

I'm a teacher creating some e-learning language courses.  I have articulate storyline and love it but am concerned about making things accessible (requirement for a public school.)  As a general rule, I'd love to have some drag and drop and other interactivities but am not sure about how (if possible) to make those accessible to blind students who cannot use a mouse?  Is everything created with storyline keyboard accessible in the timeline order?   Sorry to have to ask such a basic question but I'm sure accessibiliy is an issue for everyone.  Also - this seems like it ought to be basic but haven't figured out how to do it.  How do I add alternate text to a picture?  If it's not possible, then I guess I won't be using the software as much for the online classroom as I'd hoped.  Shame as it seems fun to use.

Sorry no one replied sooner.  Alt text: you add it in PowerPoint 2007 and higher by right-clicking on the image and choosing Size and Position, then filling in Alt Text in the Alt Text tab.  In Storyline you do it exactly the same way.

Artculate presenter 09 does not produce Accessible content.  The lame workaround is to publish a parallel version in Word and create a link to that. Note that the Word document itself needs to be made accessible.  The top of this very thread gives some ideas for that.  My accessibility people do not consider that a viable alternative for the vision impaired because it doesn't provide a comparable experience.

I'm currently working in Storyline and working very hard to try to create content that is user-friendly to vision impaired users.  The inability to control tab order (the order in which objects are tabbed to with the tab key -- a key aspect of a visually impaired user getting through a given slide) is a huge constraint, but other than that it's a wonderful tool.

Your intuition that drag-and-drop would be very hard for the visually impaired is spot on.  I don't think there is a way to make that kind of interaction accessible to visually impaired users NOR those who can see but require keyboard-only navigation.  So if you're dead-set on a drag and drop interaction, you would need to have some kind of link to an alternative activity (such as multiple choice) that could be operated via keyboard.

Thanks for answering.  I design  online classes for high school students learning German and the drag and drop and other interactive items are great for that age group when they need instant feedback for reading/writing practice.  Repetition is the key for language learning and it has to be fun to maintain the interest of today's students who may be taking a required course.  Of course, for high school, the chances of having hearing impaired or visually impaired students is quite high - and it's hard to offer some students a "fun" way of practicing vocabulary - but I'm sure I can figure out a work around... with a little creativity, thought and work on my part.  And of course, as a public school, we have to comply with ADA by ensuring that all students have equal access.  As I develop activities and alternates, I'll be sure to share how I do it.

I think that this subject is very interesting, as e-learning makes training possible for people who have difficulties in going to certain places, etc.

So it'd be very interesting to find easy ways to make courses accessible.

I write here to be sent replies to this interesting post.

Today's Articulate email, "How to bring objects in your course to life" offers a good alternative to drag and drop that I think would work with keyboard navigation.

the middle video offers the tip of moving the object for the user by changing its location in the visited state.  I think you could tab to an object, select it, and then it would "jump" to the "correct bin" or whatever.  You would, however, need a sound effect or something to tell the visually impaired learner that in fact they had selected the proper object....

Another tip I picked up from a guy who designs complex Excel forms is that you can add additional text to a text box to help the visually impaired user understand what they are looking at.  Ironically, this additional text can be invisible!  Add extra text, make it 1-point font, and change it to the same color as the background.  The screen reader will still read it just the same, but the normally-abled sighted learner won't ever know it's there.

For example I have a slide with 3 tabs the user clicks to explore.  The instructions say, "Click on each of the tabs at left to understand more." The tabs are labeled Who, What, Where.  I'm afraid the visually impaired user will just tab to it and hear the word "Who" but they might not realize that it's one of the tabs.  So I put a 1-point phrase before the word Who that says "Tab 1," and I make it the same color as the background.  Now when that object gets tab focus, JAWS says, "Tab 1 Who."

If the object doesn't already have text (like it's a clip-art image), you can add alt text that doesn't just say "banana" but "press the space bar to select this banana if you think it belongs in a healthy diet."

You can see my issue in attached image. 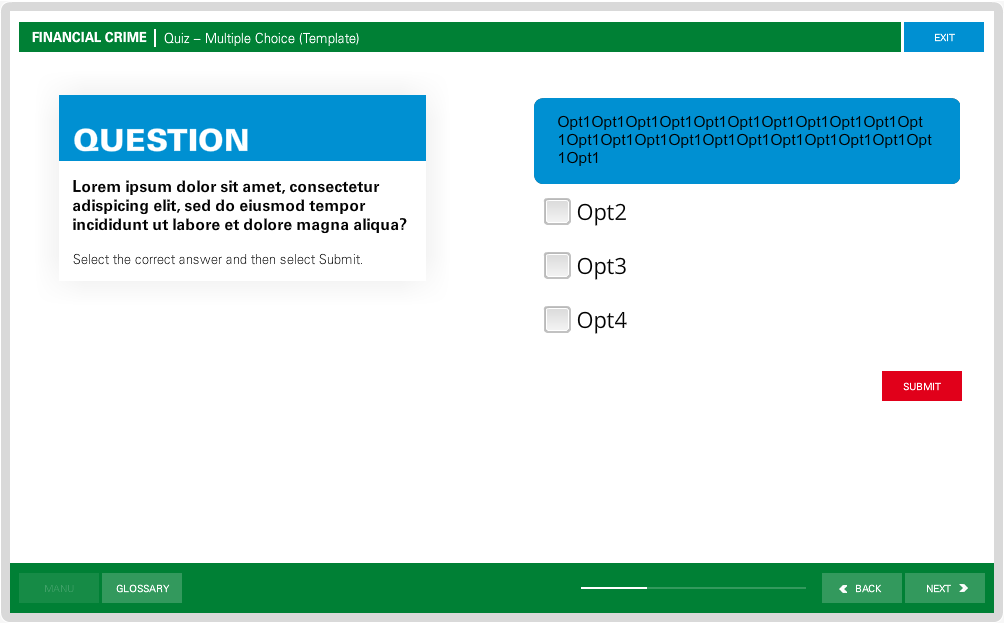 Can anyone Resolve this issue?