How an Idea Becomes a Law

I'm developing a new employee orientation for people new to Oregon state government.  Part of the orientation is describing how an idea becomes a law through our legislative process.  We have this nifty graphic that I would like to use.  I'm reaching out to all you fabulously creative folks to pick your brains for how I could create this process in Articulate and bring it to life!  Here's a link to the graphic http://www.leg.state.or.us/faq/lawprocs.pdf.  Any suggestions are welcome.  Thank you

It's a long process that gets a little crazy in the middle. I think simplifying / categorizing phases and then taking on each one an activity / task at a time might be a good approach.

How does an idea become law?

What happens between the conception of an idea and the idea becoming law?

Maybe contextualizing it with a story? Susan Citizen has an idea. She sees a common problem with X. To her, it seems like a simple adjustment to the law will fix the problem. So where does she go first? To make this adjustment to the law, she'll need  to get a bill sponsored into legislation. This usually happens like this...

I'm thinking something in Quizmaker and make it into a game with lots of branching.  First, start with a brief story then give the learner a list of the steps (or limited options) and see if he/she can figure out the correct sequence.  It's a great opportunity to help them follow the flow logically.  You can even use a timer to add some excitement.

...for example, you can pick up where it says "Bill is Introduced and Read for the First Time".  What happens next?  Give them the options of:

If the user selects "2. Committee holds public hearings and takes action,"  your feedback can be "Which committee was the bill assigned to?"  You can use this opportunity to teach them that there are a lot of committees, etc..

If the user selects "3. The bill is passed with amendments" you can educate them on why the bill needs to be assigned to a committee first and what happens if there isn't a public hearing, etc."

I just love training based on letting people explore and make mistakes. 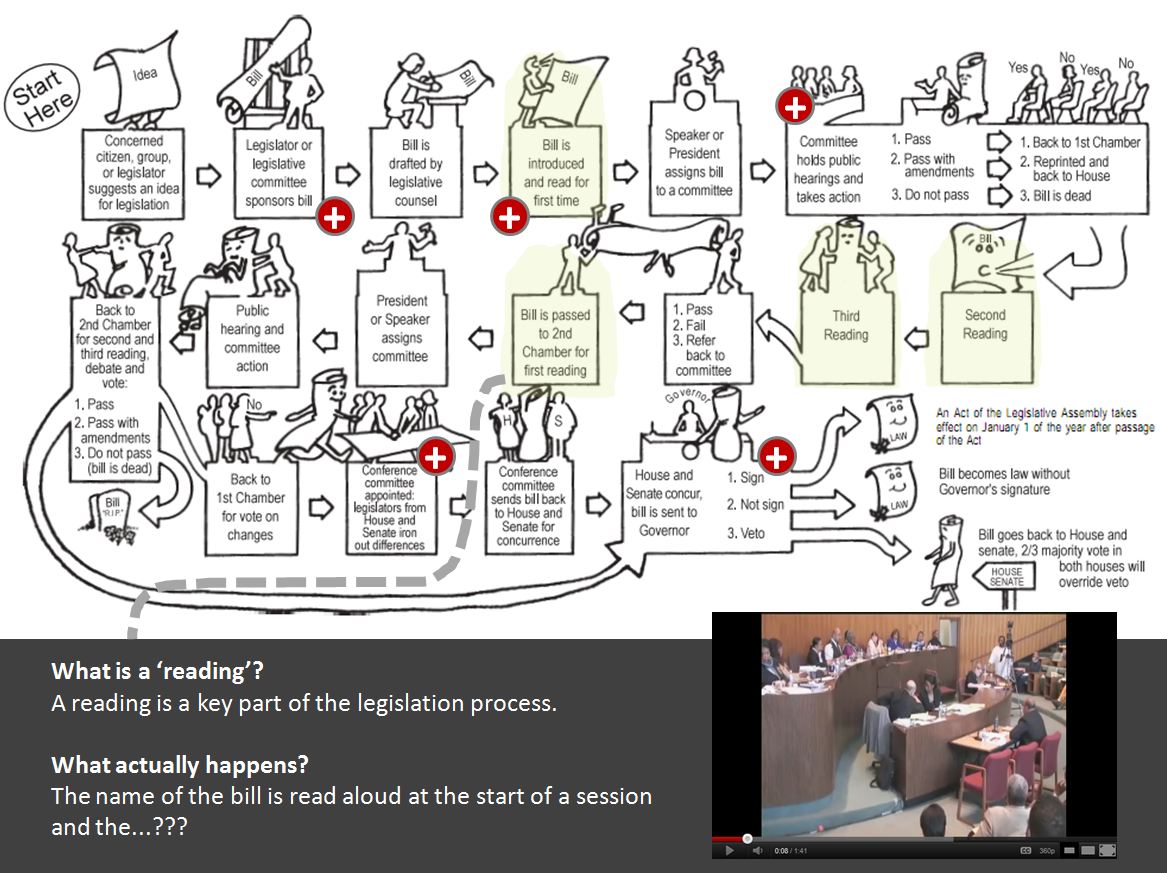 And here is my comment...which got deleted when I inserted the image...

Although the infographic initially looks friendly its soon dawns on you that it's just a series of fairly boring steps disconnected from anyone's reality (not including lawyers of course). Creating this as a timeline with 17 steps would be pretty tedious.

A quick scan shows that there are some key concepts which are repeated (e.g. a reading, role of a committee) so it might be best to describe these foundational concepts rather that describe each step.

I also feel a guided discovery approach would work best - get your learners to explore the process (possibly using one or more Engage hotspot graphics) but make them aware that there will be a quiz later to check their understanding.

I also like Steve's idea of creating a story - maybe follow the basic 'tour' described above with an example. Of course the example won't test all the possible avenues but it will bring the core process to life.

Attached is a quick visual which could also include some real video footage of a legislative session (for example you could show an actual 'reading' taking place - my guess is that they just read an overview and not the whole bill). Hey I'm not a lawyer... ;-)

Would be interested in your final solution. This could make a good exercise for my next ID/Articulate course!

These are great ideas!  Keep them coming!!

One thing I meant to add was that its pretty clear to me that the learning objective is NOT to know all the steps in the process but to understand the key concepts (such as the meaning of a reading or the role of a committee). An idea of the time it takes plus the likely stumbling blocks is also pretty key and probably far more interesting to learners than the detailed steps. Probably a useful area to explore is 'Where things go wrong!'. Paradoxically learners are more interested is how things go wrong than how they go right...that's human nature I guess.

Anybody remember this one?

Doug - Love that video. It would provide a really engaging start to the course. Maybe a link or even better an embed on a page in the LMS. I'm a big believer in curation before creation! And if you really want to cover all angles try this:

Thanks!  I found that it inspired some additional ideas or variations on the same concept.  Maybe instead of using a song and cartoon characters you could use 'real' people (from elearning brothers) and dialogue and/or narration.

Thanks everyone for the ideas.  When I get something developed I will post it to the forums.