I've made an interactive video where markers appear at various points. The user clicks the marker, the video pauses, and a text box appears. When they close the box, the video resumes. This works fine. The issues are with Play and Replay buttons that I've tried to set up. Rather than explain everything I've tried and how it doesn't work, I'll just ask.

This is what I am trying to achieve.

Are you able to share a copy of your Storyline file here as that would be a big help in diagnosing your problem and providing a solution?

Ned - thanks for replying.

I want to return to the start of the timeline when the user clicks Play because I can't control how long the viewer sits on the page before clicking the Play button, and the triggers within the video are tied to the page timeline. It seems like the video should have a separate timeline but if so, I can't find how that works.

I've looked at several interactive video examples but they all start automatically.

The video is proprietary. Can I send the file to you at a private account?

Thanks for your put.

If you place your video on it's own layer, the layer timeline effectively becomes your video timeline and should therefore give you more control over it.

If the video starts automatically whenever the layer's timeline starts, all you should have to do is to show the layer whenever the Replay button is selected. As I am not at my computer right now I cannot check if you may have to close the layer first or not, but there will be a simple solution to this as well.

I will put together an example and get back to you later today.

I have attached two versions of my file as I am not sure if your video only fills part of the slide or the whole slide.

Note that, in the slide properties for the video layer, the "When revisiting" option is set to "Reset to initial state": 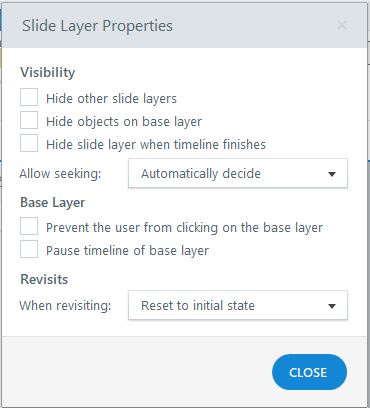 I don't know how you have set up your markers, so I have simply represented that with an information button that appears 4 seconds after the video starts playing and this then pauses the video and opens an information layer. Closing this layer then resumes the video. I didn't concentrate too much on this area as you indicated that your option was already working fine.

Hopefully what I have done with the Replay control will give you some assistance in solving your problem. If you have any further queries, just get back to me here.

Thanks for these examples. I set it up like V2, with the Play and Replay buttons on top of the video. I tried to duplicate your sample, but when the user clicks the marker on the video layer, the video disappears. I think I must be setting up the layers incorrectly. Attached is sample. Thanks.

The zip folder appears to be empty. I am unable to extract anything and my computer tells me that there is nothing to extract. If you are able to re-post, I will have a look and try and sort it out for you.

You didn't attach the file !

Try this one (there is a file attached 😉

Posting this in case my email doesn't go through

There are a couple of issues that are easy to resolve. First, the reason the video layer is disappearing is because, by default, Storyline hides other layers when a new layer opens. To avoid this happening, all you need to do is to double click on the new layer in the Slide Layers list (bottom right of screen) to open the Slide Layer Properties dialogue box and de-select "Hide Other Slide Layers": 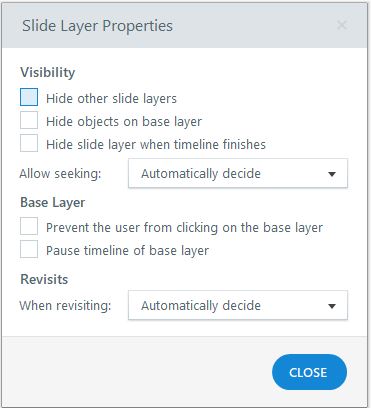 P.S. I like the use of Dr Robin to avoid using your proprietary video, but I'm not sure I would want him to conduct the operation !

Ned - Appreciate your help with this! Agree that Dr. Robin would not keep the field sterile!

I created an interactive video in PowerPoint; here are the instructions. They might help resolve your problem: https://blogs.articulate.com/rapid-elearning/create-video-3d-models-powerpoint/.

That is interesting 3D - thanks!