I've been working with scrolling panels. Here's a demo showing a few ways to use them in explore/explain situations.

If you haven't tried them, scrolling panels allow you to present larger chunks of content, including controls, inside a rectangle that permits vertical but not horizontal scrolling.  Basics for Storyline 2 here.

Creating a scrolling panel is easy:

How to get objects into the panel

Objects on your slide don't automatically go into the panel.

If they were already on the slide when you added the panel, click and drag them. Pay attention to what I call the drag point - the spot where you click and hold an object so you can drag. 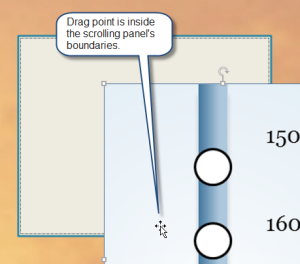 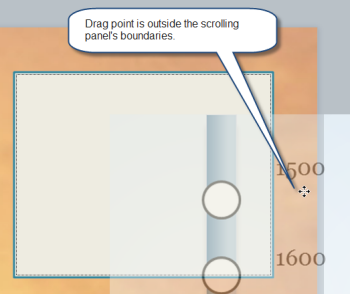 When an object's inside a scrollable panel, you'll only see the portion of the object that's within the panel boundaries. For parts beyond the boundaries, you see only the object's outline. 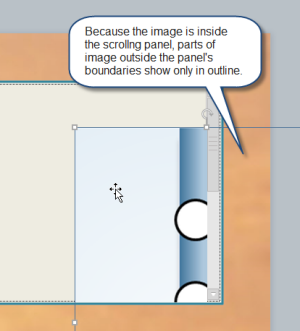 How wide should your scrolling panel be?

At least 20 pixels wider than the object you plan to scroll. You can't scroll horizontally, and the vertical scroll bar takes up about 20 pixels. In my demo, the scrolling panels are each 380 pixels wide. I made sure my scrollable objects were no wider than 360.

When you insert a large object (like an image), Storyline will scale it so it fits within the dimensions of the slide. For a tall object, the width might be much smaller than you want.  Here's what I do in that case:

If you know your panel's width, you can subtract 20 and enter the result for your object's width.

What about positioning clickable shapes and hotspots?

These interactive elements  work just like other objects: when you first add them to your slide, they're not contained by the scrolling panel. Use the drag-point technique to get them contained. Then they'll scroll inside the panel, "staying in place" relative to the underlying object as in the attached demo.

If you want the clickable shape on a part of the scrollable object that's not visible at the start, use the panel's scroll bar to display the desired location inside the panel's boundaries. Move the clickable to that location, using the drag-point technique.

You could also drag your object completely outside the panel. Next, position all your clickable items. Finally, select all the items and the object, and drag the whole group back into the panel. This works but to me feels cumbersome.

Advice you've heard elsewhere: name your objects in a consistent, easy-to-understand way. The "highlight layer" section of my demo has four callout objects, four highlights (the shapes outlining sections of an image), and four text boxes. Naming conventions made setting triggers much easier.

Adding this topic as a challenge idea. Thanks for the cool demo and source file, Dave!

You're welcome. I was having a hard time figuring out when the interactive stuff was on the panel, and when it wasn't, so I did a lot of experimenting. It took quite a while to figure out the drag point business.

I upgrade to storyline 360 and not the B&C callouts don't work properly on the first example. They only flash up very briefly. Not sure if it's a bug or not.

Hi Tristan - I noticed the same thing, too. I reported the issue so the devs can take a closer look.

I had a "not working properly" (or "as expected") situation on the third scrolling panel (the timeline). I tried having "appear on hover" text related to each of the circles on the timeline -- show the year on hover, hide it again when moving away. But sometimes the year stayed visible, even after clicking another circle on the timeline. I couldn't find a consistent pattern, so I removed it from my demo.

I'll try recreating it and posting it as a question.

In Storyline 2, I ran into odd behavior elsewhere with states, so I'm wondering what happens to the disappearing callout circles if they don't change state when you hover. (I don't have Storyline 360.)

Background on the demo: so you don't have to piece it all out yourself.

Most of the action takes place on one slide, scroll panel demo, which has a base layer and four additional layers.

From an interface point of view, next time I'll include something in the explanatory textboxes to confirm the callout they belong to -- so it's easier for you to tell that you're reading the explanation for callout C and not A or B.

Get your scrolling panel on in this week's challenge: https://community.articulate.com/articles/using-scrolling-panels-elearning

Thanks for the inspiration, Dave!