Suggestions for creating a lesson on how to design a page

I'm creating a lesson on the basics for designing a page.  A few of the topics include the principles on how to use color, font, and messaging.  I thought it would be neat for the learner to create their own page based upon the principles they're learning.  Any suggestions on how to do this using Storyline?

Any additional ideas you can share?  I'd love to hear them.

That's a great idea! You could also present them with some poorly designed pages and ask them to suggest some improvements.

Any tips/suggestions on how to create your idea in SL2?

Thank you for your help.

You could take a screenshot of the page and then insert hotspots on the things that you want them to recognize as problems (fonts that are illegible for example).

Then you have a couple options:

I'm sure there are many other ways to do this, these are just the ones that come to mind right away! I hope that's helpful

I'll create something based upon your suggestions and will post here, for your feedback. Sound OK? Thanks Allison.

You're welcome! Sounds great :) I can't wait to see how this turns out.

I could use your help.

Attached is my initial direction with this lesson.  The design principle is included in the Notes section.

Any thoughts on how to blend your idea of identifying the lack of a design principle with this PPT?

Not sure if I'm making sense so let me know if I'm not doing so. :)

I'm not seeing an attachment here. Can you go back and add it?

Sorry Allison. Attached is the document.

I think what I would do is have a poorly designed version and a nicely designed version and then ask myself, "what's the difference between these two versions". For example, I would ask people "what are the 4 things you could improve on this page? click on the items". Then once they click on a correct answer, you could either show the improved version or ask them to choose the reason they clicked on that item. It depends on their level and how much you're expecting them to know how to do.

I hope that makes sense!

It does Allison. Does using space & planets as the subject matter help or make the process more confusing?  Thank you so very much for collaborating on this project with me.

The only thing about using space as the subject matter is that it may be confusing since you can also talk about space (like white space) in the context of graphic design. Just something to consider!

Good point, Allison.  I'll do some work and send you a draft Storyline File asap. Thanks so much!

You're welcome! :) Happy to help

I like Allison's idea of having learners identify elements of poor design. Can you take that further? I think so!

If the business goal is to improve people's PowerPoint designs, that implies that the course should present learners with a wide variety of business topics about which they need to create a PowerPoint presentation. That's a huge topic, so you'll want to have some basic underlying principles that can guide learners when they are evaluating their (or other people's) designs. For example:

Your subject-matter experts may have other or additional principles in mind, so check with them. Make sure you have a manageable number of specific principles you will be asking learners to learn and apply, otherwise the course will likely end up vague and ineffective as the possibility space is so large.

For learners to get good at applying these principles, they will have to practice applying them (seems obvious). So I might focus activities in the course along these lines:

This still doesn't get you to the end goal, though, of having learners design their own presentations, so after they've reviewed a few presentations that others have created, make them design a few of their own:

Anyway, those are my brainstorming ideas. Hope they help!

Thank you so very much for spending time sharing your ideas - which I love!

Would you share how you'd implement these two ideas in Storyline II (SL2)?

Present the learner with a (fictional) co-worker's "first draft" presentation. The co-worker is asking for feedback, so this gives the learner an opportunity to identify ways the presentation could be improved.

For each design item the learner identifies as "needs improvement" (e.g., by clicking it on the co-worker's first draft slides), ask the learner to "explain" why he or she identified this feature as needing improvement by choosing the particular principle it violates from a list of the principles. This should have the effect not only of helping learners identify design elements that need improvement, but should also ensure that they can articulate why based on the underlying principles they are learning.

Also, how would you implement this idea in SL2?

Again give learners a few paragraphs of text as the raw content, then allow them to choose images (from a mock stock image database, for example) and where to place them on the slide. Give them several draggable text blocks that they can choose to drag onto the slide (or into the speaker notes section instead), etc. Then have the "co-worker" review the resulting presentation in terms of the underlying design principles they've been learning. If any principles were violated, have the learner go back and "revise" (i.e., try again) until the presentation aligns with all of the important design principles

Let's say the principles you're teaching are the following:

Then, to answer your first question (How to give the learner the chance to 1) identify principle-violating design elements in a coworker's design, and 2) identify which principle the identified design element violates):

You'll need to design a slide that has design issues for the learner to find. For example, suppose you build a timeline slide like this: 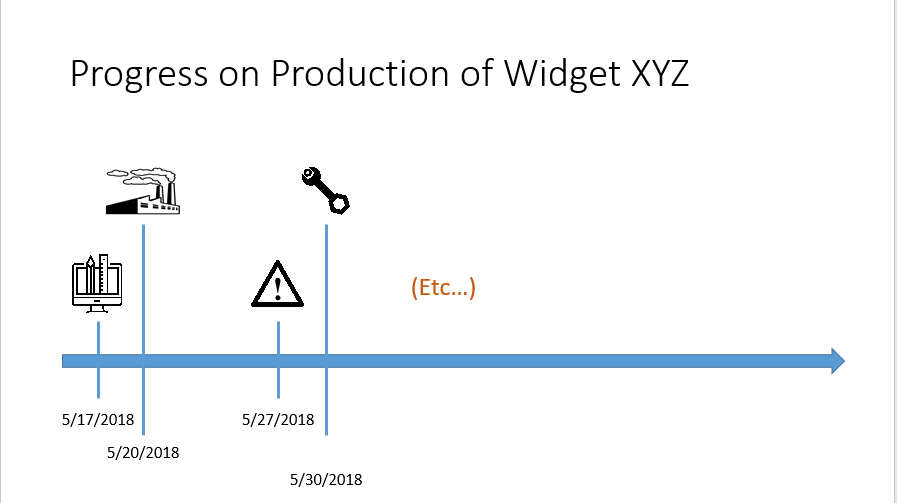 The learner would have to recognize that 5/30/18 violates the "alignment" principle: it should be aligned with "5/20/2018" but instead it is too low on the slide.

What is the problem you see with this element?

The learner would click one of these options and you'd provide feedback about the learner's choice. You'd do this for every element on the sample screen until the learner has identified all the problems and why each is a problem. (Obviously, you'd have to litter the sample slide with more problems than just this one for the exercise to be interesting).

When you're ready to give the learner a chance to design his/her own slide, you could maybe set it up as an email request from the learner's manager: 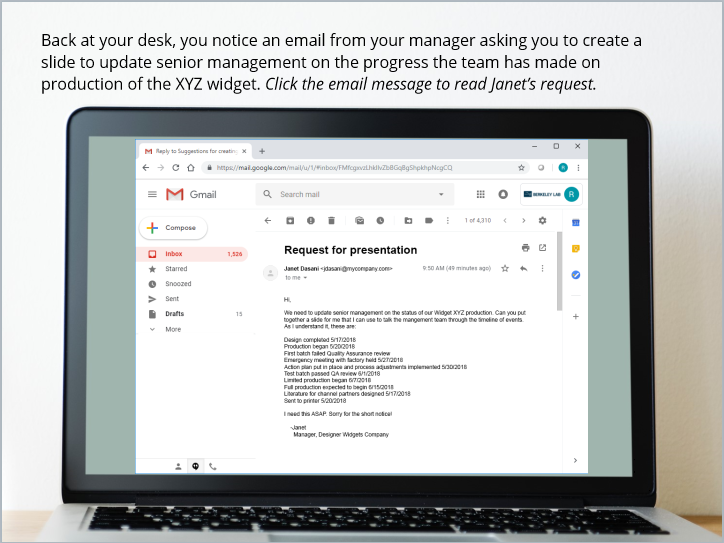 When the learner clicks the email message, you'd bring up a layer with the message written a bit larger so that the learner can easily read it. When the learner is done and clicks OK, you can move onto the next page in your course where the learner constructs the requested slide. My original thought was to do this as a drag-and-drop a bit like this: 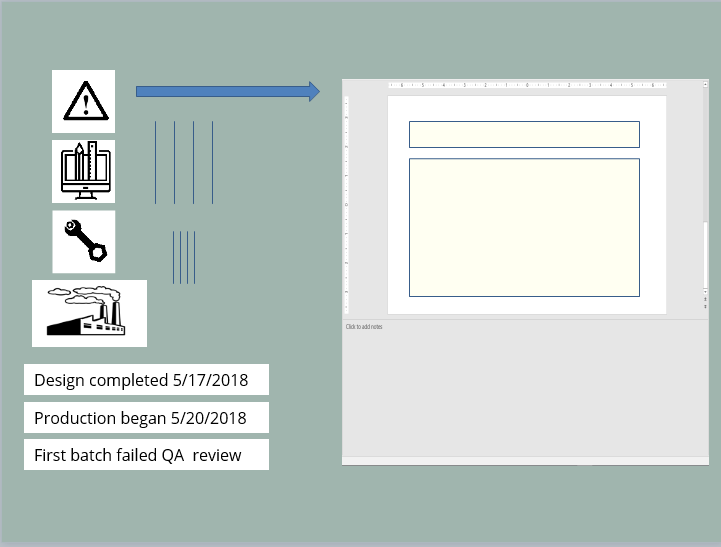 The learner would drag elements from the left onto either the PowerPoint slide section or PowerPoint speaker notes section (I forgot to put a yellow drop target in the speaker notes section, but if you want learners to be able to drag to that section--and I'd argue you do--then there would need to be a drop target there too). I only put a few of the elements on the left, but in reality they'd all need to be there.

In mocking this up, I realized that this would be very challenging to implement because the "bad" design (see below) and "good" design (also below) have different elements in different positions on the slide, making it hard to put drop targets  that could accept either design. 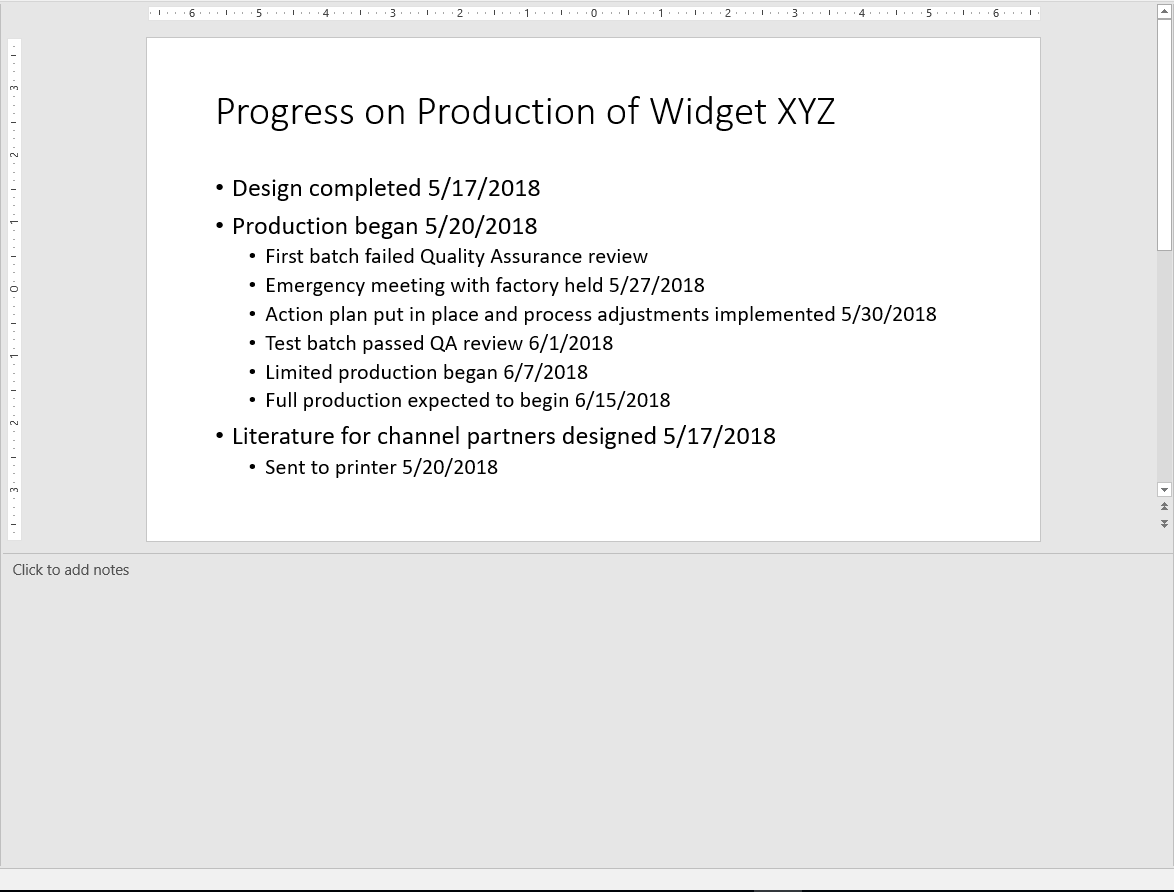 [Above: a "bad" design for a PowerPoint slide: all text, no images] 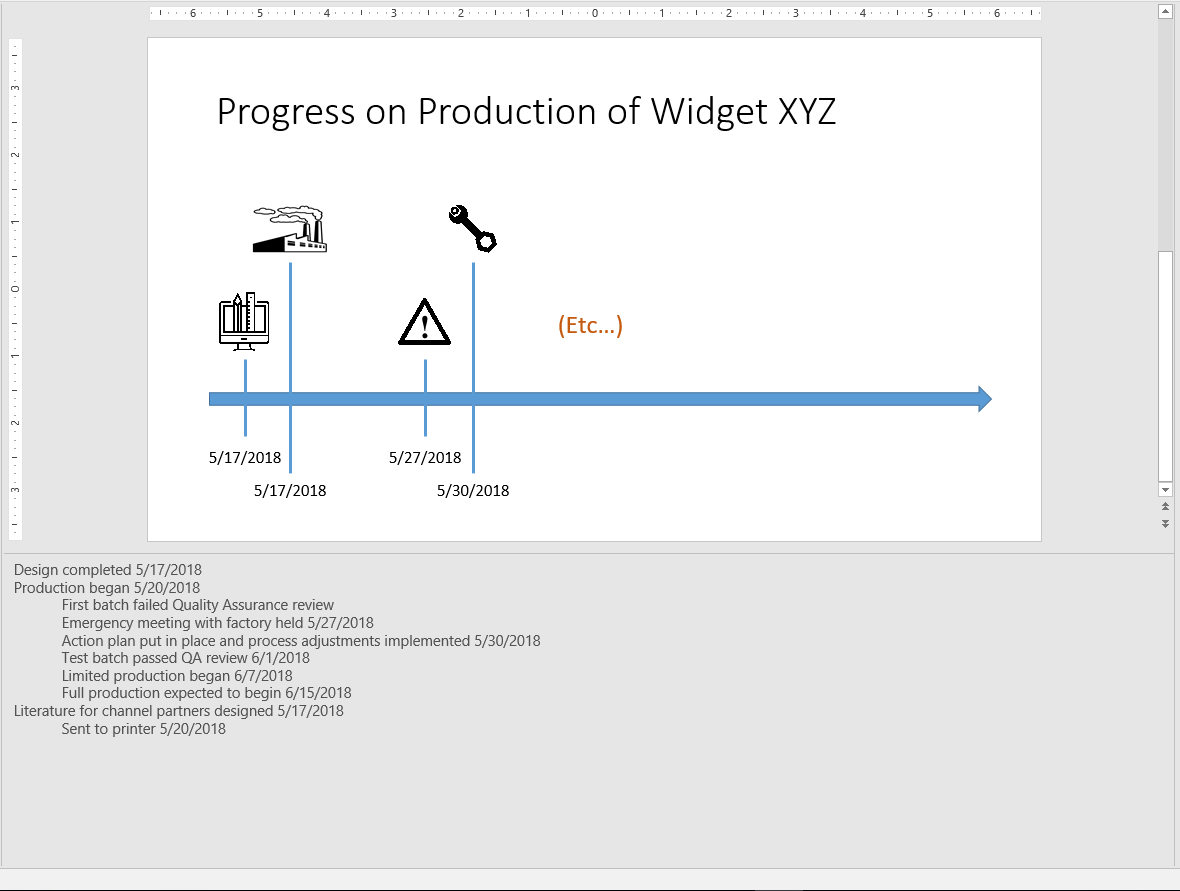 So you will have to put on your thinking cap and see if you can devise a clever way to give learners enough control so that they can create either a good or a bad slide. Maybe you could use a drag-and-drop like I originally thought if you first have the learner choose the PowerPoint slide layout: e.g. "Title + Content" or "Title + Picture". That would allow you to arrange the drop targets differently depending on which layout the learner chose. But clearly a bit more thought needs to go into how to implement this activity.

This is the fun part of designing in Storyline!

I'm going to be working on this project today. So, I'll dig into your suggestions - which read of awesomeness! - and message back.

Thank you so very much for helping me Ray.  I'm truly appreciative.

Ok, I've read through your suggestions, Ray and love them!   Let me see what i can do with the time I have for this project.

Thanks again for sharing your ideas and time, Ray.  I'm so grateful!

I'm follow your creative ideas in the development of  this project.  One of the ideas is the use of a bad-example - Using Hot Spots and a poorly designed page.  Is there a way to assign points to when  learner selects the correct answer? For instance, for they click  on the correct hot spot?

Yes, just convert the slide to a freeform "pick one" interaction. Here's a tutorial that tells you how to do that.