Hello everybody! I have recently been tasked with just about everything that has to do with training (web, print, in-person). Yay, me! I have Storyline and love it, as it allows me much more flexibility then my previous solution. Now, however, I have to make some big decisions which don't have anything to do with the course content.

I'm looking for input on how to set up my training room. Let's say it's a giant rectangle (60ft x 40ft). I already have a projector mounted towards the front of the room which is where I normally present the material. I'm adding two more screens to the room and i was wondering if anyone had any experience with various technologies used in training rooms. My current idea is displayed in the picture below: 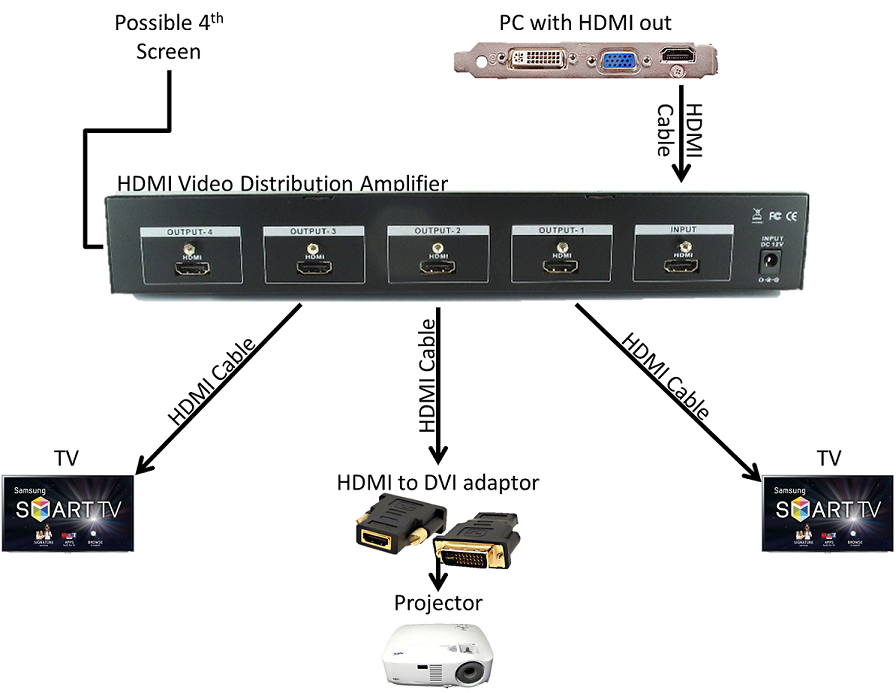 My projector only has VGA or DVI so I have to use an adaptor to switch HDMI coming out of the distribution box. I was wondering if a 1x4 VDA (video distribution amplifier) was the way to go or if there might be some benfits of exanding that  to 2x4(or 8, although I don't know why I would need 8).

The screens would be set up similar to what the picture shows. Projector screen in front and LED screens to the sides and maybe one in the back of the room if I ever got to that point.

What do you think?

Fun project!  Ok this is some advice from an ex-AV guy who's been out of the business for a while, so please keep that in mind!

One of the video connections schemes does not play well with distribution.... not sure if it was DVI or HDMI, but thinking the latter. What happens is there is a "handshake" of sorts between the devices, so when you go to turn one on/off for example, it messes with the others. Now they may have solved that... but even back in the day there were lots of devices that CLAIMED to do this sort of distribution well, and I guess they did... As long as you met a bunch of conditions such as identical screen resolutions, no adding/dropping devices after initial sync, no changing source resolution requiring resync and or scaling (such as when switching from an HD to non HD tv channel) etc.

My advice would be to go to a pro for this sort of thing if you are trying to distribute HDMI. Barring that, consider distributing in another format to avoid the issue altogether. Barring that, then at least deal with a TRUE pro in the industry such as Crestron or Extron and avoide the dozens of off-brands that make this kinda gear.

Hope this helps and again my info may be old, so take with the appropriate amount of salt.

Thanks for the input, Bob! That's exactly the kind of info I was looking for. (if it gets to long you can just skip to the questions!)

I'm pretty sure that DVI has a problem with distance (at least in my case) and I can only go 15ft from the source of video to the DVI display. HDMI is something like 49ft from source, which is closer to the distance I have to travel to each device. DVI and HDMI are suppossed to be kin to each other, I thought, but I've gleaned this info from the net (and if it's on the internet, it has to be true, right?). In my thinking, everything is HDMI starting at the video card, going to the VDA, and splitting out to each display. I'm thinking of just getting an adaptor (HDMI to DVI) just to see if it works from Laptop->HDMI Cable->Adaptor->Projector. That's easy and cheap.

For the most part, I don't want to do anything special except display the training on all three screens, but hopefully in the future I'll know more than I do today and be able to use all this tech to better facilitate actual learning. So I would like build for the future now, instead of getting to a point where i do know what I'm doing and having to retrofit, if that makes sense. Eventually, I know I will be making in-house videos to include in the training. So let me ask you this:

Take what I currently have, 2 LED Smart TV's, a Projector (DVI), PA sound, mixers & mics, and plan to add a 3rd LED or another projector and a video camera. Is there a wonder device that could handle it all?

Would you reccomend wiring straight to each device, or putting in wall plate connectors?

What (and i don't even know what to call it) kind of 'control box'  or 'remote' would you use to make it all work while giving a training session?

I know I'm asking alot here and I appreciate ANY feedback I receive. I've spent about a week looking up this stuff on the internet and it can get confusing after awhile. In fact, I just saw the names Crestron or Extron yesterday, so maybe I was looking in the wrong direction, but I'll definately be heading that way now. With web searching I find it's often a matter of vocabulary!

Crestron has some sweet stuff!

Always go with wall plates... always. It's a tiny bit more money, but the added flexibility and convenience will be well worth it.

In terms of control, you have a few choices...

Both options 2 and 3 above can be found interfaced through full-blown control panels (think: tablets) or through wall panels. For training rooms, I often prefer a simple wall-panel set up.

As far as one device that can handle switching all of your inputs and outputs... sure there are lots of them. But what many people don't realize is that you can spend as much (or more!) on distribution and control as you can on the devices themselves!!!

The consumer electronics industry has not really made things much easier in terms of standardizing how these things all interface.... hence my suggestion to really consider having a pro give a consult at least. Many small outfits will do a "design only" service; of course they would love to do the install too.

I know it looks like it can't be all that hard to figure out on your own. And I'm sure you could get something that kinda does most of what you sorta want usually all by yourself. But it's all the things you DON"T know to ask/think about what will kill you. A pro will sit with you and discuss how you want to use all this, the various scenarios and what-ifs, then design something that will do all that for you.

Thanks again for the feedback!

I do plan on seeking the advice of a pro when the time comes. Right now I just have to talk intelligently about it, or enough so, to make the proposal.

Before I posted here, I came up with a list of items I would need to hook it all together (very basic) and it was about $600. To add another zero on the end, $6000, is going to take some justification. No matter what I would like to have, it may just not be possible and I would be one of the first to say that 6G's for three screens seems like a lot of money.

I saw that Crestron has an entry level system called Prodigy, which is expandable. What do you think about that?

The Prodigy was coming out as I left the biz, but I know it was aimed at taking that "tweener" market that Control4 lived in. Not sure I've ever seen a bad Crestron product, but just remember that with Prodigy I think you have to stay with that series for everything. Not a biggie usually, but something to remember.

You could do a LOT worse that the Prodigy line. Very respectable stuff.

And if you want to save money, go with just a keypad for now, you can always a touchscreen later. But get the "heart" of the control system set so that it's reliable, does what you want, and then if your needs or desires expand a bit you can add to it.

I just bought my first "LED Smart TV" for home use, and I was impressed by its flexibility. It can be connected wirelessly to the Internet, and to my home network. Though I haven't done it, I know I could put PowerPoint or Articulate-produced content on it. It can play video files from a memory stick (and the resolution is great!).

In previous jobs where I mangaed training in-house and a training room, the best we could do for multimedia was a projector hard-wired to a computer. But with a Smart TV (or two, you lucky dog), why do you need a projector? If I were doing it all over agin with today's technology, I'd ditch the projector in a heartbeat. No projection bulbs to worry about.... years of expected use from the LED screens. What a deal.

You are a lucky man!

My boss is assisting an install at his church this weekend. I don't know if it's Crestron or not, but it sounded like it had the same capabilities. I'll get him to tell me about it Monday.

Crestron is definately top of the line. Just based on what I've seen on their website about the different types of installs is very impressive. I downloaded the pdf 'Every Room Connected Design Guide', which is a very good overview of it all, in an understandable format. And the diagrams are cool.

I appreciate your efforts to 'edjumicate' me and for sending me off on the right path, instaed of the wild goose chase I was on before. Thanks!

I know. I feel spoiled sometimes, except when I'm standing in front of a room full of people, and I probably am! I think the Smart TV's will add to the effectivness of the training and you can't beat the WOW factor. Samsung even has a SDK that you can play with to create your own apps. I've only tried it briefly to make a simple app where you click on a button to change the 'scene' on the screen. It's kinda like Storyline in that respect and I wish it was as intuitive as Storyline. Gonna have to dig in and learn some rudimentary programming, but they have plenty of tutorials and examples on the developer site.

Times are a changin' and so to will the training, but I don't think I could do without my projector. The last set of classes I did required the use of two and i had to train offsite. The room I was in was 7500 sq ft so dual screens, one for each side of the class, came in real handy. Of course, a Smart TV with a wireless mouse & keyboard is pretty sweet to!

Just out of curiosity, if you were going to put a Powerpoint on the LED, how would you do it? Convert to video? Serve it up with a media server?