From what I've seen, the research is mixed on whether or not it helps to have a character as a "guide" for the course. Using characters in scenarios certainly makes sense, though.

As for photographic vs. illustrated, I think that decision depends on a combination of course content and design; availability of the character type and poses you want; budget; company branding guidelines; and personal preferences.

Think of Storyline's classic illustrated characters. They're cartoonish, and that style wouldn't be appropriate for every course. The advantage is that they have a consistent set of expressions and poses. That makes it easy to switch the look while keeping the placement intact.

Obviously, photographic characters provide more realism. They can even be placed within a client's building (assuming you can get good photos for that). In my experience, they're a little harder to swap; the sizing and exact placement of the model within the frame don't always match from photo to photo. But that's not a show-stopping difficulty.

I don't know what the pricing comparison would be for custom green-screen photo sessions vs. custom illustration. Of course, even PowerPoint has "art effects" to make a photo look illustrated, so starting with photographic might make more sense in the long run.

Thanks for sharing the article and getting this conversation started!

One consideration is what you are using the characters to represent. Scott McCloud's great book, Understanding Comics, offers many insights. One of them is this: the more realistic an image is, the more it is restricted to representing that specific person or thing. Conversely, the more abstract an image is, the less it represents something specific and the more it represents the class of object (e.g., people, books, computers--not a specific person, book, or computer, but the concept of these things).

For example, a photo of Ronald Reagan can only really represent Ronald Reagan, whereas a photo of a non-celebrity man can represent any character you want, as long as he's male, would dress more or less like the guy in the photo, is the roughly the same age as the guy in the photo, and so on. You can see that many aspects even of the generic "man" photo are still locked-in specifically by what's in the image.

As the image gets more abstract, the number of possible representations increase. A stick figure of a man and a woman could represent any man or woman, of any age. This is why the icons on public restrooms are highly abstract and not stock photos of a man or a woman. Those facilities are for the use of any  man, or any woman--that is, the class of all men or all women.

Finally, something really abstract, like a smiley face, can represent any person of any age, gender, socio-economic class, etc.

So one way to think about how you use photographs vs. illustrated images is to ask yourself if you are using the image to represent a specific person (e.g., "Here's Sharon. She's your manager in this scenario.") or a class of person ("Studies show that our biggest customers prefer <whatever they prefer>").

I would use a fairly realistic image or a photograph for Sharon, because she is a named character who my learners will be interacting with throughout the course. She's a specific person.

On the other hand, I might use 5 or 6 of the same icon of a person to illustrate the concept of "customers" because customers in this context are not specific people, they are a kind of person, and the icon image can represent a far wider range of possible customers than 5-6 realistic images can.

Combining with Other Images

Also consider what  other imagery is in the course. If the course involves specific equipment, for example, are you going to draw it? Mixing illustrated and photorealistic images together is tricky. If you're not careful, it ends up looking unprofessional. An analogy is in the early days of desktop publishing when it had become possible to choose a variety of fonts, many novice publishers went crazy with mixing dozens of fonts on the same page and it never looked good. Think of styles of image as analogous to fonts. Using one is always safe. If you're disciplined about how you use them, you can usually get away with using two. But more than that will require some very careful thought.

One way to organize images with different degrees of realism is into different roles or different levels of reality.

In comics, there's a style called ligne claire, which, in French, means "clear line." This style often features simple, cartoon characters in the foreground, with backgrounds that have more detail than the characters themselves. Here's a typical example (I believe from one of the Tin Tin comics by Herge): 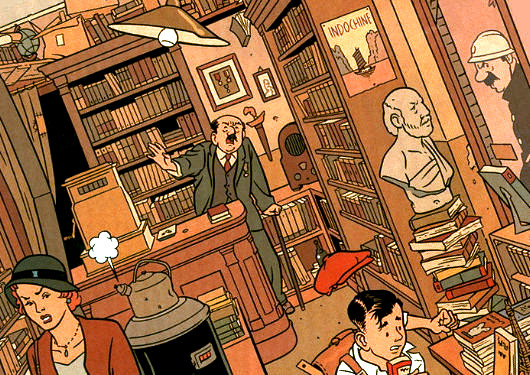 Following this lead, you could probably get away with using illustrated characters over a photographic background, or more abstract (less-realistic) characters over  backgrounds drawn with more realism. As long as you consistently maintain these dual-use roles throughout your course, your choices will likely work aesthetically and not call undue attention to themselves.

But in general, I find that mixing realism levels works best when the characters are the most realistic things on the page. For example, suppose your course is telling a story in the form of a TV newscast. You have a TV news anchor character, sitting behind the anchor desk. Off to his or her right is an inset screen where "news" footage will display.

Your news character says something like, "Today, the CEO of ABC Corporation was arrested for insider trading." On the inset screen, you will show footage of someone being arrested at an office building.

Of course if you do this entirely with one level of reality--say, with both the news anchor and the person being arrested drawn in the same illustrated style or both as photographs or video footage of real actors--then there is no problem. But what if you want to have these two characters be at different levels of realism? Which character--the news anchor or the person being arrested--should be more realistic?

The main character in this scenario is the news anchor. I think it works best if this character is more realistic than the character in the "news" footage (the person being arrested in this example). This is because if the "news" footage is more realistic than the anchor, it tends disrupt the viewer's suspension of disbelief; it makes the main character--the news anchor--seem fake in contrast to the news footage.

OK. this got long. Hope it helps!