Today we released the scenario block for Rise 360, and we think you’re going to love it.

Now you can easily add branching scenarios featuring Content Library 360 characters to Rise 360 projects. Just drop dialogue, responses, and feedback into a scenario block to walk learners through choices and their consequences. And because it’s Rise 360, your scenario will look stunning on any device.

Learn more about working with the scenario block and explore an example in Trina’s article. We can’t wait to see what you create with this new block type!

I just wanted to let you know that we fixed the issue where characters' expressions would revert back to neutral.

Let me know if you have any other questions.

Is there a way to remove the characters all together and only display a background image?

In the meantime, if there’s anything else I can do to help, please let me know!

we are diving into this exciting new feature and would have one follow-up question:

is there a way/option to make the 'continue' button disappear after each answer?

I think it would be great to avoid an extra click in each question.
I tried to erase the label 'continue' from the settings but it did not bear any difference in the interface.

Thanks in advance for your attention!

Apologies if this has already been asked and answered but... is there/will there be a way to report on the responses selected in the new scenario blocks?

Learners will always see the Continue button after making a selection in dialogue content. I'll let our team know you'd like to be able to turn off that button – thanks for the idea! 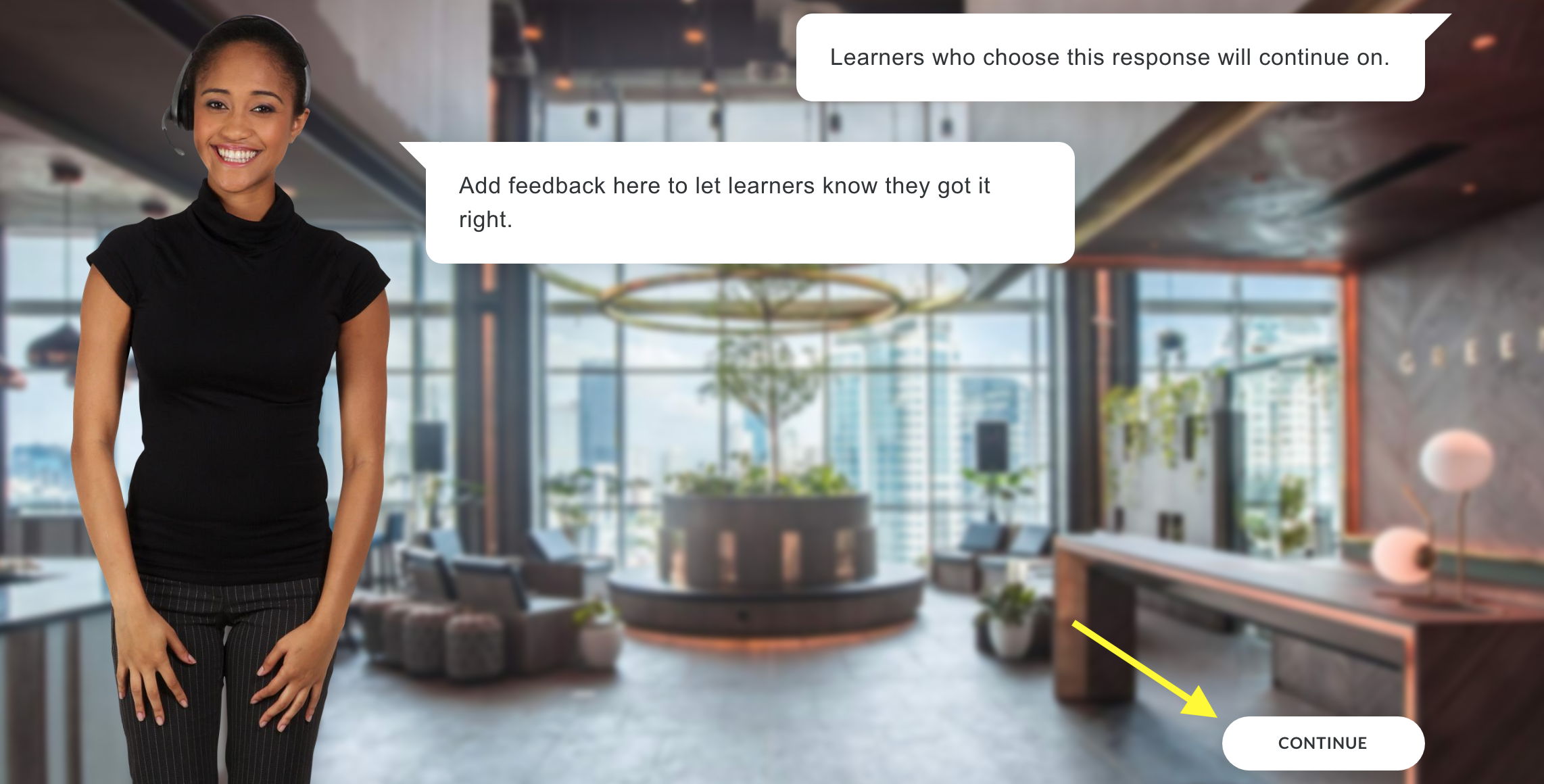 Rise 360 quiz data will be sent to the learning management system, but there isn't a way to report on Scenario Block data. This interactive block type is designed for lean-forward learning moments, like a knowledge check.

I'll submit that idea as a feature request for you!

Would also love the feature to add your own characters to be looked in to.

We have our own branded illustrated characters, which would be great if we could use these in the scenario blocks.

Until then, we'll refrain from using this feature, as the character sets don't fit our purpose or align with our style.

Could a feedback be a small video?

Is it so, the user could type in her/his name in the beginning, and that would be taking in the feed back?  (Thats right Henrik. You are in control)

Unfortunately, that’s not currently possible. If you have time to log a feature request and tell us more about your specific needs, that would be super helpful!

Let me know if there’s anything else I can help you with.

I am having an issue where the emotes I set for the character based on responses are not being displayed. Am I missing something?

Thank you for your tips in using this new feature. Is there a way to add your own images/props to a scenario? I would like to create a scenario in which the main character discusses several different tools, but I need to include images of these tools in order for it to be effective.

Select the scene you want to modify, then click Edit Background in the main window.

Tell me more about what's happening with the characters in your scenario block. What expression did you select?

If you'd like extra eyes on this, our stellar Support Team is here to help!

Hmmm, that's a great idea. I will give it a try. Thanks!

Yikes.  It blurred the background when I imported it as a background ...

It sounds like you need the ability to turn off that background blur. I'll pass along that idea to our team!

Is there a way to add audio?

Hi Bridget! There's not a way to add media to the scenario block, but we can track that as a feature request. Thanks for asking.

I was excited to try and use Rise for the first time, however I need to be able to add audio and my own characters to the branching scenario and discovered this isn't possible.  We wanted to build out some scenarios where the learner listened to a piece of a phone call and then had to choose how to react to what was said. I see this isn't possible at the moment in Rise, so back to Lectora I will go where I can do this.  Hoping even more functionality is added to Rise because I would really like to use this at some point to liven up my trainings and make them look fresh. I know I could probably do this in Storyline but would love to use Rise to learn something new for myself and my learners' benefit.  Thanks,

Hi there, Melissa. Thanks for sharing your needs! If the scenario block doesn't quite fit your needs, have a look at creating branched scenarios with button blocks. You can stack text, multimedia and button blocks together for a more customized experience.

If there's anything else I can answer, please let me know.

I am excited to try the scenario blocks in Rise. For a recent course on conducting interviews, I want to include a way for learners to practice interviewing skills. Here's my Rise example. Would love some feedback. Help Jacob Interview

And for more inspiration on interview scenarios in Rise 360, check out the last lesson in this course by our Community Manager, Nicole Legault!

Thank you, Alyssa. Nicole's example was my inspiration. I was hoping she might provide her source files as a template.

Hi Enid! I've sent you a copy of it. You should see it in your Rise 360 dashboard. Thanks!