Slide layers allow you to display additional content on a slide at certain points in your course or in response to the way your learners interact with your content. Once you've added layers to a slide, you can create triggers that tell Storyline when you want a specific layer to be revealed.

Go to the slide where you want to insert a layer. Then do either of the following:

The new layer appears in the Slide Layers panel, like this: 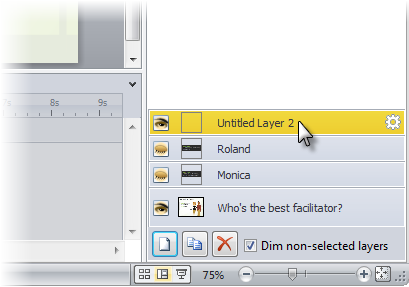 You can add as many layers to your slide as you like.

Once you add a slide layer, you can insert content on it just like you can on the slide's base layer. You can also manage the timing and duration of any object on your layer by using the layer's timeline. Just select the layer from the Layers Panel and then click the Timeline tab in the Timeline, States, and Notes panel.

It's always a good idea to name your slide layers, because this allows you to more easily select the right layer when you're creating triggers. To rename a slide layer:

For each slide layer, you can customize its properties to control its behavior. Click the small gear icon to the right of the layer's name to access the Slide Layer Properties window:

The Slide Layer Properties window appears, where you can choose your options: 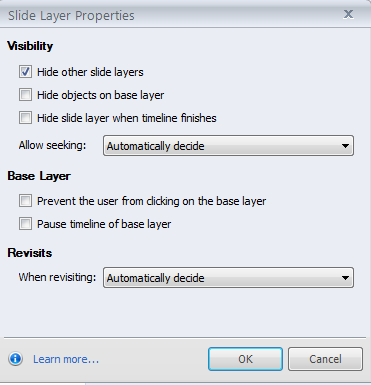 These options let you control how the objects on your layers behave if learners revisit the layer.

Hiding Specific Objects on the Base Layer

The layer properties described above provide an option to "hide objects on base layer." But that option hides everything on the base layer. What if you only want to hide some of the base-layer objects? You can do that, since each slide layer has its own timeline, where you can turn off any objects that would otherwise appear on the base layer.

Just go to any slide layer and click the Timeline tab below the slide workspace. Click the arrow next to Base Layer Objects. Then use the eye icon to turn off the visibility of any base-layer objects you choose: 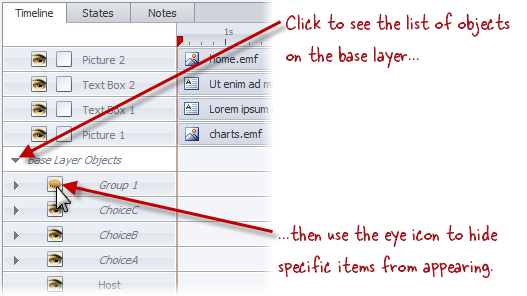 When users visit this layer, they won't see any base-layer objects you've hidden. Once they leave the layer, the objects will reappear.

You can apply transitions to your layers just like you can on the slide's base layer. To apply a transition, do this:

For more on transitions, see this tutorial.

To change the order of your layers, just drag and drop them where you want them in the Slide Layers panel.

Layers display on top of the base layer (not behind it), and they'll open in the order in which they're triggered, regardless of their stacking order in the Slide Layers panel.

Tip: To show more than one layer at the same time in your published output, click the gear icon for each layer to open its properties, then uncheck the box to Hide other slide layers.

When you have multiple layers on a slide, you may find it useful to display or hide some of them while you‘re editing your slide. To display a layer, click the eye icon that appears to the left of the layer title in the Slide Layers panel. To make it visible again, click the eye icon again.

By default, all layers except the one you're currently working on will display as dimmed. If you'd rather see them in full color, unmark the box called Dim non-selected layers in the Slide Layers panel. 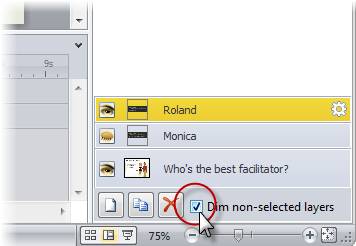 You can duplicate any layer by selecting it and clicking the Duplicate button or by pressing Ctrl+D on your keyboard. 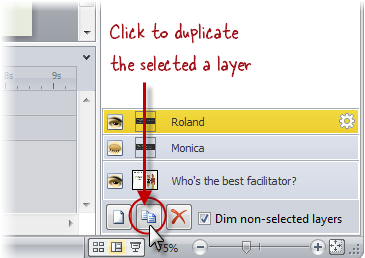 You can remove a slide layer by selecting it from the Layers Panel and clicking the red X or pressing the Delete key on your keyboard. 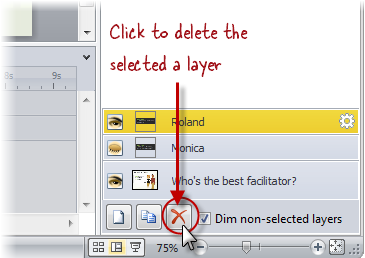