In this series of tutorials we'll practice using the states, layers, and triggers that we discussed earlier.

We’ll assume this is a customer call center interaction where a customer calls to report an issue. The employee has to make a decision. One choice will be positive and the other will be negative.

The practice slide already has some content in it. There's a customer and a situation that requires a decision. We’ll add an employee and create a simple interaction where we provide feedback by changing the character’s expression and showing new slide layers. 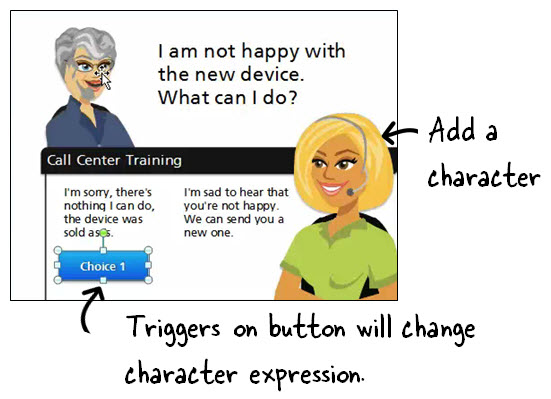 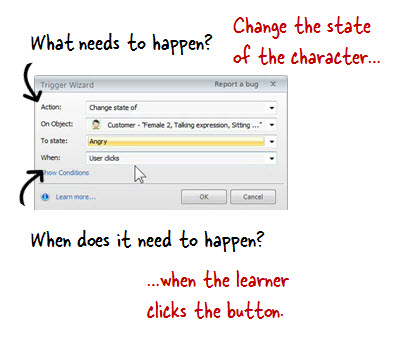 You built your first simple interaction! Now let’s add a trigger to change the call center employee’s expression, too.

There you have it. In just a few simple steps you built a quick elearning interaction. We’re going to build on that in the next tutorial. Make sure to save the changes on the slide so we can use them for the next tutorial.

In the previous tutorial, we added feedback using state changes and triggers. In this tutorial, we’ll add feedback to the interactive scenario with Slide Layers.

Let’s review what we’ve done so far. We created a Choice 1 button that when clicked changes the expressions of the customer and employee. This is a great way to provide some visual feedback in your courses. Now we’re going to add a feedback Slide Layer to the button. And then we’ll add another button for Choice 2.

In just a few clicks you created an interactive decision-making scenario using Storyline’s States, Layers, and Triggers. And that’s the essence of creating interactive content in Storyline. Of course, there’s a lot more that you can do but at this point it's just a matter of practicing the basics and then building from there.

Here’s a good practice exercise: how would you build a tabs interaction like the image below? Each tab should reveal a different layer. Give it a try. 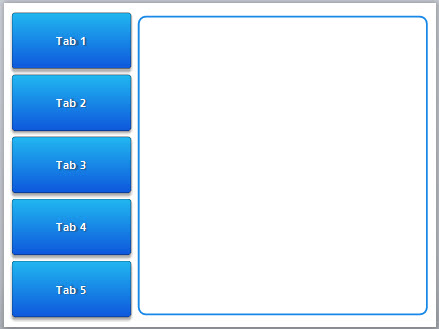 In the next tutorial, we’ll take a quick look at the interactive markers and learn how easy it is to add them to your slides.

Getting Started with Articulate Storyline 1

Tom Kuhlmann
Chief Learning Architect
This site uses cookies. By continuing to browse the site you consent to the use of cookies. Learn more here