Introduction to Animating in PowerPoint

Animation is a great technique for creating focus and emphasis in your courses. You can apply animations to text, graphics and images and you can apply multiple animation types to a single object.

Common uses for e-learning animations include: 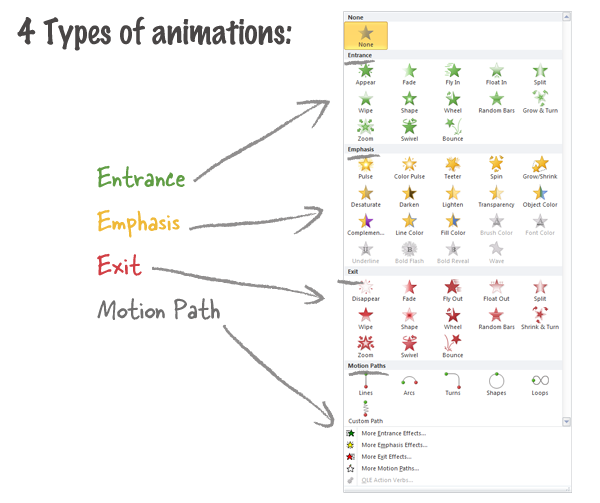 If you've worked with animations in PowerPoint, then you know how easy it is to apply one or more animations to objects. The workflow for animating in Presenter, is almost the same:

NOTE: I see a lot of new users add their animations and then move into PowerPoint's timeline to begin adjusting timing. You'll never use PowerPoint to adjust timings of your animations - only the order in which the animations appear.

There are three techniques for applying animations in PowerPoint:

Setting up your workspace

One of the first things I'll do before animating objects is bring up the Animation Pane. Its not necessary for applying animations, but it sure makes adding and managing animations easier.

So that's pretty much all there is to know about animations except for how to actually apply them. And creating and applying animations is what you'll learn in the next lesson!

How Do I Create My First Course?

How to Transform a Course with Timing and Animations

How do I remove animation from storyline that was converted from a powerpoint?
Sign In to Comment
This site uses cookies. By continuing to browse the site you consent to the use of cookies. Learn more here
REMINDER: Adobe is ending its support of Adobe Flash on December 31, 2020. Republish any Flash projects to HTML5 before December 31, 2020, so they continue to work. Learn more