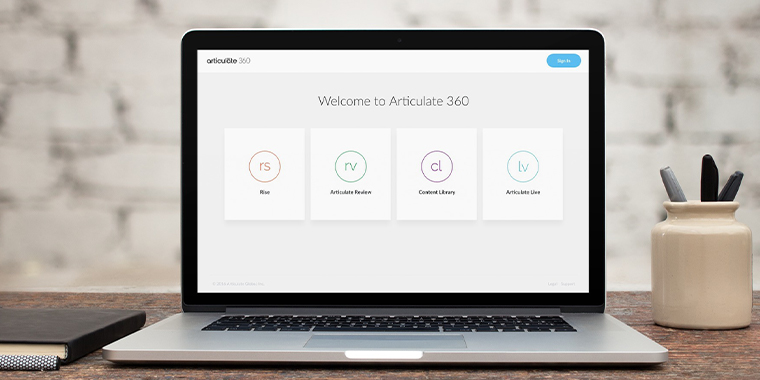 If there’s anything that course developers, subject matter experts, and training stakeholders all agree on, it’s this: the e-learning course development process could be a whole lot simpler.

With Articulate 360, you’ve got an assortment of easy-to-use tools that will power up your process. Articulate 360 will help you source assets, author content, and collaborate effectively with everyone on your team.

When it comes to e-learning authoring, your aims aren’t the same for every project. Sometimes you might focus on getting something created quickly. In other cases you might set out to create something media-rich and interactive. The nice thing about Articulate 360 is that you have a wide array of authoring tools. Having the right kind of the tool for the job will save you so much time.

With Articulate 360, you don’t have to choose only one authoring app. You get all the content creation tools you need for e-learning:

2. Save Time with Built-Out Templates

Often when a rush project gets dropped in your lap, it ends up looking like a rush project. Whenever timelines get tight, the first thing that seems to go out the window is visual design.

But now, with Content Library 360, you don’t need to make visual design sacrifices. That’s because Content Library 360 templates are professionally designed to be sleek and effective, all while being super easy to use. Simply pick the layout that works best for your subject matter and audience and then import the templates into your Storyline 360 or Studio 360 project. The interactions are already pre-built, so you can just drop your content into the placeholders and you’re ready to rock n’ roll!

One more bonus: Content Library 360 designs come with helpful prompts in the text placeholder fields to give you design pointers and concrete ideas for making the most of each time-saving template. 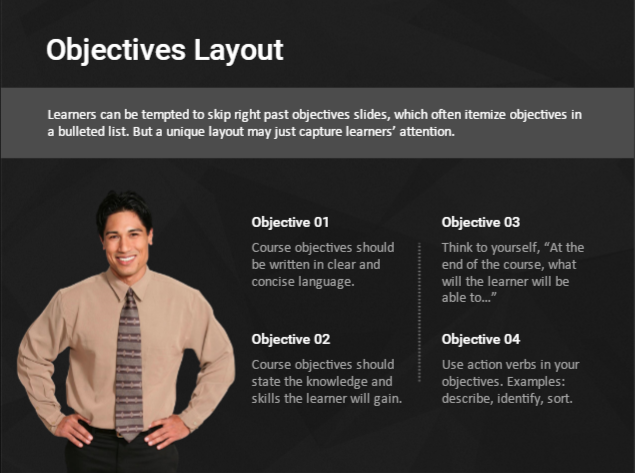 This practical advice will help you improve your design skills as you develop your course.

For more time-saving tips and ideas on working with Content Library 360 templates, be sure to check out this handy how-to tutorial.

Most e-learning review tools are clunky. They rely on your reviewers grabbing screenshots and accurately cross-referencing their feedback. Reviewers are busy people, which means that the traditional multi-step, spreadsheet-and-screenshot review process rarely results in very timely, clear, or actionable feedback. Instead, reviewers use the spreadsheet to contradict or debate with each other, leaving you in the middle trying to sort out what actually needs changing.

We’re super excited about the way Articulate Review accelerates the course creation process and we know you’ll find all-new, clever ways to use it in your role. For more pointers on how to streamline your review process, check out these resources:

We all know that video is one of the most effective ways to engage learners, but the tools for capturing and editing video are surprisingly complicated and time-consuming to use.

First up, Peek 360. Peek 360 is just what you need to capture quick screencasts on your Mac or PC. It’s simple, fast screencasting at its best.

And the best part is that you can use your videos independently or easily add them to courses you create with Rise 360, Storyline 360, and Studio 360.

We Hope You Love Articulate 360

We think Articulate 360 is an e-learning game changer. How do you see Articulate 360 changing your course creation process? Share your ideas and feedback with us by leaving us a comment below. And if you haven’t tried Articulate 360 yet, you can snag a free 30-day trial right here.

Getting Started with Articulate 360

Get Up to Speed on Articulate 360: What’s Included?