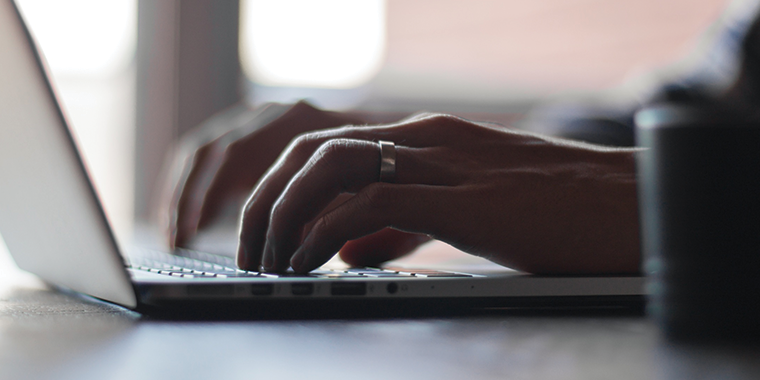 Triggers are a really important feature in Articulate Storyline. Why? Because nothing—and I do mean nothing!—can happen without a trigger. Triggers are how you add interactivity to your course, whether it’s jumping to a new slide or revealing new content. Let’s take an in-depth look at triggers and what you need to know about them.

Get to Know the Triggers Panel

First, it’s important to be familiar with the triggers panel. It’s a dockable panel located in the top right-hand side of the Storyline application.

You’ll notice a row of buttons at the top of the triggers panel; from left to right, these buttons allow you to:

There are four types of  triggers, all listed in the triggers panel directly below the icons. 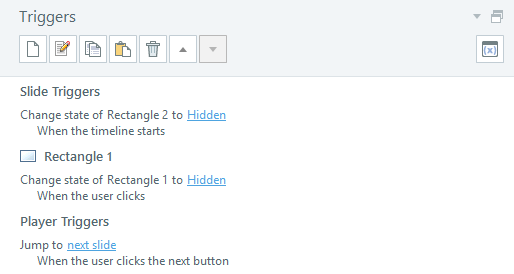 You can have an unlimited amount of slide, layer, and object triggers. 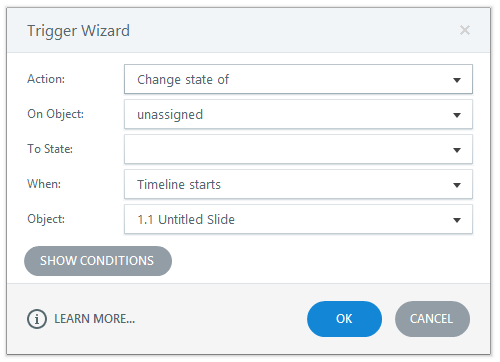 The two fields that will always appear in the Trigger Wizard, however, are: Action and When.

There are over 20 actions to choose from with Storyline 2. They are all fairly self-explanatory and clearly named. Keep in mind, additional drop-down menus will appear depending on which action you select. For example, if you select “Change state of,” the next drop-down will ask you on which object you want to change the state. If you select “Play media” instead, a drop-down menu will appear that lists the media options available on the slide, among other things. 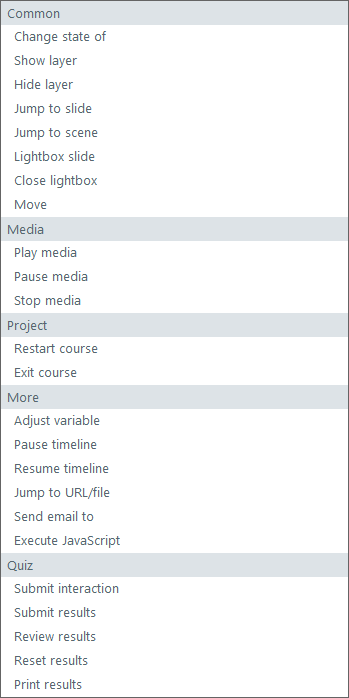 Once you’ve sorted out the action you want the trigger to do, you’ll be asked to choose when you want that action to happen. Again, you’re presented with a simple drop-down menu that lists all possible events for when. 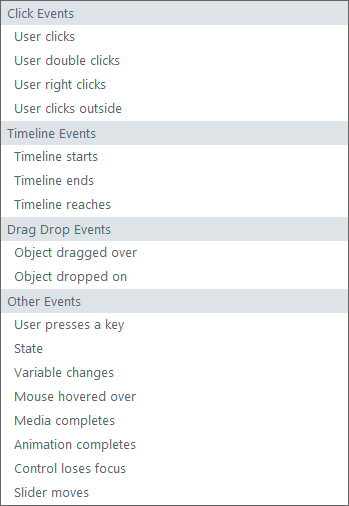 Which drop-down menu appears next depends on your selection in the “When” field. So the two most important things you need to remember are: the Action (what happens?) and the When (when does the action happen?). Everything else in the Trigger Wizard is adjusted according to your input.

You might also notice a button that says “Show Conditions.” This is a super-important and very powerful feature of triggers: conditions.

Why is this so powerful? Because it gives you the power to say a certain interactivity or action will occur ONLY IF something else in the course has occurred. You can also use the “And/Or” option to add multiple layers to your conditional actions.

For example, you could set up a button that will jump to another slide ONLY IF a certain shape has been clicked OR the entire timeline has been viewed. The possibilities and combinations are really endless when it comes to conditional interactivity. 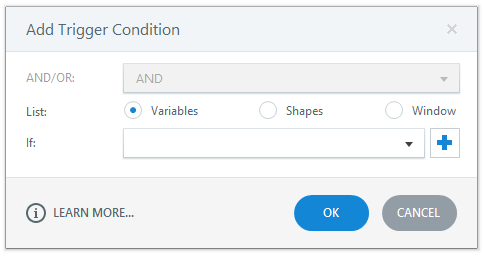 Storyline slides and certain objects already have triggers associated with them by default. Let’s take a closer look at these.

The quizzing slides, on the other hand, have a Submit button by default instead of a Prev and Next button. The Submit button has a trigger attached to it that submits the interaction when the button is clicked.

The Graded Results slide has all kinds of triggers already set up for you. The triggers will automatically show either the Failure or the Success layer depending on the final score you’ve set, and whether the learner has exceeded that score. The triggers do all the dirty work and calculations behind the scenes for you. There’s also a Review button set up by default, with a default trigger attached to it that allows learners to review the quizzing slides. 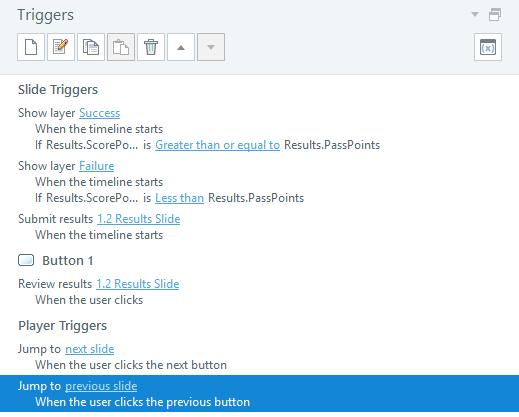 Of course, even though these triggers are all created for you and are there by default, you can edit or delete them to customize your player navigation and your course.

In addition to slides already having default player triggers attached to them, you’ll notice that some interactive objects (buttons, hotspots, and data entry fields) already have a blank trigger associated with them in the triggers panel. 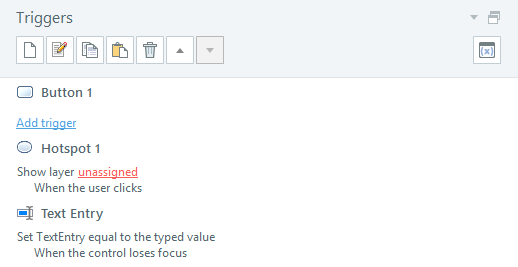 Why? Because, if you create a button or hotspot or data entry field, you NEED to add a trigger in order for it to work. To remind you of that, the trigger is automatically added to the triggers panel; you just need to adjust the details.

Another important tip to keep in mind when it comes to triggers: order matters! If there are triggers on the master slide and content slides, the master slide triggers execute first. Additionally, if there are multiple triggers on the same object that are triggered by the same action (such as “On click”), the triggers execute in the same order in which they appear in the triggers panel. If you’re troubleshooting a slide with several triggers and something is just not working correctly, don’t forget to take a closer look at your trigger order, as that is often the culprit!

Hopefully this in-depth article about triggers gives you a deeper understanding of how they work. They are, after all, one of the most powerful features of Storyline, and are necessary to build any type of interactivity!

Do you have any tips of your own about using triggers? Leave them in the comments below, or give me a shout-out on Twitter!

Tom you have been a blessing with the last New Hire template. The graphics are amazing thanks for making all of this available. Wow! What a community! I really get the triggers now. Thanks also Nicole for this great and well explained article.

You're welcome and thanks for the kind words.

I have 40 scenes with each teaching the delegate a different part of our system. while some scenes are 50 slides long others are only 5. I have the exercise details for each slide appearing as a layer which can slide into view and out of view by pressing one button. Is their anyway to have these layers and the triggers associated to them appear of every slide by default when the try mode section is created or do I have to add them all one by one! I'm aware I can add slides to the master slide slide however these cannot be edited and also need to ensure any images associated to this on the master slide does not appear behind the try mode image. (which is a bit of a pain and not as clean cut as what I am wanting to achieve.)

Hi! I have an issue with the replay button in the slides particularly which consists videos. After viewing the video in a full screen mode (lightbox slide), when clicked on replay icon, i am unable to replay the slide again if the video is played in normal mode. Is there anyway to fix this issue. Many Thanks in advance. Regards Sandeep Gadam

Another thing to watch out for (related to trigger order), is triggers that move you away from a slide. For example, if you have these triggers on the same object (a Next button, for example): 1- jump to next slide 2- adjust PageNumber, add 1 You'll jump to the next slide, but the page number won't change (because the second trigger won't execute as you'll no longer be on the slide where the trigger is). In other words, any trigger that changes your slide should be the last in its set.

Good tip, Simon! Thanks for sharing your feedback. You may also be interested in this article about how to troubleshoot advanced Storyline interaction, where I do discuss a bit more the importance of trigger order: https://community.articulate.com/articles/troubleshooting-advanced-interactions And there's also recently been this interesting discussion in the community about the same topic, if you want to join in! :) https://community.articulate.com/discussions/building-better-courses/how-do-you-troubleshoot-advanced-storyline-interactions Hope these links are helpful - and thanks again for passing along your tip!!
Sign In to Comment
This site uses cookies. By continuing to browse the site you consent to the use of cookies. Learn more here