Adding or Sum of Variables. Possible?

I'm making a simulation type game in storyline which has branching to different paths based on 3 different choices.

I made a variable called "Money from Company A", and i want this to be updated based on a given choice.

So let's say for simplicity:

If we have 5 questions in total, the maximum score should be 50$, and the minimum 5$, with a bunch of other possibilties.

The problem i was encountering was when a user is on the screen, and selects choice 1 then changes their mind to choice 2, the triggers i have set still add the points up. So a user can get more than 10$ on a question if they keep switching between choice 1 and choice 2.

I overcame this by making the variable change only when the user clicks the "submit" button at the end, so they have left the slide, and cannot change their answer.

All good up until this point.

But I was wondering whether or not I could calculate the sum of different variables, if I decided to add another company into my scenario? So in the results slide, I could show a total of the money earned from the two companies.

is there a function that could do %Money from A% + %Money from B% ? Or Sum(Variable1, Variable2)?

The only solution I have now, is to display the two variables in the results slide, and have the person add it up manually.

You can add it up using triggers, sometimes helps to have an intermediary variable.

You will need more than one trigger to do this

So,do I do it like it is below? Add Money to Money 2 when the timeline starts?

But then i can't show the original "Money" amount in the slide.

Can you show me how to do an intermediary variable?

Ideally, I'd like to be able to show on the reuslts slide: 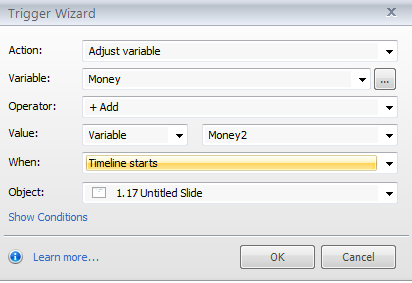 This shows how to add variables together, this way you dont destroy any oft the values

You really are a super hero!

Exactly what I needed.

Hi Gustaf! Glad you were able to find assistance in this thread. thanks for sharing

Can you add to the feature list for the next revision of storyline, the ability to add variables together like this: resultNum==variable1+variable2

The current method is tedious.

You are welcome to share any feature requests via this link :)

Thanks guys and girls, I've found this post very helpful!

Hi Phil. Many thanks for this fab piece of tutorial on how to add variables together. You  have saved me lots of time and frustration.

Glad that this older post was able to assist you as well Mimi :) Thanks for popping in to share.

Thank you, Phil, your example file was such a time saver!

Glad this was able to assist you as well Jorg :) Thanks for popping in to share.

You can add two or more variables by using javascript. I made a sample here.

As  DANIEL said, it's tedious!

Your javascript doesn't add variables, but just put them close together (1+2=12).

Adding variables feature should be essential.

This discussion is a bit older, and Javascript isn't something I can help with - but can you share a bit more about what you'd like to see for variable features I'd love to get those ideas in the hands of our product team!

I sorta done a work around for this, I made a bar where it totals up your drinks. http://www.alcoholandyouni.com/unitchecker/story_html5.html I used the scores from the variables to change another text box with the score?   It even can connect to a database with your results. I'm actually making another tonight and looked here to see if there is a better way?

Hi Phil. after 7 years, your post saved my day! Thanks!

Exactly what I was looking for. Thanks a lot Phil!