Change state on hotspot only when returning from new scene

I have hotspot triggers set up on 7 objects on a main slide of my Storyline 1 course. When the user clicks on a hotspot, they go to the corresponding scene. When the scene finishes, there is a button to return to the main slide so they can click another object.

I have also set up a 'Visited' state on each hotspot so when they return to the main slide, they know which objects they still need to click on.

However, when the user clicks on the hotspot, before they jump away to the new scene, the Visited state of the hotspot appears. It's only for a split second, and some users don't even notice, but it's 'inelegant.' I would like the state to change each time they return to that main slide from another scene, not before. Oddly, the only object where that doesn't happen is the hotspot trigger that comes first on the timeline (it's alpha order so it's the hotspot that starts with an 'A').

I've recreated the entire process in a test course with fewer slides in each scene and it works perfectly.  Grrrr.

Please provide advice. I'm not good at variables and have tried to fix this problem using them, but have not been successful. I would need step by step instructions if I needed to add variables.

The built-in visited state changes when the mouse comes up after clicking on it. The times you see it working are the times when it is able to show the destination before you register that the state has changed. Using custom states and variables may be the only way.

1. Create new state on the hotspot on the main menu. Name it "Changed" or something other than a built-in name.

2. Add a trigger to the button on the destination slide that the user clicks to return, BEFORE the trigger to jump to main menu. Set it to change variable (I use Variable1) to "true"

3. Add a trigger to the hotspot on the main menu. Set it to change state to "Changed" when the timeline starts with the condition that Variable1 = "true".

For each hotspot on the main menu, do the same, but use a different variable (Variable2, Variable3, etc.) Create the variables with an initial value of false or blank.

Hi, Betsy -- So sorry to hear you are having troubles, and it looks like Walt has outlined the steps you'd need to take to address the issue! If you should find that issues persist, you are absolutely welcome to share your file if you would like us to check it out. Please use the ADD ATTACHMENT button at the bottom of the reply box and browse from there! :)

I have been trying to implement these steps into my own course. However, no matter what different triggers or conditions i use there are various problems that keep happening.

2: when the user returns to the main menu slide, the button that was selected is not in its "completed" state, but the next button that they need to press is in a "normal" state which is only half of what i want.

Originally in making this course i was using lightboxes, but since im not able to adjust when the user can exit out of the lightbox this was my other option since i had already created new slides. If this issue cant be fixed is there another way I am able to create this and to possible avoid having to use a million different layers.

Thank you for sharing the .story file!

It's a little difficult to troubleshoot the project, since you've used different states (some had both a visited state and a visited1, while another had a completed state, but no visited one), triggers (as you mentioned, you tried both lightboxing and jumping to another slide) and you are using the same variable with all three buttons (Variable2).

So my first suggestion is to start from scratch, using simple shapes to create the logic. Once everything is set, you can replace the objects with the final images.

Make sure that for each menu icon, you create a separate True/False variable (default value = False).

That variable can then be switched to true when the user visits the related slide. Since on your initial slide, you'll have a trigger to change the state of the object to completed when the timeline starts, if the value of completed_one is true, it should only adjust it when the user returns to the main menu: 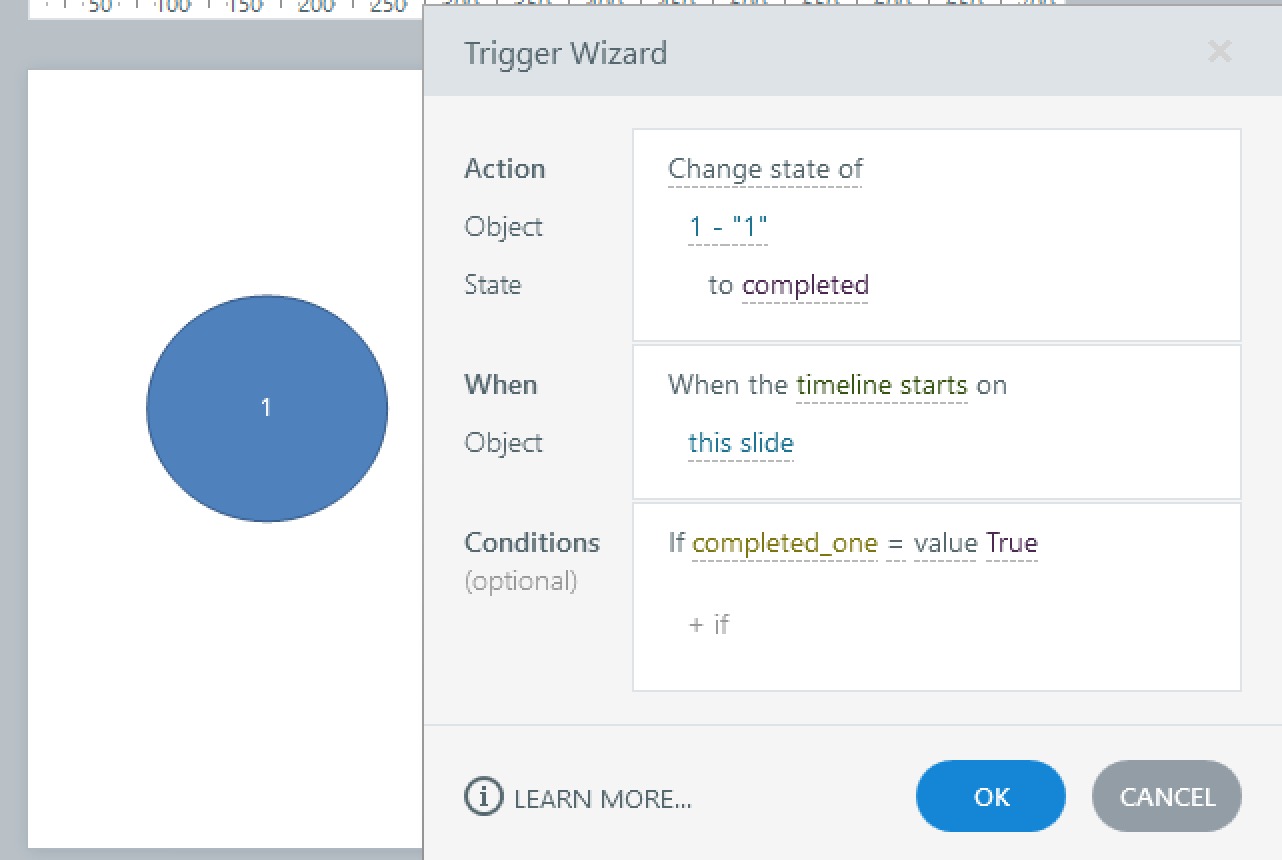 Let me know if this works!