Am working on Articulate Storyline 3, and am interested on having my courses appear as full screen. **See attached, is there a way to make that possible somehow?

For more on player size and browser settings, check out this handy guide.

Thanks Alyssa, I will try this out and give you an update.

If you open in a new window, will that trigger a pop-up warning if the user's browser has a higher security setting?

It definitely could show that pop-up warning, or a button to choose to launch it in a new window.

If you don't have to launch it in a new window, you can unselect that option in Storyline and it will launch in the existing window/tab that you are opening the link from.

Here's a full screen widget you can use: https://cluelabs.com/full-screen-mode-elearning-widget.html Probably too late for your original project, but maybe you'll find this useful for the future courses.

Thank you for this widget!! This works great!

Hi Guys, I followed the instructions and used this widget. It works only on alternate screens when the course is published. Did anyone else face this? I have also written to the Cluelabs support, but awaiting their reply.

I have a button that trigger this JS:

Thanks, Daniel. I need the course to start in full screen as soon it is launched, not on a click. Is there a way to achieve this?

Just run that code when the timeline starts...

Thanks, Matthew. I tried it, but it gives the same result - works on alternate screen, when published. What I have done is add this script to first slide in the the 'master slide' section - Executive javascript when timeline starts. When the course loads, it's not full screen. When I click next, it becomes full screen. And then, it repeats alternately.

I did some tests and i think that it's impossible to do, every time it become fullscreen after 2 or 3 seconds. Anyway i suggest you to put a button and let the user to choose the fullscreen or not for many reasons.

Thanks, Matthew. I tried it, but it gives the same result - works on alternate screen, when published. What I have done is add this script to first slide in the the 'master slide' section - Executive javascript when timeline starts. When the course loads, it's not full screen. When I click next, it becomes full screen. And then, it repeats alternately.

Sounds like it's working! That code is doing exactly what it should. The code means:

So, because this in on the slide master, it runs each time a new slide starts.

This could be fixed by only using the first part of the code:

This just makes things fullscreen. So it stops that alternating between fullscreen and unfullscreen. (Let's just pretend that's a word).

However, it still won't work.

Because you aren't allowed to do that.

It's a security thing.

Switching to fullscreen must be initiated by a user gesture.

This means (in the context of Storyline output), that once the user has clicked anywhere in a course, that is considered a user gesture.

So then the next time this code runs (i.e. when you go to a different slide), it'll be allowed to do its thing.

If you open up your JavaScript console, you'd see this message, which explains why the code requesting fullscreen stuff was ignored:

By the way, this whole "initiated by a user gesture" stuff crops up at other times as well.

So what's the best solution?

Let them choose if they want some of that good old fullscreen magic.

I probably should stop writing now.

But... if you really need to make the thing go fullscreen no matter what, then you could do something like this: demo | source.

Keep in mind that when resuming, users will see this screen: 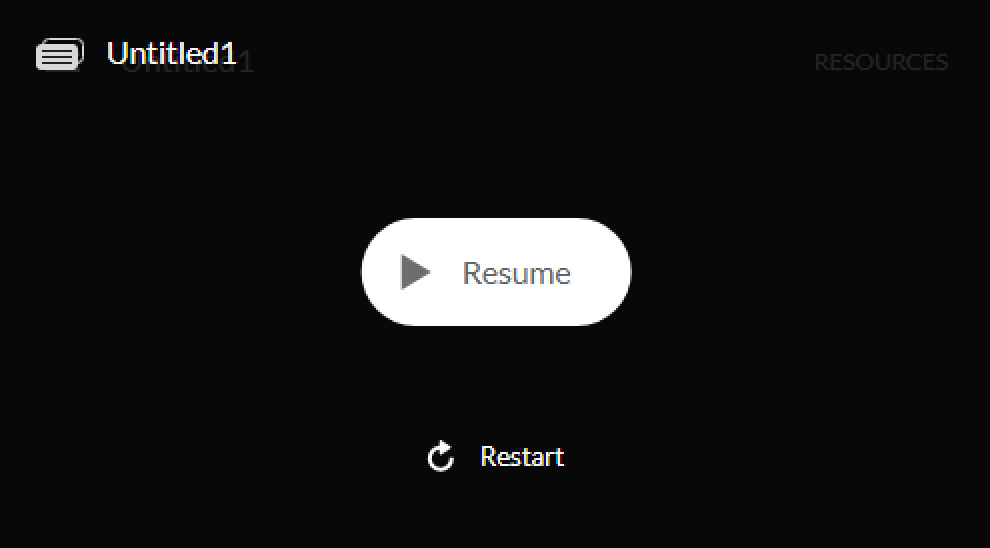 Selecting either resume or restart counts as a user gesture, so fullscreen stuff would happen once an option was chosen.

But you know what?

I still wouldn't do it.

Because the user can exit fullscreen mode at any time by pressing the ESC key.

Everyone knows this. Because it's what they do on YouTube.

So people are going to do that.

Then they are going to go to the next slide... and you know what's going to happen?

It's going to go fullscreen again.

That's not how you make friends.

Thanks, Matthew for the detailed explanation! Really appreciate it!

Hello ... I see many old discussions about full screen view ability, and believe this is most recently updated, so I am posting here. I am building courses using Storyline blocks in Rise 360, and I would like to allow the user to make the embedded video full screen. It seems odd that this is not an available toggle. Are there any updates on this becoming available?

No updates to share on the ability to have a full-screen option in Rise 360 from a storyline block, but I appreciate you sharing you'd like to see this as well.

We'll be sure to update you in this discussion once we have any news to share on this!

I would also like to see this as an option. Is it possible to edit the rise files to allow it?

Hi Michael! While we don't support modifying the published output, other folks in the community may be able to point you in the right direction.