User notes that they can print and email

Hi all. I built a course earlier this year that contains a "notes" function to allow users to take a moment to reflect and type their thoughts on certain questions. This is used in place of a typical multiple response/choice type question. Thought I'd share it here with you!

Here are the files:

Sorry Ronel, I accidently mixed jQuery with standard JavaScript. The code should be:

I made a short video to help explain/demo it: https://youtu.be/hskTmJgMTyc

I know the Articulate community's reputation for being helpful is something to be proud of but you Mr. Kingsley definitely proved that as an understatement. You even bothered to create a video tutorial for me :D Very grateful for this community and glad to inform you guys that my issue is solved 100%. THANK YOU.

Hmm.. bumped into another problem. How come when I add the highlighted lines, storyline does not trigger the email window to pop up anymore? I am using Outlook btw. But without those lines, the email window pop ups just fine. Any help? I attached the whole java script if you need to see it. Thanks! 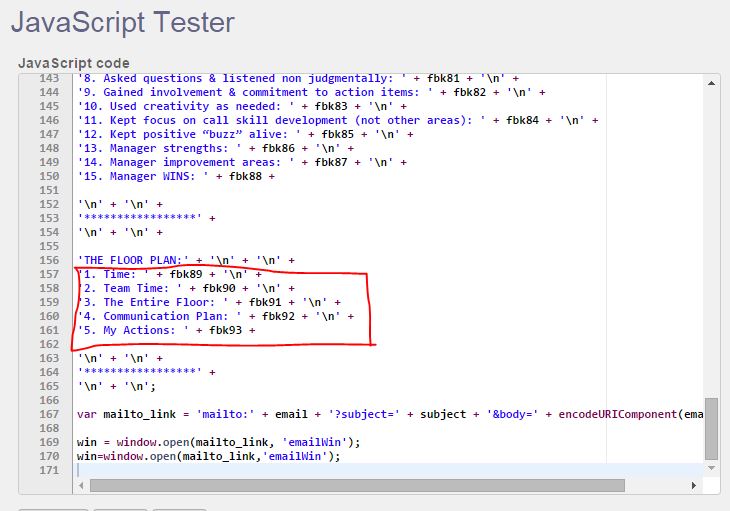 A few thoughts on this...

For something this complicated I might suggest you display the data in a new HTML page with options to print/save as pdf. Then they can email the PDF.

Hi Articulate Community, this is my first post. I know this thread started a while ago but it still seems active since the ability to email and print notes is so cool! Hopefully, someone can help me. I've attached a Storyline file which is a stripped down version of the functionality that Stephanie demoed.

When I click the email button and print button nothing happens. (I've published the file, not viewing in preview). I've also copied the Javascript for the email piece below in case that might be helpful.

I know this is an old post, but thanks so much for sharing, this has been a life saver as I need to print a report from the current package I'm working on, and this works perfectly.

Just a note: when I used the date I got 13rd rather than 13th, I've found a comment on the following post with code that works so it will do 1st, 2nd, 3rd but not 13rd, in case it's useful for anyone.

That's a great solution. I often use this JS library when I need to
display/manipulate time or dates.
https://momentjs.com/

I have a question that I really need your help with. I am wanting to do the exact same thing you did with sending notes to an email, but with what I am doing I am unsure of how to customize yours for what I am trying to do. Would I be able to possibly send you the storyline file of what I am doing and get some input of what I might do? Thanks so much for your post sharing

You could post your file here and seek feedback from the community. I'm not sure how often Stephanie looks at this thread.  Just use the "ADD ATTACHMENT" button when you post.

Absolutly love it!! was exactly what i was looking for and chalenged me to get to know a little java-script to remodel it. Thank u so much for sharing, Stephanie!

Ok, so here the file I was referencing earlier. I want to do the exact same thing Stefanie did, but have everything on this slide go to email. Having the recipient auto populate. If anyone could help with this I would really appreciate it!

Hi Owen, 3 years after your comment, im having the same problem. Did you find a solution?

I've commented in so many places on this thread...
Do you mean the print button functionality? If so, I believe you can find my solution on page 2 of the thread along with a .story file.

I don't know if this will be helpful, but I have a free Storyline 2 Print/Email Notes Template on my website, along with links to tutorials and resources on the subject.

Thanks for your reply! i used the print option, adjusted the java-script to fit my project.
One question. do you know how to ad a print-buton or an automatic function to open the print window??

Our workers ar not very used to work with computers, and i would help them to get the document printed.

In IE i can use the wright mouse button, but in firefox i cant find a way to print.

In Firefox, if the window that opens doesn't display the usual toolbar buttons or the ≡ Menu Button, you can simply hold down the Ctrl key and press P. This also works when you just want to print the selected text rather than the whole page.

Sorry, I don't have another solution.

thanks for the help! im going to look what i can find out.

In a different post (about html course certificates) I proposed a solution that builds your html print window with content from StoryLine and includes a print button on the page that is ignored by the printer. I think this process should work for you with user notes even in firefox. :-)
Link to post with code.

Thanks again for your help. im going to study the post you added and try to transelate it to my project.

This is exactly what I'm trying to do for a course, but I can't get the Java run! All the variables are working perfectly within my course, but when I click my Print button nothing happens.

I checked all my Storyline settings and they seem to match the file given in the original post, except I'm building in SL2 not 1. Help!!!

Great this community, it brings us a lot further in the development of eLearning.

The script for sending data to Outlook works fine. Unfortunately, the number of characters is limited which makes nothing happens when I click the email button. Does anyone have a solution?