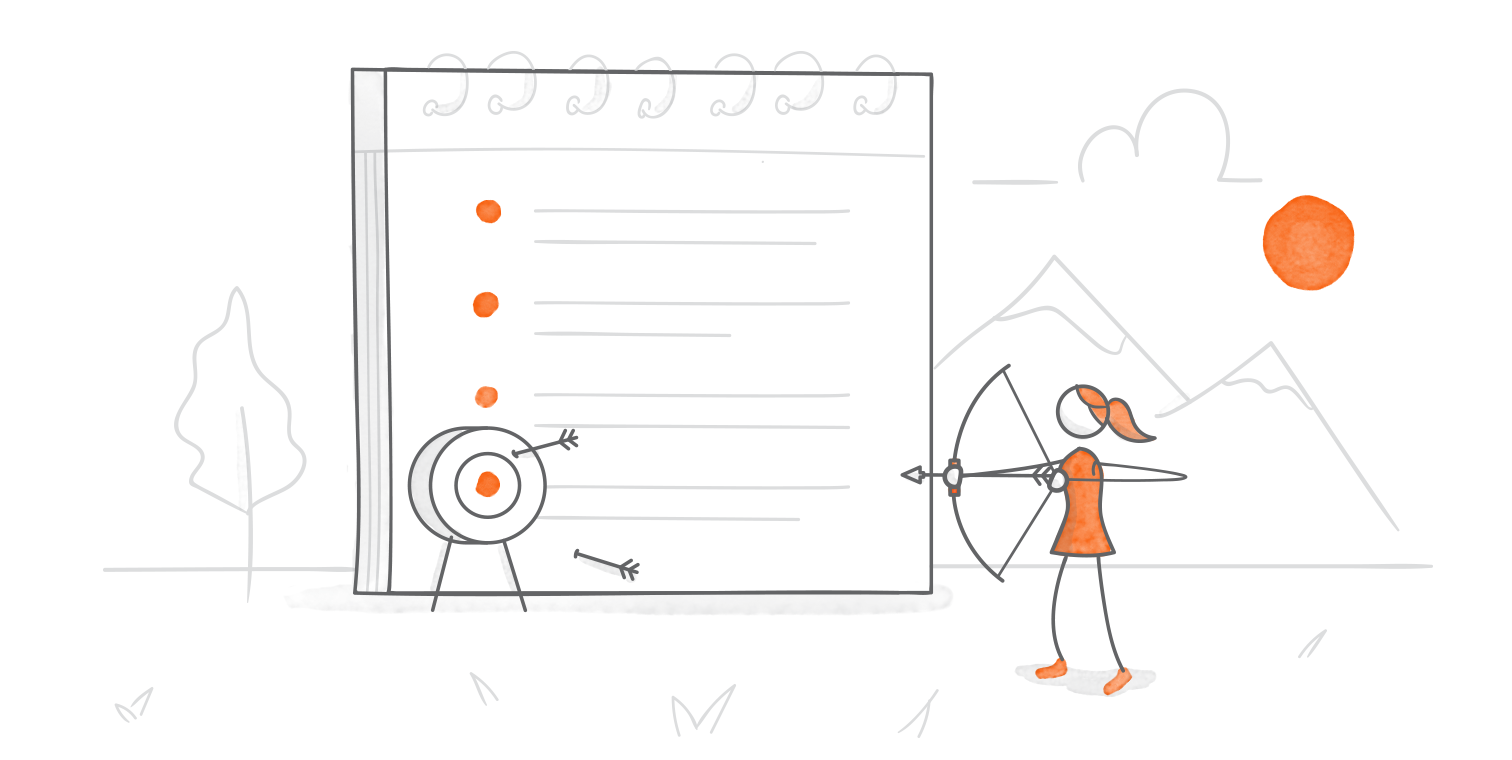 Bullet points. They’re one of the easiest ways to break up lots of content and highlight important information.

But the trade-off you make when you rely too heavily on bullet points in e-learning is a critical lack of learner engagement. After all, a slide full of bulleted text doesn’t really invite learners to think deeply, internalize the information you’re sharing, or interact with it— all activities that spark learning.

So, how do you go about reimagining bullet points into something more inviting and interactive? And what are some creative ideas for presenting content that’s better than bullets? Keep on reading for answers to both of those questions.

How to Reimagine Bullet Points

One mainstay of presentation design is the good ol’ 50/50 slide layout. You know the one I’m talking about … where half the slide is a bulleted text box, and the other half is an image—often decorative? That slide layout can work well for presentations because a presenter can give the audience some context for those bullet points.

But that same approach doesn’t work as well for an entire e-learning course. Screen after screen of bulleted text—no matter how compelling the audio narration or animations accompanying it—can be tedious and difficult for people to absorb and retain.

To break out of that pattern, start by reframing those bullet points. Here are two techniques to try:

With your bullet points organized, it’s time to start thinking about ways of using them as the foundation for a more interactive experience. Let’s take a look at five ideas for doing just that!

1. Use a Clickable Image

Clickable images are one of the easiest ways to leave bullet points behind and invite learners to interact. Instead of giving learners a bunch of bulleted text next to a static picture, isn’t it much more inviting to urge them to explore that image in detail?

See for yourself how much better that kind of learning experience can be with this super-cool example from Richard Hill, built with the labeled graphic block in Rise 360.

With the labeled graphic block in Rise 360, you can easily add an animated GIF and some markers full of all the helpful information and resources you want to share with learners.

That’s certainly more stimulating than a list of bullet points, don’t you think?

Another easy way to reimagine bullet points is as a tabbed interaction, as you can see in this brilliant and beautiful Storyline 360 download from Montse. 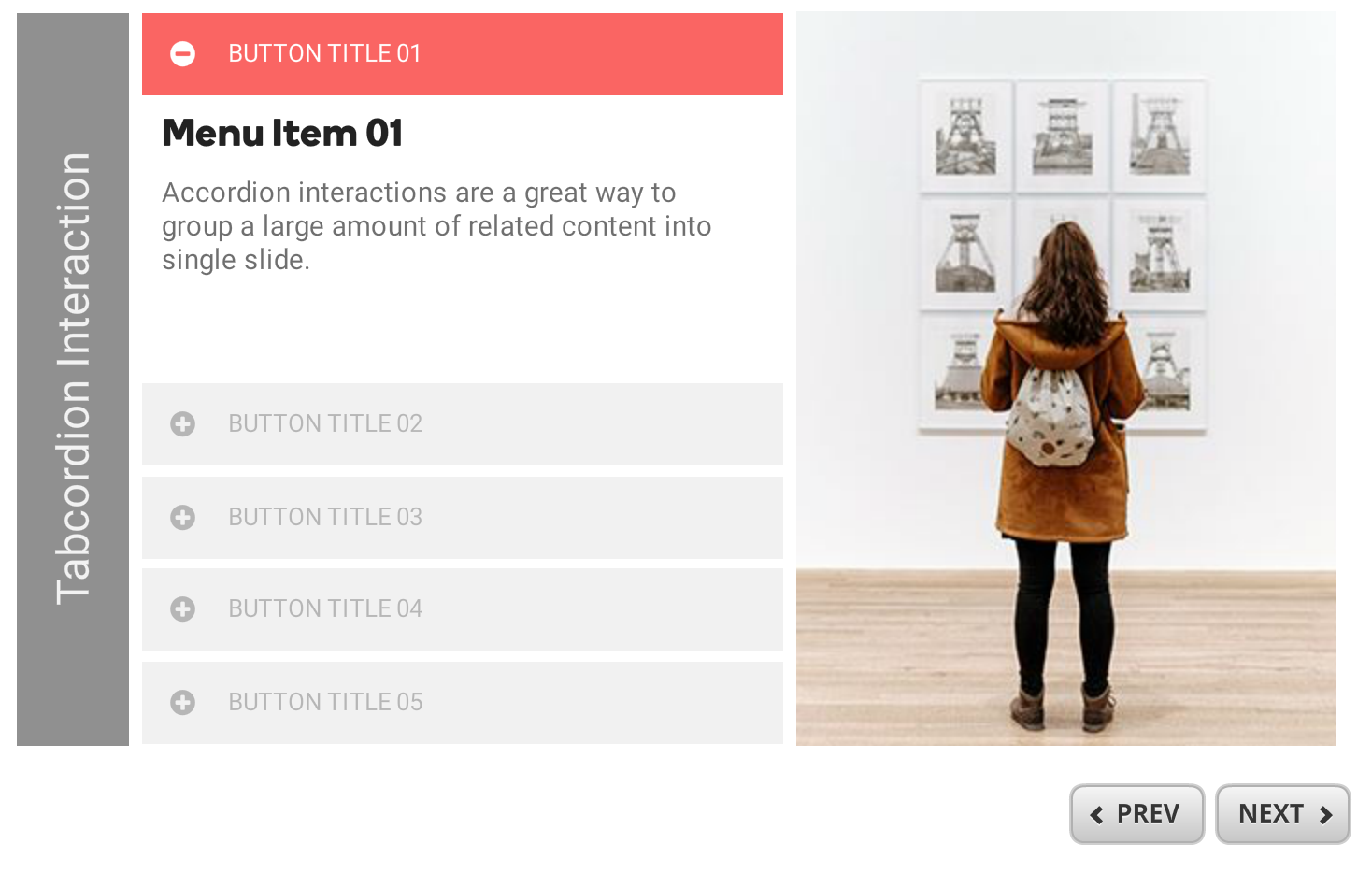 Creating a tabs interaction from a bulleted list is so easy to do. In Rise 360, just add an interactive tab block and pop in your content. Or, to quickly build a more custom tabbed interaction in Storyline 360, save some time and grab this free, easily customized Storyline 360 download.

Adding hotspots to a short video is another great way to turn passive bullets into a more active, engaging experience for learners. Check out this Storyline 360 download that features three ways you can use interactive video for some design inspiration. 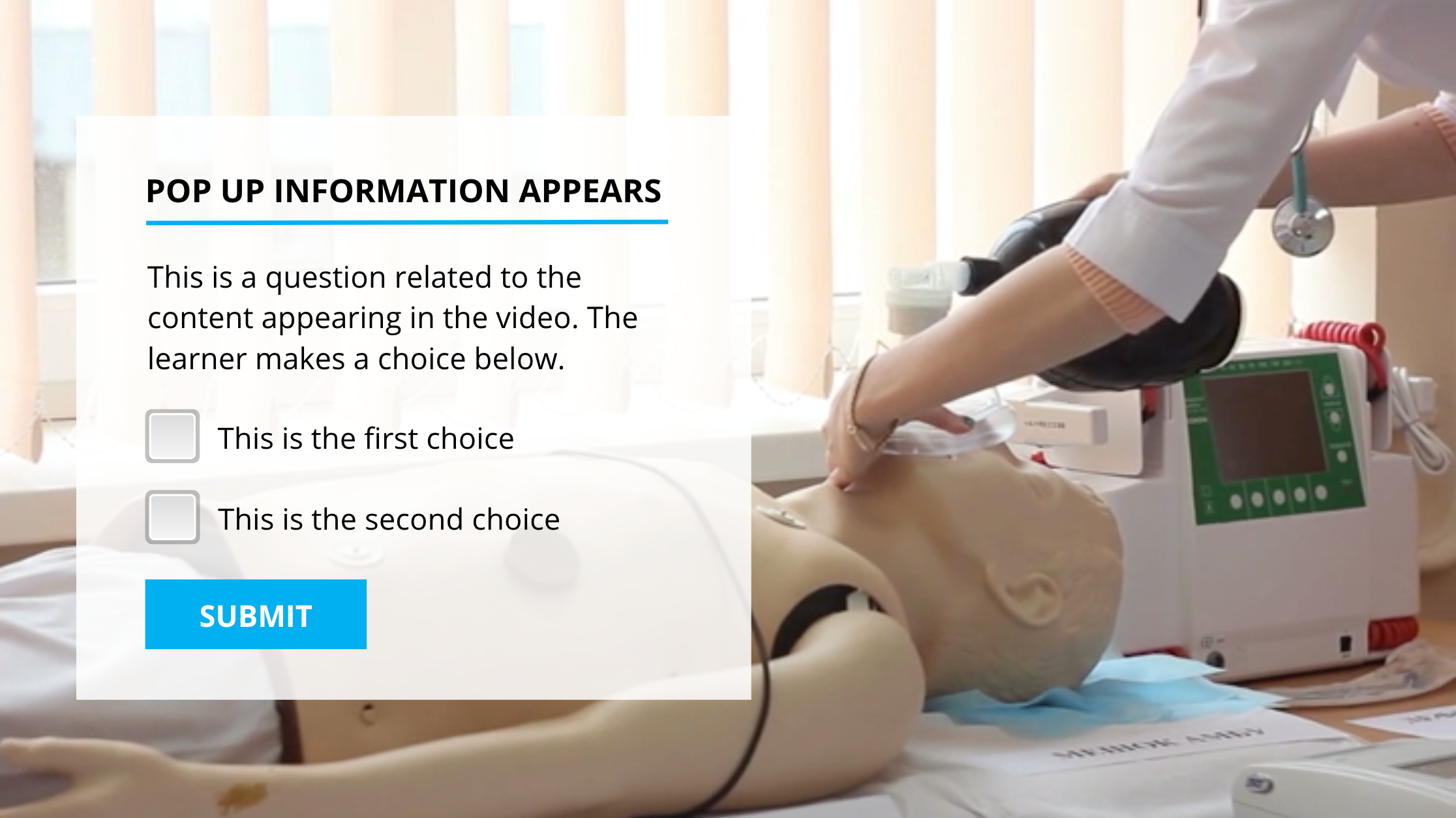 Think video is too expensive or time-consuming? Think again. With Content Library 360 videos—like the ones featured in the example above—right at your fingertips, you have countless creative options for using video in your projects.

Want to create your own video? Nowadays, almost anyone can shoot good quality instructional videos with the camera on their smartphone and edit them just as quickly using free or low-cost apps—or the built-in video editing feature in Storyline 360.

To learn more about creating your own images and video, check out the pointers in this article, 4 Tips for Taking Your Own Pictures for E-Learning.

One super-engaging way to rework static bullet points is to incorporate them into feedback for learners. Scenarios are a great way to give learners a chance to explore, practice, and learn through their choices—like in this Rise 360 example.

This project uses a scenario block to branch to different outcomes depending on the learner’s choices. It illustrates one way you can use scenarios to help learners practice their upselling skills. And it’s a whole lot more engaging than a lengthy list of do’s and don’ts.

Looking for some more inspiring examples of scenarios in action? Grab this handy Storyline 360 scenario template for prioritizing tasks or this Storyline 360 law enforcement-themed scenario starter to begin playing around with the possibilities.

With the 360° images feature in Storyline 360, you’ll find you have all sorts of clever new ways to share text content. Add your 360° image and some interactive markers that entice learners to explore and interact. Or give learners a guided tour experience with navigational nudges that help move them through the experience.

For some creative inspiration, check out one way you can combine audio, video, a scenario, AND 360° images in this brilliant, interactive storytelling example from Bianca Woods.

Ready to get started with building your own immersive 360° interaction? Dive into this super helpful article from Sarah Hodge for some pro tips.

What’s your favorite creative alternative to a bulleted list? Have an inspiring e-learning example to share? We’d love to see it! Leave me a comment below, or better yet, share your great ideas in our Building Better Courses forum.

If you think creating training in PowerPoint is easy, you’ll love Rise.com—the all-in-one system that makes online training easy to create, enjoyable to take, and simple to manage. Sign-up for a free trial to learn more, or leave us a comment.

Basic Elements of an E-Learning Course

Thank you, Trina, for sharing the information

So happy I followed a link to this article! I found two ideas to improve my project within minutes. Thanks!!

Love this article! It dramatically improved a training I was working on and I shared it with the rest of my team. Thank you!

Thank you, Nicole! There is no higher compliment than hearing one of my articles helped you and your team. Wishing you loads of success on your project!

Hi Trina, Can you share the/a template you used to create the radial image "bullets" in the first example? I don't think ppt smart art is the right way to go, but maybe it is?
Sign In to Comment
We have recently updated our Privacy Notice.