Can we change the color of a Storyline Character's outfit?

I really want to use this character from Storyline 360 but the blue blouse doesn't work well with my client's color palette. 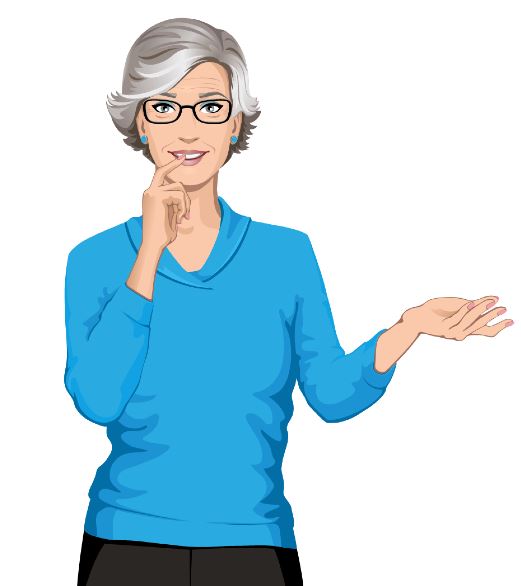 Does anybody know a trick to change the color?

You could right click on her, save as a picture, (I'm guessing you already did that step since you posted her here), and then import her into Gimp or Photoshop to change her shirt color. You might have to change a few colors,  to get the shading right.

Or you could just have your client buy all brand new blue uniforms for their employees. :)

There isn't a way to change the color of the outfits for characters in Articulate 360's Content Library, although you could use the workaround Laurel mentioned! It is a good idea though, and likely an easier feature to implement, so I'll share it with our team who manages that content!

During my testing of early releases of the Articulate 360 Suite, I wanted to see whether or not it would be possible to save the newer Storyline 360-specific Illustrated Speaking Characters to Windows Metafile Format (WMF).

In Storyline 2, it's possible to do this with the early v1/v2 Speaking Characters, so you can then re-insert them into Microsoft PowerPoint so they can be de-grouped and then customized to great effect.  Things like changing color details on clothing and other character features are extremely easy and do not take much time to accomplish once you get the hang of the process.

This process has no doubt been demonstrated numerous times by David Anderson and his Articulate colleagues during their many Articulate Roadshows (I learned about this while I was in Toronto's session, during the early summer of 2016).

The only caveat to this process is, once you complete your changes, the best you will be able to do is to re-save your finished speaking character as a static graphic image, such as a PNG, for example, for re-importing into Storyline 2 or 360.

These graphics function as Static Speaking Characters, which means you will NOT be able to change the Properties of the character like with a conventional fully-featured Speaking Character that Storyline typically employs, so things like Positioning, Poses, Expression Changes, etc. would be unavailable.

Unfortunately, despite the potential for things like high-resolution SVG support in 360 (?), there is no method I am aware of using the newer Speaking Characters that allows for this kind of customization, which means, as Laurel suggests, Photoshop may be the best way to go regarding those kinds of changes, which, unfortunately, would be more complex and time-consuming, but, at least, possible.

It's a shame, because it's this aspect that helps to make the stand-alone version of Storyline viable for our organization as a flexible product, and by extension, a business case.

It's good to read your confirmation on this. I've watched a few tutorials and tried to save the new characters as SVG and WMF, then tried to import them into PPT but with no success. I though I was doing something wrong.

I might just learn to do that in Photoshop or Gimp as Laurel suggested.

It's a free program that is very similar to Photoshop, although not quite as robust (since it's free).

This wasn't a major change in clothing color, but it helped to maintain the theme throughout the course, as Marilyn's original top was too bright a cyan. Powerpoint wouldn't let me ungroup, so I made the change in Photoshop pretty quickly.

1. Click 'Select' from the menu bar > color range, which opens a menu box.

2. Make sure the preview option at the bottom is at none, then use the eyedropper to select the article of clothing. I adjusted the fuzziness to about 120 to capture the high light and low light around the shirt edges. Click OK.

The most time-consuming part was adjusting the color to exactly what was needed using the sliders. Ideally, it would be possible to change to exact RBG or hex...maybe there is and I just haven't learned that yet.

Save as PNG then bring it into Storyline.

The more accurate way would be to use Replace Color.

Hit W to use the Wand Tool and select the shirt. You might need to Shft-Click to add darker parts, but once it's selected, you'll see the dancing ants.

After you've made the selection for the area that you want to replace, Click Image>Adjustments>Replace Color.

The whole shirt should be selected. Double-Click the color box above "Result", this will bring up the color selection window. You will be able to manually enter the RGB color if you want, which is what I suggest since it's the most accurate way to get the color you want.

Here's the important part - You'll notice that all the gradients have disappeared and there's now only a solid color. Above the Layers, you'll see Blending Modes (to the left of Opacity, it should default to "Normal"). Change it to Overlay or any of the other blend modes until you find the one you like. Voila! (I really hate Photoshop sometimes)