Anyone know which is correct?

We always use "eLearning"

The rationale goes like this:  small 'e' denotes electronic  (etc: web/online, basically not paper based).

Hence the approach to eLearning (the term is long in the tooth now) is mainly about Learning, 8 letters to 1.  The "e" about the delivery technology... which of course will always change...

I previously worked in educational institute that spent many hours debating the most suitable syntax of the word eLearning, E-learning or e-Learning....only educational facility would waste meetings on such a benign topic.

As the internet was starting up (yes that old)  - I also worked for a manager (same institution) who had monthly meetings for a year to the determine if the Internet was going to be a worthwhile education tool...........<rolling eyes>

Hi Jeff, I'd say it doesn't matter really as long as YOU use it consistently in anything you write. Like Garry states: in the end it's all about learning.

Hi Jeff, I'd say it doesn't matter really as long as YOU use it consistently in anything you write. Like Garry states: in the end it's all about learning.

I guess Oxford dictionary is the one to follow?

In my personal experience, it depends on the organization/company. I agree with Jeff that the most important thing is just to pick one and be consistent with it! =)

I agree with Jeff - no correct, or incorrect syntax here. as long as you stick with one.

Nevertheless, out of pure curiosity I searched for both terms and got the following (perhaps quite useless) info:

LOL That could very well be the case, Rutwin.

Ask yourself, do you write "email" or "e-mail"? Then do the same with "e(-)learning". Consistency is key to happiness

My friend who is a grammar stickler explained to me that with new hyphenated words (like e-learning), as the word becomes more commonplace and well-known/used, the hyphen is eventually dropped.

It's e-learning in Horton's "E-Learning by Design" and Clark's and Mayer's  "e-Learning and the Science of Instruction" (and E-Learning in headlines/section titles in each). That's the convention I use when I mention it.

I guess Oxford dictionary is the one to follow?

Until they decide to drop the dash like I believe what happened with email finally.

This discussion is quite curious for a non(hyphen)English(hyphen)speaking country like Spain.

We have additonal problems to this. Sometimes people would ask: "So what do you do for a living?" and I reply: "elearning". When I receive a deep silence, I continue: "you know, these computer online courses...". Then there are 2 options: I can get a "so you are a computer engineer??" The other option is: "Boring stuff". Uffff...

We still mix email (like that, in English) with other forms, including the most accepted one "electronic mail" (but in Spanish).

As for messages, we say: "I sent him a s-m-s", but now most commonly: "I sent a whatsapp". Like that, no translations.

BTW, I like hyphens, make things seem more sophisticated (though I think it'll happen what Bruce says here: they will disappear together with the "e").

Another vote for eLearning. We dropped the hyphen internally when we started developing content for our LMS about 4 years ago. We needed consistency so landed on eLearning and have stuck with it ever since. I agree with everyone else that it shouldn't matter what you call it as long as you're consistent. I also remember when we all used a hyphen for email

I suspect, as others have suggested, that we'll drop the hyphen but I imagine eventually also the capital 'L'. I wonder how long it'll take?

PS... hmm... should probably stop using "cents" since the penny's been eliminated in my currency... soon no one will know what that means! Ahhh... evolution.

i think elearning is right

Just 'learning'  or 'training stuff' is easier to say for your average person.

A point to remember is this 'The iphone is not the last phone to made.'

Eventually there will be another form of learning coming along and we'll be saying 'Do you remember elearning?...Oh yeah..)

Wow, there are a lot of posts on this subject!

I tend to follow the organizational stance on the word with one exception: if we use the hyphenated version (e-learning) in a title (of any kind), then we should go with all capitals or captilize the L (example: E-LEARNING or e-Learning).

eLearning isn't a proper word and so not recognised by all screen reading software. For those with accessibility issues or developers using an automated tool for quick and easy voice overs the elearning version sounds wrong. E-learning is pronounced properly and isn't inventing a word. Interestingly, email is in the dictionary as both e-mail and email but clearly a far more popular word. So until elearning appears in all the dictionaries, best to stick to the hyphenated version for the sake of others.

Okay, so a lot of this discussion seems to be focused around the use (or not) of the hypen between "e" and "learning."

However, given the number of job titles that now BEGIN with ... it. Is there now a generally accepted way to call oneself , for example, which would it now be considered...

( I recently got busted for calling myself an eLearning Instructional Designer, but then, two jobs later....  Elearning Developer... in my resume, and I/m trying to correct it)

I use eLearning, however, I agree that it doesn't really matter as long as it is used consistently.

I've noticed that Articulate uses E-Learning, however, I think that they should consider dropping the hyphen as it will (subtly) help encourage the progression outlined in Nicole's message above.

Most of my clients simply refer to it as 'training' or 'learning'. Which I love, as the focus shouldn't be on the delivery mechanism - it should be on what is being delivered.

Personally, eLearning doesn't make sense. :) Seems it should be e-learning or elearning.

I use E-Learning in headings because it looks odd to not have the hypen with the big E small l.

But I use elearning in the body text.

True, in the same way that eMail doesn't make sense.  Good point Tom, thanks for another perspective on this.

Elearning looks odd to me at first glance, but I think that might be because I'm not used to seeing it written that way. I wonder if it would stand out to those who don't have much to do with elearning? I suspect not. I know that Email doesn't look odd at the start of a sentence (but eMail certainly would!)

This article, regarding the hyphenation of e-mail raises an interesting point about consistency when making such decisions and leads me to reconsider my thoughts on this.

Tried REALLY hard to resist joining in on this thread but as it's a term I have to use every day the inconsistency of use is annoying to say the least. Clearly like all languages English is constantly developing but making stuff up just so you can be consistent in your own organisation is not a brilliant way to go.

Hyphenation is an accepted solution in English for creating new hybrid words. E-mail and e-learning are examples where the hyphen has a role to play. See below:

"As ‘e’ represents ‘electronic’, e-mail is formed from two words, so this suggests that we should not then run one into the other to form ‘email’. It is a compound noun, where the first adjectival element is reduced to a single letter, just like T-bone steak and not Tbone!" Source: http://www.future-perfect.co.uk/grammar-tip/is-it-e-mail-email-e-mail-or-email/

Most dictionaries seem to use e-learning as the main entry but list other spellings too. Eventually these words might lose their hyphens - email for example is listed in the OED as email with e-mail listed as an alternative usage so clearly in that case the tipping point has been reached.

I personally prefer to keep the hyphen, for now at least, but what I really don't like (and Tom Kuhlmann agrees) is 'eLearning' or indeed 'e-Learning'. There is no precedent in the English language (wherever you are on planet Earth) for inserting a capital letter into a noun. This is something only marketing people do when dreaming up trendy new product names! 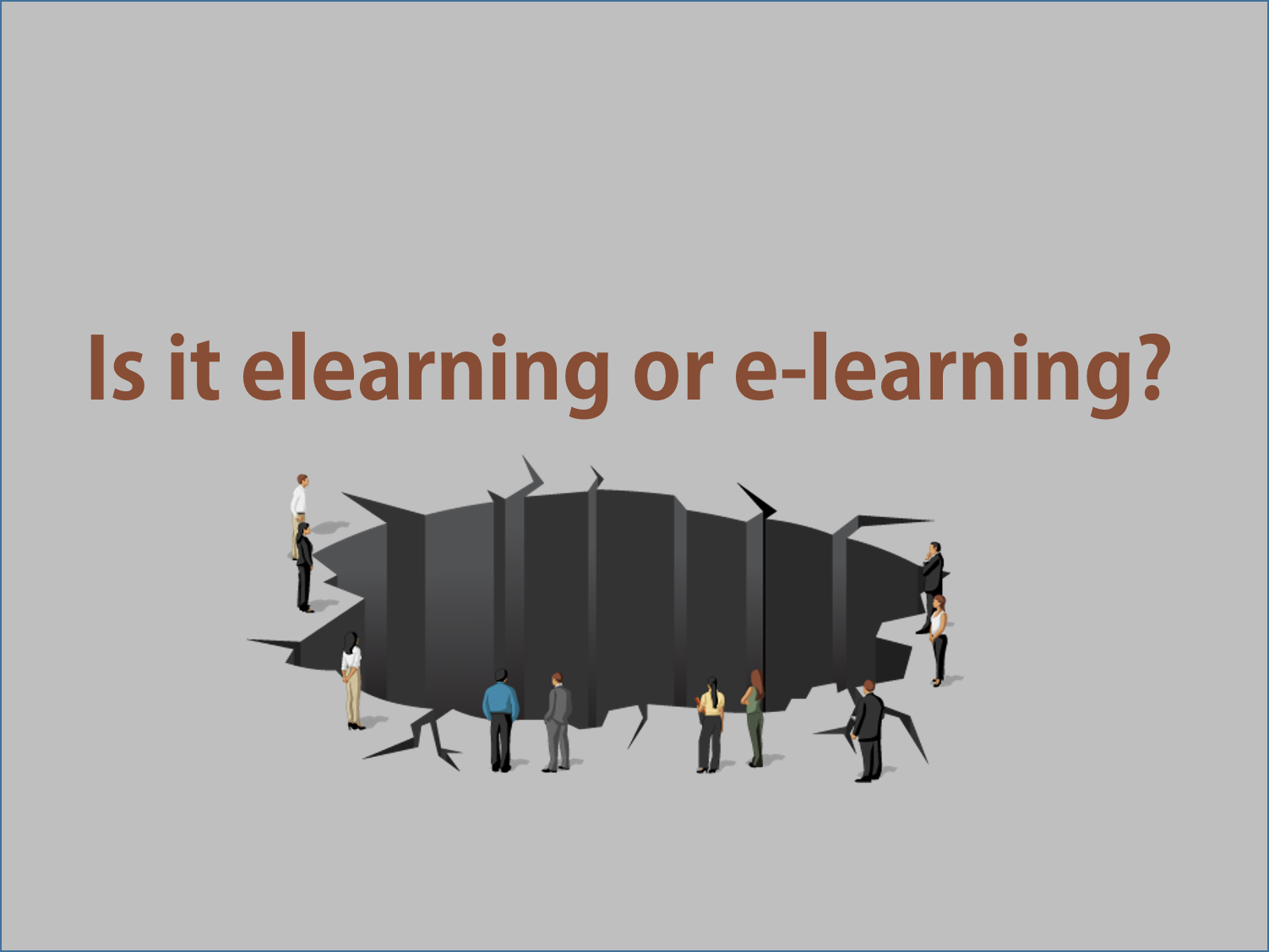