States let you change the appearance of an object based on a learner's actions. For example, you might enlarge a button when learners hover over it or add a glow effect when they click it. You can even change character expressions and poses with states.

By default, most objects in Storyline 360 have one state (buttons have five), but you can add as many as you want.

Starting with the May 2022 update, you can rename custom and built-in states. This is especially helpful when you need to change the name to a more descriptive one or quickly correct a typo. Here's how.

As of the May 2022 update, you can arrange custom and built-in states in the order that works best for you and aligns with your design. Here's how easy it is to rearrange states. In the States panel, simply select the state and drag it to your preferred location. Nothing else, and no need to click Edit States!

When you're working with an image, you can quickly create a series of states for it by importing multiple pictures all at once.

The name of each picture file you import becomes the name of its state in Storyline 360. For example, a picture named Custom 01.png becomes a state called Custom 01 in Storyline 360. And if the file name corresponds to a built-in state, such as Hover.png or Visited.jpg, it automatically functions as that built-in state, so you don't need to create any triggers to make it work.

To save time when you need to edit states for multiple objects, use the Editing states on drop-down on the far right side of the States panel to switch between objects on the same slide. (As you scroll through the items in the list, Storyline 360 outlines them in red, so you know which object you're selecting.) Your changes to all objects will be saved when you click Done.

On the other hand, character states (expressions), must be triggered. (Visit this article for detailed descriptions of each built-in state.) Custom states must also be triggered.

To learn about triggers, visit this user guide. 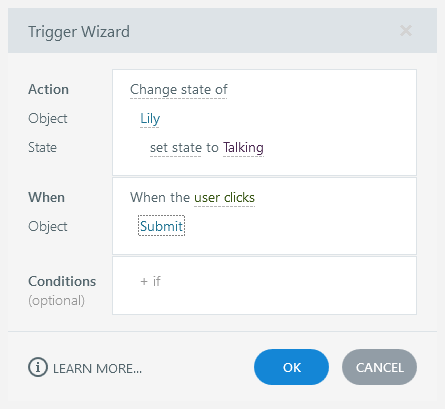